Facebook Twitter Copy URL
Copied
'If you try to burn this house down, you're in for one hell of a fight,' Alan Peter Cayetano tells the camp of his rival Lord Allan Velasco

Taguig-Pateros Representative Alan Peter Cayetano on Monday, October 12, rejected the election of Marinduque Representative Lord Allan Velasco to replace him as House Speaker in a vote lawmakers earlier held at a sports club in Quezon City.

Cayetano said Velasco’s election by 186 members of the House of Representatives was unconstitutional because it was held outside the chamber’s session hall at the Batasang Pambansa in Quezon City. 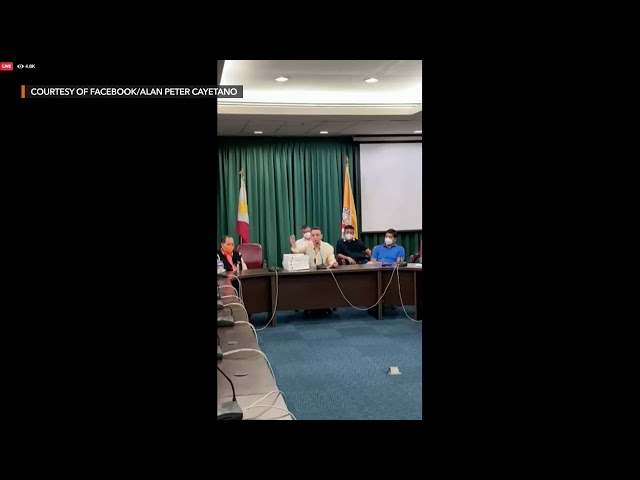 The move by Velasco and his allies “creates a very, very disturbing precedent” that would reduce the country to a “banana republic,” Cayetano added.

The rules of the House state that lawmakers can elect a new Speaker only during session. By Cayetano’s move, the House session has been suspended since October 6. It is expected to resume on Tuesday, October 13, because President Rodrigo Duterte called for a special session to prevent a delay in the passage of the 2021 national budget bill.

Senators and other sectors earlier expressed concern that the rivalry between Cayetano and Velasco would result in a delay of the budget bill, and force the government to operate on a reenacted budget in 2021.

Cayetano called the meeting at the sports club nearly 5 kilometers away from the Batasang Pambansa a “fake session.” He accused lawmakers who attended it of breaking government health safety protocols on the COVID-19 pandemic.

“It’s really a travesty,” Cayetano said of the Velasco camp’s move. Cayetano said his primary concern is the welfare of the House and the country. “Don’t throw the Constitution into the waste basket,” said Cayetano, addressing Velasco and his allies. “But [if] you try to burn this house down, you’re in for one hell of a fight.”

Cayetano said he would welcome the House majority’s decision on the speakership – whomever they would favor – if done during a proper session. The way Velasco and his allies held their meeting seemed meant only to cause “gulo” or discord, Cayetano added.

Passing the budget bill will be the priority during the House’s special session from Tuesday to Friday, October 16. Cayetano said the measure can be finished in 2 to 3 days, after which the House can settle the speakership issue.

“If they want to elect an absentee who’ll start from scratch on the budget, then that’s up to them. Wala tayong problema doon (We don’t have a problem with that),” Cayetano said.

Asked by a reporter whether he would have the numbers to get reelected as House Speaker, Cayetano said, he had 205 House members who signed their support for him. Velasco getting 186 votes meant there were some 80 members who “voted twice.”

However, Cayetano insisted that the more relevant rule on the matter is that “voting has to be in the session hall” of the Batasan Pambansa.

186 lawmakers elect Velasco as Speaker while House session is suspended Cayetano and Velasco earlier agreed to a “term-sharing” arrangement on the House speakership. However, as the agreed end of Cayetano’s term neared, he refused to cede his post unless Velasco shores up the support of a majority of House members.

Cayetano’s suspension of session on October 6, more than a week ahead of schedule, was seen as a move to prevent Velasco from staging a takeover on October 14 – supposedly the appointed date of their handover of the speakership.

The suspension of session at the House pushed back the passage of the budget bill on 3rd reading from October 14 to November 16, when Congress is scheduled to resume session. Several senators including Senate President Vicente Sotto III raised the alarm over this, saying it would have left them too little time to finish their work on the budget bill on schedule.

If the 2021 budget bill is not passed before the year ends, the government would be forced to operate on a reenacted 2020 budget, which would not be responsive to the pandemic.

Last week, Duterte called on Congress to hold a special session from October 13 to 16. Sotto said this was addressed to the House, since the Senate has not yet suspended session.

Duterte told lawmakers to fix the delay in the budget bill and resolve the speakership tussle, otherwise he would intervene in the matter. – Rappler.com