After the rollout of the national COVID-19 vaccination program in Metro Manila, Cebu will begin inoculating residents in the city and province starting on Wednesday, March 3.

The Department of Health Central Visayas (DOH-7) said 2,900 employees would be eligible to get the vaccine, although some employees are hesitant to get Sinovac – the only vaccine in the country at the moment – due to concerns over its efficacy rate.

The national government earlier said health workers could wait for the AstraZeneca vaccine, slated to arrive in the Philippines in the second week of March.

Cebu City is among the 3 priority areas named by the national government for its vaccination program, along with Metro Manila and Davao. 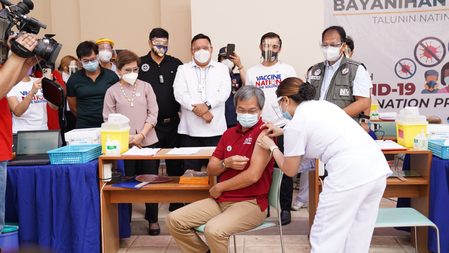 According to an initial survey by the DOH-7, 5,634,789 people are eligible for vaccinations in the Central Visayas region in 2021. The health department hopes to vaccinate at least 70% of the population or more by the end of the year, and the other 30% in 2022.

Central Visayas is home to about 7 million people and includes Metro Cebu, the second biggest metropolitan area outside of Metro Manila.

According to Mel Feliciano, the Inter Agency Task Force (IATF) for COVID-19’s chief implementer in the Visayas, Cebu City had already submitted its priority list to the task force.

“We will finalize the vaccination program of [Cebu City], and it can just be replicated to municipalities and other cities,” Feliciano said.

Although the first city outside Metro Manila to receive vaccines, Cebu City remains among big cities in the Visayas that do not have a tripartite deal with other brands.

Smaller cities like Ormoc, Bacolod, and Iloilo all have signed agreements for AstraZeneca, aside from the vaccines allocated by the national government. Feliciano said the regional IATF will be in charge of distributing vaccines procured by the national government in different areas in Cebu and the Visayas region.

This is a separate vaccination program from those planned by local government units who have sealed their own tripartite deals with their preferred vaccine manufacturers.

The recently set-up Visayas Vaccination Operations Center in Mandaue City will oversee the vaccination program for the entire Visayas region.

The Sinovac vaccines are scheduled to arrive at the Mactan Cebu International Airport on Tuesday morning, March 2, and will be sent directly to a storage facility before it is brought to VSMMC for distribution.

Cebu City is currently in the middle of a COVID-19 surge, with new daily cases in the rising to the triple digits in February. While it was previously thought that the surge was due to holiday activities, the DOH-7 later said they believe “mutations of concern,” discovered by the Philippine Genome Center in February, might have something to do with the continued spike in cases – although it’s not confirmed yet if the mutations were considered a variant.

Cebu City currently has 2,974 active cases – much higher than the 101 active cases recorded last December 25, 2020, about the time before cases in the city started surging again. – Rappler.com