Community pantry in Marikina closes amid fears of police profiling BACKGROUND CHECK? A community pantry in Marikina decides to halt operations amid fears of police profiling.

A community pantry that has been operating weekly in Barangay Jesus dela Peña, Marikina since April 25 decided to pause its operations after the police conducted a background check on the organizer.

Lex Liñga said two police officers who were present in his pantry location in Marikina River Park on Sunday, May 9, insisted that he fill out their logbook and indicate which organization he belongs to, raising fears he was being profiled.

“Bumaba po sila ng sasakyan, at ang tanong nila, kung ako ang organizer ng pantry, ano iyong pangalan ko, saan ako nagtatrabaho, address ko,” Liñga recounted in an interview with Rappler on Monday, May 10. (They stepped down from their vehicle, and asked me if I’m the pantry organizer, what my name is, where I work, and where I live.)

“They said, ‘Bakit ka ba natatakot e hindi ka naman namin irered-tag’ (Why are you afraid, we are not going to red-tag you),” he added.

Liñga said the police’s activity on Sunday was suspicious since they did not ask information about him or his pantry in the first two weeks of his operation.

“I’m very well aware of the political climate here, especially the attention given to pantry organizers,” he noted in a mix of English and Filipino.

Liñga said while he was aware of his rights, he decided to fill out the logbook due to fear and to get it over with.

He added that the police could not offer a reason why they were asking for his personal information.

The team of Patricia Non, the first community pantry organizer from Maginhawa street, Quezon City, has reached out to Liñga and provided him with legal assistance.

Non has also posted the incident on Facebook, which has over 1,000 shares as of May 10.

She publicly urged the barangay office and the Marikina city government to intervene.

In a text message to Rappler, Marikina Mayor Marcy Teodoro said the police should not get in the way of a community pantry’s operations.

“Pinapaimbestigahan po iyong nangyari kung may liability ang PNP (We are investigating the incident and whether the Philippine National Police has a liability),” Teodoro added.

Rappler has reached out to the Philippine National Police, but has yet to receive a response.

Why is this a cause for concern?

The red-tagging of community pantries sparked outcry in April after Non temporarily halted her charity drive. 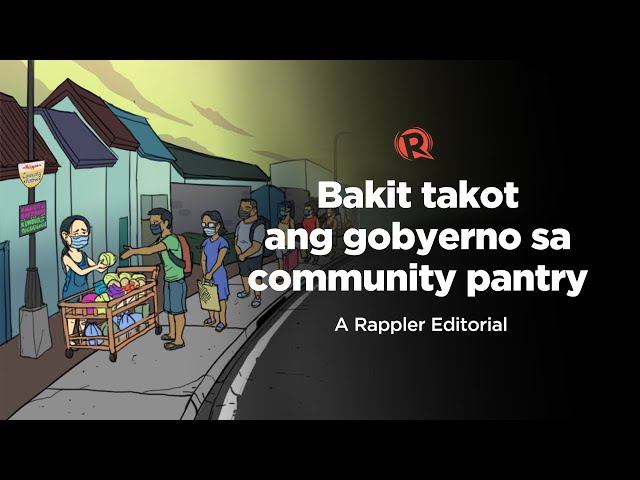 At the time, police also did a background check on her, while the Quezon City Police District and the National Task Force to End Local Communist Armed Conflict (NTF-ELCAC) shared red-baiting posts on their social media accounts.

Non meanwhile has since reopened the pantry after the Quezon City government assured her of her safety. – Rappler.com