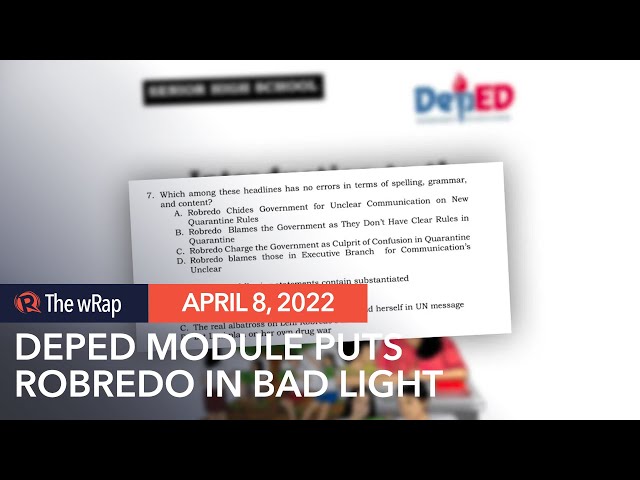 MANILA, Philippines – The Department of Education (DepEd) is again under fire for another learning module mishap, this time involving an activity in the self-learning module (SLM) of grade 11 students that featured presidential candidate Vice President Leni Robredo.

The activity was from the subject “Introduction to the Philosophy of Human Person.” Students were asked to identify which headline has no errors in terms of grammar, spelling, and content. The choices were all about Robredo, which seemed to put her in a bad light without proper context.

Another question, which was about identifying “substantiated generalization,” contained Robredo in all choices: a. “Drug war a massive failure” – Robredo; b. Robredo lies to the world, shames the nation and herself in UN message; c. The real albatross on Leni Robredo’s neck; d. Let Leni plan on her own drug war

The module was made in 2020 but it surfaced online on Thursday, April 7, a little over a month before elections.

“Is this the quality of education we are having in the public? We missed the standard and decency,” Twitter user @BogAhOng1 said.

Meanwhile, Twitter user @MHaramei said that DepEd “must be responsible” over the module.

This was not the first time that DepEd was called out over its learning modules being distributed to millions of students. Since distance learning started in 2020, module blunders continue to surface. The government has allotted billions of funds for distance learning. Asked about the module in an interview with reporters at the University of Pangasinan on Friday, April 8, Vice President Leni Robredo said the incident, if verified, reflected a “very inefficient” DepEd.

At the time she was asked about the issue, the DepEd had yet to respond to the matter, and Robredo herself said she wanted to wait for it first. “Hintayin ko DepEd to comment, pero responsibility nila ito (I will wait for DepEd’s comment, but this is their responsibility),” she said.

Robredo said that in general, the DepEd should be more careful in vetting material released to students.

(DepEd should not release anything – not just because I’m at the receiving end – but anything that poisons the minds of the people, should not go past the DepEd. Because this only shows – if it’s proven true that the modules were released to Grade 11 students – this means that DepEd is very inefficient. This is evidence that they are very inefficient and they allowed modules like this to be released.)

In a statement on Friday, April 8, the Division of City Schools-Manila said that they had already directed school heads to retrieve the copies from students and remove the said module online.

They also admitted that the said module “did not go through their conformance review – as it should – hereby placing mechanisms that should be followed in next productions, if any.”

They also apologized for “any harm or inconvenience that this may have caused individuals or groups.”

“During the review and revision process, we will employ more quality control and assurance processes, with teams focusing both on content and style, so that this occurrence will not surface in the future,” they added.

According to a study done by Tsek.PH, Robredo has been the “biggest victim” of disinformation online, which in turn boosts the image of her rival for the presidency, dictator’s son Ferdinand Marcos Jr. Tsek.PH is collaborative fact-checking project for the 2022 Philippines’ elections.

In November 2020, DepEd made headlines over its modules “body-shaming” Angel Locsin, also a vocal critic of the Duterte government. This prompted the DepEd to issue an apology to Locsin. (READ: DepEd apologizes for module ‘body-shaming’ Angel Locsin) – With reports from Ahikam Pasion/Rappler.com