Drilon said the need to fund government programs on the COVID-19 pandemic, social welfare, housing, and recovery from recent and upcoming typhoons is more urgent than the anti-communist campaign.

“We need more funds for the social aspect of our governance rather than the security aspect. I am not saying that we do not need to support our security sector. We have to. But the allocation for the anti-insurgency campaign can be postponed for one year, hindi ba (right)? The insurgency problem has been with us [a long time]. I don’t think our programs will collapse if we postpone the P19-billion anti-insurgency fund to 2022,” Drilon said.

In its current form, the proposed 2021 national budget has its priorities “askew,” he added.

“The minority will propose a realignment of the anti-insurgency fund in order that we can set the correct priorities in the budget, and that is principally to address the COVID pandemic, and the calamities brought about by Rolly and the forthcoming storm Ulysses, and the housing needs, and the DSWD (Department of Social Welfare and Development) budget for the ayuda (assistance),” the senator said.

“The 2021 budget cannot be a business-as-usual budget,” Drilon added.

Other opposition senators Risa Hontiveros and Francis Pangilinan have made similar calls to realign the anti-insurgency budget to assistance to storm-hit communities. The 4th minority senator, Leila de Lima, is still in detention, but is able to propose measures and make statements from her cell at Camp Crame in Quezon City.

Drilon said the government needs to allocate more money for COVID-19 vaccines, because the P2.5 billion originally proposed by the executive branch, or even the P8 billion in the augmented version of the House of Representatives, “is just grossly inadequate.”

To achieve herd immunity from the coronavirus, 60% to 70% of citizens need to be inoculated, according to the Department of Health (DOH). Supposing a cost of P500 per person, Drilon said the government would need P32 billion to P35 billion to administer the vaccines to some 60 million to 70 million Filipinos.

“Admittedly, it cannot be done in one year because we are not prepared. So let us put it in two years…. My proposal is to increase the vaccination budget to about P16 billion to immunize at least one-half of what is required to have a population immunity,” said the senator.

He disagreed with the decrease in the DOH’s proposed budget from a total P180 billion in 2020 to just P131 billion in 2021, per the executive’s National Expenditure Program (NEP).

“We expect it to cause extensive damage. The 2021 NEP did not anticipate that. Therefore, we must have a bigger budget to address these calamities,” Drilon said.

He added that he is “open” to Senator Grace Poe’s proposed measure to allocate 3% of all national revenues to disaster preparedness and response.

Meanwhile, the DSWD needs more funds for cash grants to citizens who have lost their jobs during the pandemic, and assistance to micro, small, and medium enterprises. From P171.2 billion in 2020, the DSWD’s proposed 2021 budget, per the NEP, is down to P164 billion, Drilon noted.

The housing agencies are also in dire need of more funds. It needs to build some 6.4 million housing units, but its proposed budget in 2021 is less than P4 billion.

Drilon said the minority will propose to increase the housing agencies’ budget to P24 billion. It will not cover all of the needed 6.4 million homes, but just enough to partially address the problem to avert a crisis, he added.

“Our priorities are askew in this budget,” Drilon quipped.

Besides the question of priorities, Drilon raised the issue of whether the anti-insurgency fund, as a lump sum, is constitutional: Is it lawful to lodge P19.1 billion with the executive-led National Task Force to End Local Communist Armed Conflict (NTF-ELCAC), giving it the discretion on what the fund will be spent on?

“We cannot have a lump sum and leave to the NTF-ELCAC the authority to point to the projects and barangays where these funds will be devoted. The NTF-ELCAC intervention after the budget approval – these are post-budget interventions, which, according to the SC, are not permitted in our system,” said Drilon.

The power of the purse lies with Congress so lawmakers must be given the opportunity to examine specific allocations in the budget.

“That is what the anti-insurgency funds look like today – it is a lump sum appropriation of P19 billion. We will have no opportunity to examine whether or not these 822 barangays are the ones which need the funds. We will not have an opportunity to check whether these barangays would need farm-to-market roads, etcetera. This is precisely what the SC ruled as unconstitutional in the PDAF cases,” Drilon added.

The NTF-ELCAC’s proposed 2021 budget includes P16.4 billion for its Barangay Development Program. Through this, the task force will implement development programs such as building schoolhouses and farm-to-market roads in barangays “cleared” of communist rebels. The goal is to spur economic development to prevent backsliding into insurgency.

This is the Duterte administration’s final push to stamp out the 5-decade-old rebellion of the Communist Party of the Philippines and its armed wing, the New People’s Army (NPA).

The NTF-ELCAC consists mainly of Cabinet officials and top military and police officers. 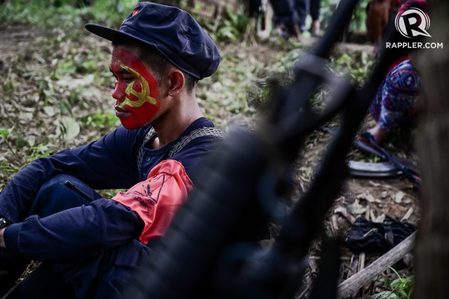 Senator Panfilo Lacson, head of the Senate committee on national defense and security, peace, unification, and reconciliation, said he would push to maintain the proposed anti-insurgency budget.

“I’ll join Senate President Sotto’s call to retain the P16.4-billion allocations to the NTF-ELCAC,” Lacson said in a statement on Monday.

The fund will not be at the disposal of the security sector, but part of the Special Purpose Fund under “Assistance to Local Government Units,” intended to “hold and develop barangays that are cleared of NPA influence,” he added.

Lacson said these efforts will give NPA members a chance to start over, and discourage NPA recruitment especially among indigenous peoples.

The Senate finance committee is expected to sponsor the 2021 budget bill in plenary on Tuesday, November 10. It will be followed by weeks of plenary debates. – Rappler.com