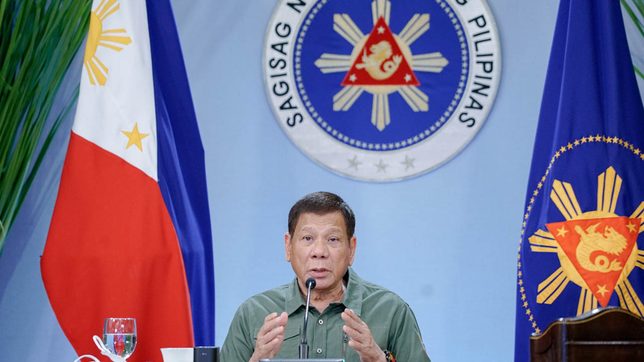 President Rodrigo Roa Duterte skims through a document while presiding over a meeting with the Inter-Agency Task Force on the Emerging Infectious Diseases (IATF-EID) core members at the Malacañang Golf (Malago) Clubhouse in Malacañang Park, Manila on March 22, 2021. KING RODRIGUEZ/ PRESIDENTIAL PHOTO

Roque said he heard Duterte speak of such plans during his meeting on Monday night with pandemic task force officials. The spokesperson attended virtually.

The President also expressed optimism that the talk would be productive.

But earlier on Monday, the Chinese Embassy said there was no need for the Philippines to be alarmed about the vessels since they supposedly were just fishing vessels taking shelter from “rough sea conditions.”

It was the Philippines’ own National Task Force for the West Philippine Sea that believes the 220 ships are actually Chinese maritime militia and that swarming Julian Felipe Reef is a strategy to assert dominance in those waters which belong to the Philippines.

The Department of Foreign Affairs filed a diplomatic protest over the vessels while Defense Secretary Delfin Lorenzana decried it as “a clear provocative action of militarizing the area.”

The Chinese Embassy shot back, calling the Philippine assertions an “unnecessary irritation.”

On Tuesday, the United States said it “stands with the Philippines” on the issue. – Rappler.com