Photo from the Office of Senator Bong Go 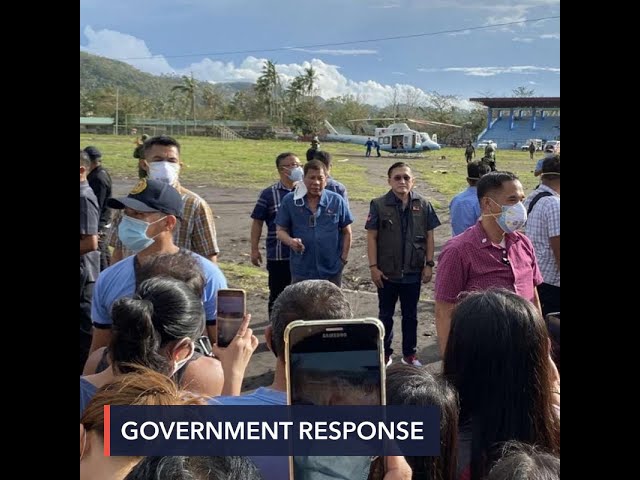 As President Rodrigo Duterte posed in front of a crowd at a sports field in typhoon-hit Guinobatan town in Albay, he took off his face mask in front of people pressed closer together to listen, social distancing rule forgotten.

This was the scene revealed by photos from Duterte’s visit to the Bicol region, the first images of the President since Super Typhoon Rolly (Goni) entered the Philippine Area of Responsibility.

Duterte and his longtime aide, Senator Bong Go, could be seen without their masks, addressing the crowd after the presidential chopper they were riding had landed on the field.

It was not clear how long the two were without masks during their visit. But one more photo showed them walking through a crowd, also sans masks.

Photos of Duterte and Go in the helicopter showed them wtih masks on.

Members of the Presidential Security Group (PSG) managed to ensure more than a one-meter distance between Duterte and the crowd. But among the crowd, there was little to no physical distancing, though most people wore masks.

In two photos, people pressed near each other held up their smart phones to take photos or videos of the President.

(My appeal to our local government unit officials and health authorities… social distancing, the use of masks, and sanitation is important in evacuation centers.)

Maintaining a distance of at least one meter and the wearing of face masks and face shields are among the minimum rules being promoted by Duterte’s own coronavirus task force to curb the rise of COVID-19 infections.

Presidential Spokesman Harry Roque and Senator Go have yet to respond to Rappler’s queries on why Duterte and Go took off their masks during their visit to Albay.

Apart from landing in Guinobatan, Duterte conducted an aerial inspection of Catanduanes, Albay, and other provinces of Bicol late Monday afternoon.

Go said Duterte instructed government agencies to investigate alleged quarrying operations in the area that residents said may have exacerbated impacts of the typhoon.

Netizens had used the hashtag #NasaanAngPangulo on social media on Sunday, the day the super typhoon made landfall.

At least 16 people were killed during the storm. Some P1.1 billion worth of rice, corn, and other crops have been damaged, setting back 20,000 farmers.

After his Bicol visit and aerial inspection, Duterte was expected to arrive in Metro Manila. – Rappler.com