Over 600,000 OFWs mobilizing for Duterte campaign Facebook Twitter Copy URL
Copied
With the marching orders to influence 5 family members back home, OFWs can deliver as much as 3 million votes for Rodrigo Duterte

MANILA, Philippines – Presidential candidate Rodrigo Duterte frequently cites lack of funds as obstacles to his campaign but it seems he is getting more than a little help from Overseas Filipino Workers.

As of writing, around 600,000 OFWs have joined 162 “chapters” worldwide all dedicated to Duterte’s campaign and election day mobilization, according to Arnel Corpuz, an OFW assigned to coordinate such efforts by Duterte’s campaign team.

Duterte campaign manager Leoncio Evasco Jr, who gave Corpuz his role, told Rappler, “In the past few months there was not much effort to consolidate. Now we are putting them (OFWs) in the loop because we feel this is an important sector.”

Since Duterte’s announcement of his presidential bid, these OFW support groups have become more organized.

Recently, they’ve even come up with an official “Rody Duterte Global Supporters” ID bearing the signature of their champion.

Corpuz said some of these groups began in 2014 when Duterte’s presidential bid was just a rumor. From being groups just sounding the call for his candidacy, they are quickly shaping up to be vital organs of Duterte’s campaign machinery.

Corpuz insists the groups are independent, with no ties to any political party.

According to Corpuz, the OFW chapters have been given these marching orders: ensure that OFWs and their families will cast their votes for Duterte come election day, and that these votes are protected and counted. 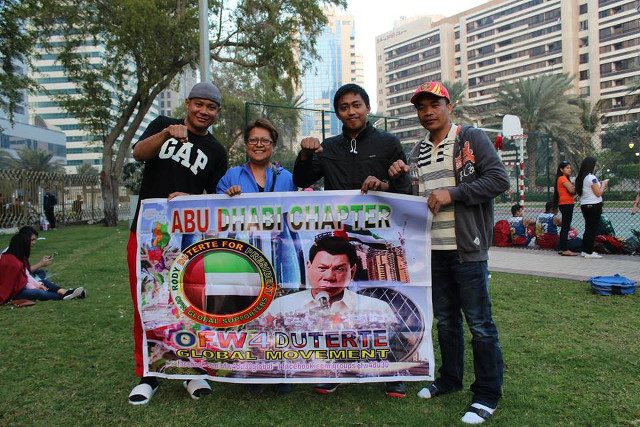 There are 1.3 million registered OFW voters, a “great majority” of whom are for Duterte, said Corpuz.

The OFWs are also encouraged to “produce 5 more votes from their families back in the Philippines,” he told Rappler.

“We are the breadwinner of our respective families and we will be using it to influence our loved ones to vote for Duterte.”

If even just the 600,000 pro-Duterte OFWs are able to influence their target of 5 family members, that’s an additional 3 million votes for Duterte. Past presidents have won by far less.

That Corpuz, a fit-looking man in his early 40s, calls the Duterte campaign the “Great Endeavor” is testament to how seriously he takes his job.

The job entails “24/7” monitoring of chatrooms and web pages of OFW Duterte supporters.

“There are thousands of sleepless OFW volunteers manning their respective chapters,” Corpuz said.

“They formulate their own strategy including online campaign, campaign back home, participation in the OAV [Overseas Absentee Voting] process that will include information dissemination and mobilization assistance if needed [in] faraway areas,” he added.

Corpuz left Australia and his 6-figure salary to help campaign for Duterte.

His efforts, and that of other OFWs, seem to be paying off just by searching through Facebook.

An impressive number of Facebook groups, boasting more than 5-figure membership counts, have come cropping up.

There are groups in Australia (Down-Under Duterte Supporters), Thailand, California, Saudi Arabia, even one specific to Baden Wurttemberg, Germany. 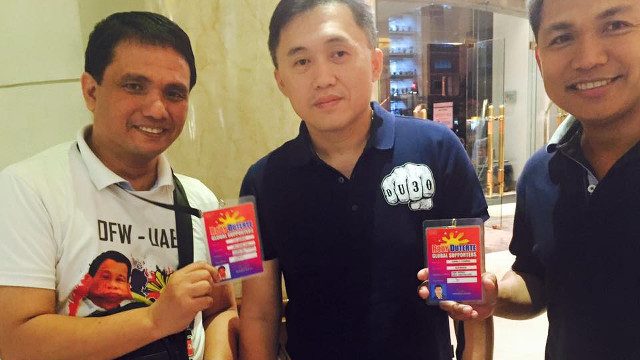 “No one gave orders to form the groups. These are all from OFW volunteers. We have no leader, we just help each other out,” said Corpuz in a mix of English and Filipino.

The squad is blamed for vigilante-style killings of petty criminals in Davao City during Duterte’s years as mayor.

No leader, all volunteers

The insistence that the growth of the movement is mostly organic and not contrived is not hard to believe looking at the activity that goes on in these online groups.

While groups for other candidates feature mostly posts of relevant news articles, posts in these many pro-Duterte groups are more personal.

There are posts calling for orders of specially-made Duterte caps and car plates that proudly read, “DU30.”

Members’ FB profile pictures proudly proclaim they support him. Other candidates (and their supporters) have churned out similar customizable, campaign-bent profile pictures. But the great assortment of pro-Duterte ones, and the disparity in their designs, appear to point to more spontaneous, uncoordinated efforts.

Evasco admits it has been a challenge bringing together the large number of groups supporting his candidate. (PODCAST: Leoncio Evasco Jr on Duterte’s ‘unorthodox’ campaign)

Why does Duterte command the love of so many OFWs?

“Duterte is a silent supporter of OFWs. He did a lot of rescue efforts for distressed OFWs without seeking recognition,” said Corpuz.

Duterte condemned the “laglag bala” (bullet-planting) scam in airports, even saying he would lawyer for the OFW victims. He had harsh words for the administration after a Customs attempt to search balikbayan boxes. 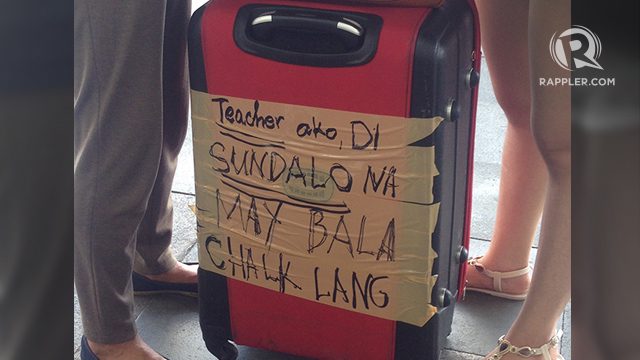 “To be honest, we OFWs feel abandoned by the current administration, including Binay. As far as we know, Binay did not extend any help on OFWs that were victims of laglag bala. Even on the opening of balikbayan box, we did not see him showing real concern for OFWs,” he said.

The so-called “Dirty Harry of the South” also appears to be the only candidate who “could guarantee safety of our loved ones back in the Philippines, just like what he did in Davao,” said Corpuz.

OFWs have seen progressive countries led by leaders with the same management style as Duterte. He’s been compared to Singapore’s Lee Kuan Yew. His “eye for an eye” approach to punishing criminals is perceived by OFWs as being similar to the penal systems in countries like Saudi Arabia.

Corpuz himself is all thumbs-up for Duterte’s federalism pitch because he’s seen the system work in Australia, his home for the last 10 years.

With close to 3 months to go until election day, Corpuz and other Duterte supporters far from home still have a lot of work to do.

But he’s sure of one thing.

“OFWs and their families will be the game changer of this election. We have been neglected for a very long time and in this year’s election, we will play an active role in changing the future of our country.” – Rappler.com