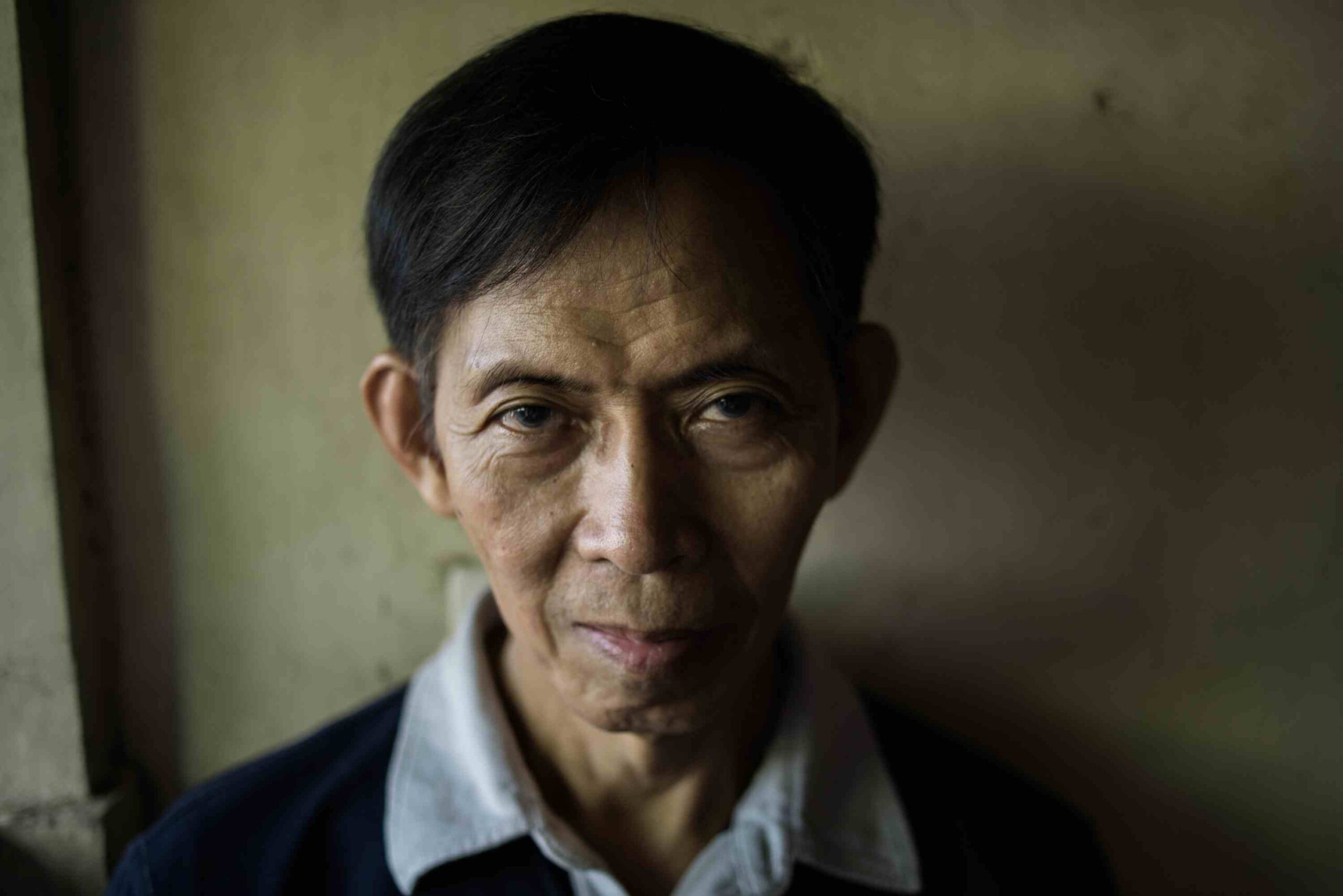 Facebook Twitter Copy URL
Copied
In what may perhaps be one of the greatest ironies in an already surreal election season, the man called the Butcher of Southern Luzon is now castigating Mindanao’s Punisher

MANILA, Philippines – In what may perhaps be one of the greatest ironies in an already surreal election season, the man called the Butcher of Southern Luzon is now castigating Mindanao’s Punisher.

“I am retired Major General Jovito S. Palparan Jr, 65 years old, going 66 in September. I am a retired army officer, and jobless as of now.”

Palparan is being held without bail for the kidnapping of University of the Philippines’ students Sherlyn Cadapan and Karen Empeño. He denies the charges, and is running for a senate seat.

The former soldier has collected a number of monikers under his belt. Butcher, hangman and godfather are only a few. Under his command, in every area where he led his battalions, the list of murdered activists and alleged communists rose in number. He has been accused by progressive groups of ordering rape, murder and various forms of torture that include waterboarding, beatings, and mutilation.

Palparan went into hiding before he could be arrested. He was caught after a manhunt that lasted almost three years. (READ: People of the Philippines versus Jovito Palparan)

His single-minded crusade against communists has been compared to Duterte’s war on crime. Duterte has long been linked to the Davao Death Squad, a vigilante group that allegedly targets criminals in the city.

The comparison has been rejected by both candidates, both of whom hail from Mindanao.

Palparan calls Duterte a coward and an egomaniac who “likes to be adored.”

“He stands for nothing,” Palparan said. “He does not have principles”

In a three-hour interview with Rappler on Thursday, May 5, at a military detention center in Fort Bonifacio, Taguig, the former major general was contemptuous of Duterte’s strongman image.

For over a decade, Palparan’s face has been printed on the posters carried at protest rallies and pelted with dripping tomatoes.

“I’m not saying I’m a blameless guy, because I’ve made mistakes,” he said. Reports from the United Nations, Human Rights Watch and the government-appointed Melo Commission show that “not blameless” may be an understatement. (READ: The Most Wanted Man in the Country)

Jovito Palparan is the same man lauded by Gloria Macapagal-Arroyo for his crusade against “our enemies.”

“In the provinces under the control of the Armed Forces’ Seventh Division Jovito Palparan continues to battle our enemies,” Arroyo said during her 2005 State of the Nation Address. “He will not back down until the communities he serves are released from the darkness of fear, able to rebuild their lives in the dawn of justice and freedom.”

Palparan is not permitted to leave detention to campaign. He has accepted he will not win. It does not matter, because his candidacy can now be a platform for sending a message to presidential front runner Davao City Mayor Rodrigo Duterte.

“I wasn’t going to speak. I wasn’t going to ask. The problem is I don’t want to be silent anymore. I know this – I’m also a law enforcer just like him, so nobody can say I don’t know the truth.”

The people who choose Rodrigo Duterte, says Palparan, “do not know Duterte.”

“He’s just being advertised as someone who is just macho. He created his own image, his own persona. He’s a coward. He befriends people who have power.”

Today, Jovito Palparan sits inside a room at a detention center. The room is small. There is a table and a few plastic chairs. One window opens to the distant towers of McKinley Road.

He is wistful as he looks out the window. He says he misses the freedom to eat where he can. McKinley has good restaurants.

He wakes up late every morning for breakfast and exercise, then sits waiting for lunch. There is television in the afternoon, and conversation with the other detainees. Sometimes he cooks, whenever there are supplies from friends and family. Then dinner, the primetime news shows, then bed. It is the same every day, unless there are scheduled hearings and he wakes up early in the morning for the two-hour trip to the Regional Trial Court Branch 15 in Malolos, Bulacan.

He had hoped to campaign before the elections, but the denial of his bail put paid to his plans. His son took a video of him one day reciting his campaign platform, but his lawyer advised against its release.

“He said it may have been libelous. I said, I’m already in detention, what’s a libel case to me?” 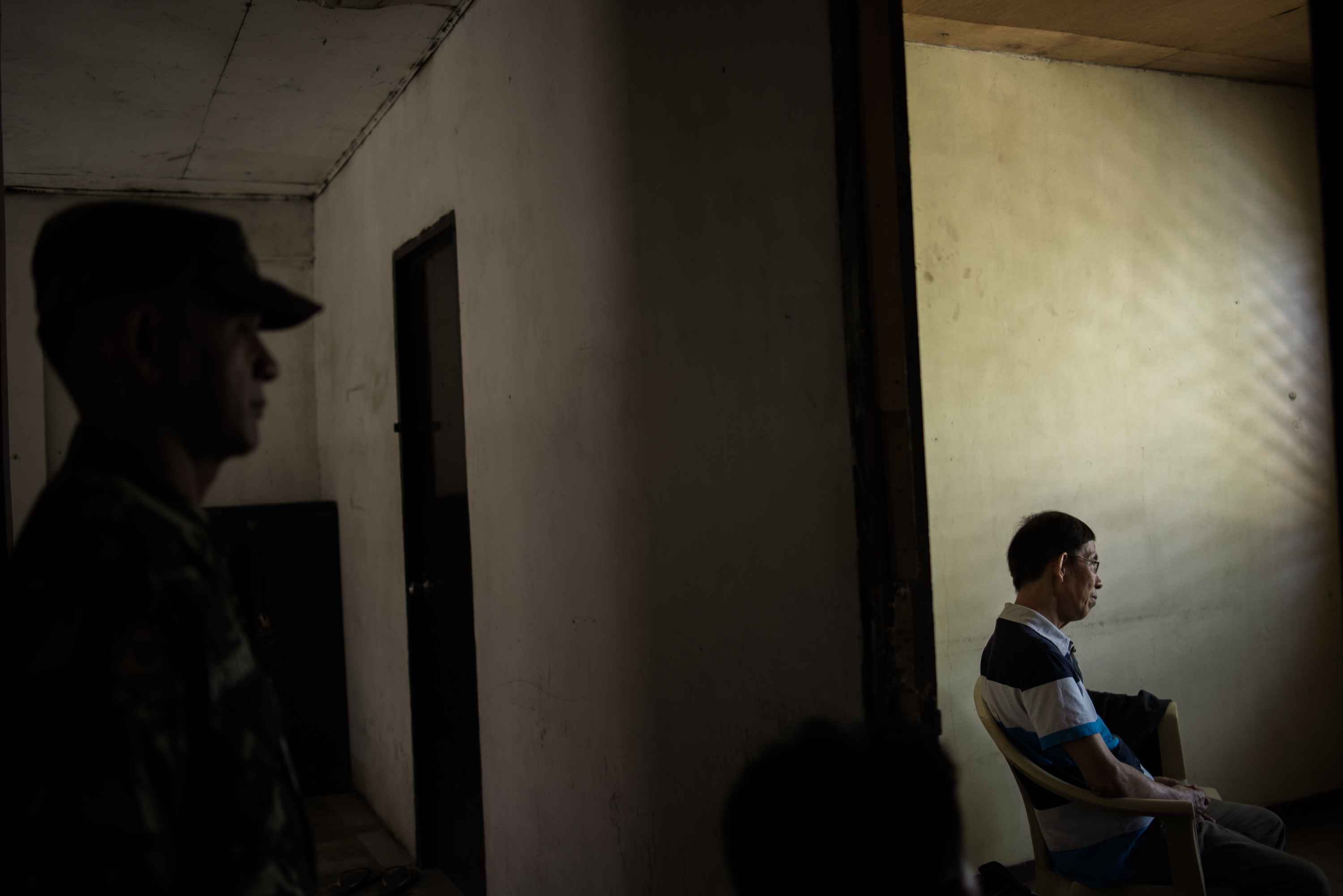 The divide between Duterte and Palparan is largely on the issue of the communist agenda.

“Yes, I coddle the Reds,” Duterte said in an earier statement. “They are Filipinos after all. I also coddle the other Filipinos who have been categorized to belong to the 3 other major colors representing the national flag – blue, yellow and white.” (READ: Duterte to Palparan: I embrace Filipinos of all colors)

Duterte has gone so far as announce he has managed to convince the Communist Party of the Philippines, through its exiled chairman Jose Maria Sison, to declare a ceasefire once he becomes president.

“I talked with Sison last night on Skype,” Duterte said on April 27, less than two weeks before the elections. “The military in the other room did not know I was talking to Sison. Since 1970 I’d been listening to Sison because I was among the first members of the Kabataang Makabayan. Now, I am 70 years old, still there is war. He was my teacher, so I told him, sir, please come home, let’s talk. We are always at war, what will happen? So he promised to me if I win the presidency, he will come home and I will bring him here, let’s have a program.”

Duterte’s platform includes an end to crime within 3 to 6 months. He says he will do whatever it takes, and has gone so far as to promise the deaths of at least 50,000 criminals by the end of his term. He is careful to differentiate criminals – described as rapists, drug lords, and murderers – from members of the New People’s Army, the armed wing of the CPP. 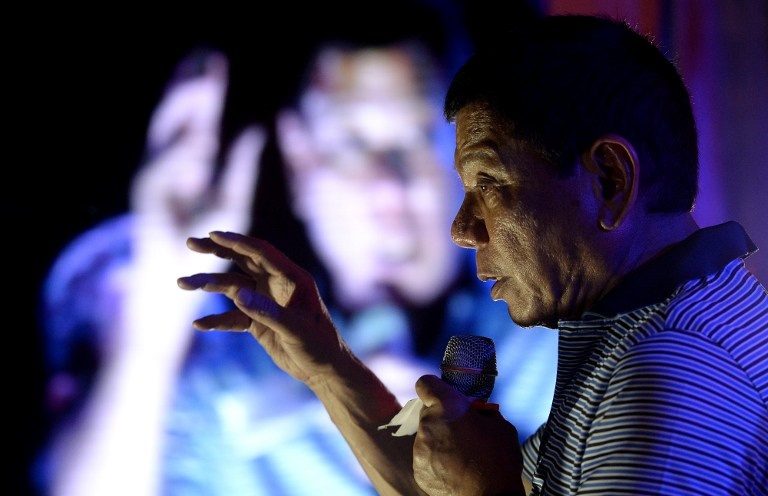 “One is for pocket,” he said, “and the other one is ideology.”

It is a delineation that Palparan denounces.

He agreed communists are different from criminals, but it is because he believes criminals are less dangerous.

“They want something, so this can be addressed by some programs in the government. So that’s why criminals go off and on, different people in one time, so it takes a short period of time and other syndicates will come out. It’s not a sustained effort of the same group of criminals, unlike the NPA.”

The NPA, says Palparan, is a highly organized group of terrorists.  He calls their programs “deceiving,” misleading innocents into joining their efforts. Although he says he has always been willing to negotiate “if they are sincere,” he says they are armed and “will kill when people don’t follow them.”

“It’s a lot more dangerous than criminals,” he said. “Criminals want money, and after they get money, they enjoy, and sometimes that’s it.”

Duterte, in an earlier statement, called Palparan’s stance against him “a perfect example of the bigotry which has afflicted our country like a scourge.”

Davao: ‘Not a paradise’

Palparan also rejects Duterte’s claim of competence, and his presentation of Davao as “exhibit A.” (READ: The Imagined President: The Punisher)

“There are always incidents in Davao,” he said. “It’s not true that Davao is a model for anti-crime or anti-drugs. It’s not a model, it’s just a story, it’s just propaganda, it’s just promoting ego of the mayor but people don’t know that.”

“Davao is not a paradise. There are drugs. There are criminals. There’s killing of whoever’s enemy, and there’s the NPA. Police have been kidnapped there, how can you call it a paradise if your own police are being kidnapped by your NPA friends?”

Palparan said the reason that Duterte has not been charged is because his targets don’t have the ability to stand against him. “He always has an excuse whenever he backs down.” Palparan denies there are similarities between himself and the mayor of Davao.

“They call me The Butcher because the militants say I kidnapped, or when they say I kill. I don’t kill. I perform clean-up strategies and people die because they fight back… Duterte’s killing isn’t for order. He does it for himself for the applause, for the fear, so it’s ego. It’s for his own purpose because he doesn’t really have to kill.”

Duterte has said in speeches that he would issue pardons to policemen and soldiers who kill criminals, as they are on his “personal order.”

“He says he’ll kill all the criminals,” Palparan said. “So people say, okay, they’re just criminals. It’s like he decided on all the criminals already, but really he can’t do that. He knows he can’t. There are laws and many will be angry because you are a president, not a king – you have to follow the law. You cannot decide all by yourself.”

“When you are the president, your boss will be the people, and there is a law you have to follow. So if you say ‘I’ll kill all of them,’ you’ll disregard the law and the sentiment of the people.”

Palparan has choice words for the mayor, although he does not believe Duterte deserved the post – “he supported the communists in Davao City, so nobody else could campaign in their territories” – much less the presidency.

Palparan was generous with his advice should the mayor become president. Address corruption. Limit campaign spending. Reform the Commission on Audit. Make high quality the standard for public bidding instead of lowest offer. Uphold the rule of law.

At the height of Palparan’s popularity, the former commander of the 7th Division of the Philippine Army insisted that communism “has got to vanish.”

He called it “a monstrous and bad idea” that “should not exist.” A communist, he once said, could be distinguished by body language – and that all moderates become communists in the end.

“I encourage people victimized by communist rebels to get even,” he told media before his arrest. “The killings are being attributed to me, but I did not kill them, I just inspire the triggermen.”

The same sort of ideological commitment is present in the Duterte campaign.

No criminal can be rehabilitated, Duterte told Esquire. In his city, every criminal is “a legitimate target for assassination.”

“You know, guilt is personal,” he said in 2005. “Guilt is personal. There is no guilt by association just because I’m the mayor talking here nonsense. Each time I threaten them, there’s always a qualification: “You terrorists, fuck you, I’m going to kill you!’ As you see, they end up dead.”

If anything, there is a fundamental quality to both strongmen. Both are charismatic men who have the capacity to inspire their constituents.

The retired general said he is not against helping Duterte should the mayor he called a coward win the presidency.

“Even if you’re not desirable as a president, I hope you become desirable for the sake of good governance. I would say if you need me, I will be there, but if you don’t I won’t volunteer. I’m just saying this. I won’t volunteer, but if you ask for me, and there’s sincerity – though you may just call me and then put me in danger – I’ll think about it.”

Palparan said he would have volunteered to join Duterte’s new government for the sake of the people, “but it might be too ironic.” – Rappler.com