Supporters of the Bongbong Marcos-Sara Duterte tandem took to the streets of Cagayan de Oro on Sunday, November 21, as a show of force in the city that became the seat of the opposition in Mindanao during the Martial Law years up to the 1986 EDSA Revolution.

The city is also where the founder of the ruling PDP-Laban, the late former senator Aquilino Pimentel Jr., fought Marcos’ father as mayor.

Sunday’s simultaneous caravans marked the first time for Marcos and his running mate, the daughter of President Rodrigo Duterte, to appear in a political sortie together in Tagum City, Davao del Norte. 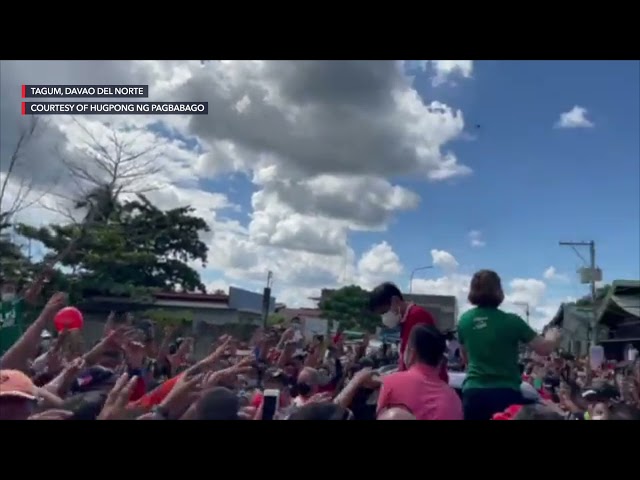 The “BBM-Sara Uniteam” caravan started in uptown Cagayan de Oro and snaked through major roads and the highway that links the city to Butuan in the east and Iligan in the west.

The participants came in red, a color associated with the Marcoses, and the long line of supporters on motorcycles and in automobiles caused traffic jams.

Police have yet to give a crowd estimate as of this posting, but organizers said a day earlier that they expected at least 10,000 people to participate in Cagayan de Oro alone.

At least 16 groups from Cagayan de Oro, other parts of Misamis Oriental, and Iligan took part in the activity staged simultaneously with other caravans in the Visayas and Luzon.

Tagum also saw hordes of Bongbong and Sara supporters taking to the streets.

The two joined the Tagum motorcade, touted to be the longest so far in Davao del Norte, organized by Marcos’ Partido Federal ng Pilipinas (PFP) and Lakas-CMD, a party that the Davao City mayor chairs.

“Let’s continue to unite and foster positive relationships for the common good of our country,” read part of a statement released by Romualdez’s office. 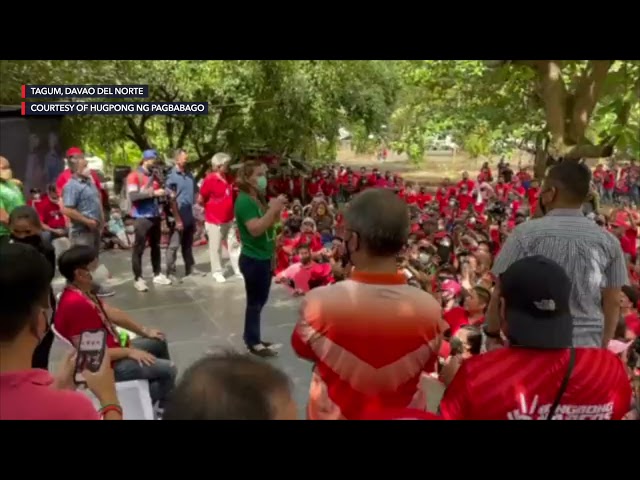 The caravan, mostly participated in by motorcycle riders, started in Barangay Guadalupe in Carmen, Davao del Norte, all the way to Lapu-Lapu Street in Tagum City.

At the Cuntapay Compound, Marcos in red, and Duterte, clad in a green shirt, raised each other’s hands.

But no BBM-Sara caravan took place in other key areas in Mindanao.

Plans to hold similar activities in the provinces of South Cotabato, Sarangani, Maguindanao, Cotabato, and Zamboanga Sibugay, and the cities of General Santos, Koronadal, and Zamboanga were called off, read an announcement by Datulna Benito Mamaluba Jr., leader of Team BBM 2022 in Soccsksargen.

There was also none in Sara’s city, Bukidnon province in north-central Mindanao, and Surigao City or Surigao del Norte in the Caraga region. – with reports from Antonio Manaytay, Grace Cantal-Albasin, Rommel Rebollido, and Roel Catoto/Rappler.com