CAVITE RALLY. A massive crowd of around 47,000 supporters of Vice President Leni Robredo pack the General Trias Sports Park in Cavite on March 4, 2022. 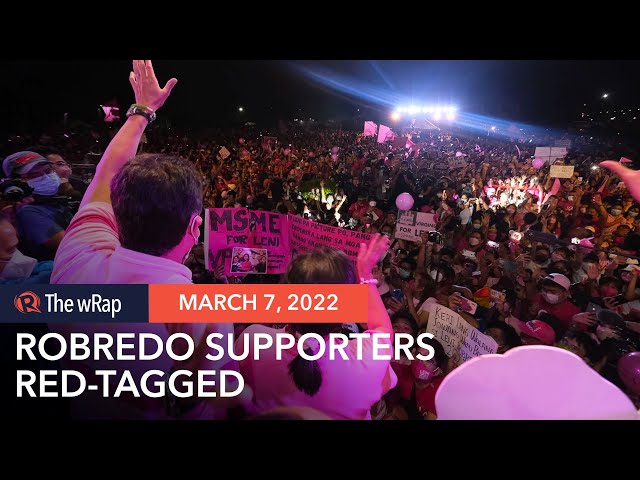 MANILA, Philippines – Cavite 7th District Representative Jesus Crispin “Boying” Remulla alleged some attendees of a massive campaign rally of 2022 presidential candidate Vice President Leni Robredo in Cavite on Friday, March 4, were paid and were “hakot” crowds, or people who were not residents of the area.

Remulla then went so far as to red-tag some attendees, claiming they were members of communist groups.

In a DZRH radio show on Saturday, March 5, Remulla questioned the huge turnout in Robredo’s rally in General Trias City, Cavite, that was pegged at 47,000 people.

(The tactic that stood out for me was the bandwagon. Because it’s gathering crowds from other places. They would get these people, and the rally organizers would say, there were lots of people. But those were hakot.)

He alleged that in Cavite, there was a politician who paid attendees of a recent rally P500 each. “May jeep, tapos may staging area, may T-shirt, may uniporme, kumpleto. Kaya alam mong hindi indigenous kasi naka-uniporme. ‘Yun ang hakot eh.”

(They came in via jeep, there was a staging area, they wore campaign T-shirts, they had uniforms, the works. You know they were not indigenous because they wore uniforms. That’s hakot.)

Remulla then volunteered, “Ang uniporme nila, siyempre, pink.” (Their uniform, of course, was pink.) Pink is the campaign color of Robredo in her presidential bid.

Asked when the rally he was referring to happened, Remulla said “last night,” which was March 4.

Afterwards, Remulla said there were student activists from the Left who joined the rally. He claimed that these activists were “trained” by the National Democratic Front (NDF), which negotiates on behalf of the Communist Party of the Philippines (CPP).

“Ang dami nilang mga estudyante, ‘yung mga aktibista, galing sa kaliwa, oo. Mga trained ng NDF, o kaya training nila. May dalang mga bandera pero pink.” (They have many students there, the activists from the Left. They were trained by the NDF. They brought banners but these were pink.)

Remulla agreed with the radio hosts and guests in claiming that the Robredo camp and the Left have already “joined forces.”

Yellow is the color associated with the Liberal Party, which Robredo still chairs. Robredo, however, is running as an independent candidate in 2022.

In a tweet on Sunday, March 6, presidential candidate Panfilo “Ping” Lacson – who hails from Cavite – shared his thoughts while retweeting a news article on Remulla’s allegations. The senator argued that a government forming a coalition with communist groups would be “worrisome.”

“This is worrisome. A coalition government with the CPP-NPA-NDF will set back the gains of the government’s efforts to end the country’s decades-old insurgency problem,” he said.

Hours later, Lacson said he was getting criticism for his tweet. However, he added in another tweet: “There must be basis for the age-old quote – ‘truth hurts.’ I care for my country that continues to suffer from the longest-running insurgency in the world. I just want it to end.”

In a statement on Sunday, the group said the accusations are malicious, damaging to their reputation, irresponsible, and baseless.

(The difference in beliefs and opinion is not a pass or license to disrespect, trample on, or belittle the capacity of Caviteños to take a stand and sacrifice for the truth, change, and progress that each of us want.)

Some of the organizers and volunteers also pushed back on their own social media accounts.

She Pinpin-Arca said in a Facebook post that they were only relying on people who were willing to help the Robredo campaign in Cavite. She also said no talent fees were paid to performers in the rally.

(It’s sad that even though you do what’s right, there are people who accuse you of corruption. All of those who went to the rally used their own money to support VP Leni and Senator Kiko [Pangilinan]. Not everyone is lured by money. Many people take action and do good things without expecting anything in return.)

Another organizer of the Cavite rally, provincial board member Kerby Salazar, said Remulla’s accusations and Lacson’s take on the issue are worrisome.

In retweeting Lacson’s comment, Salazar said, “And you accusing us is more worrisome. You could have asked us. Ang taas pa naman ng respeto ko sa ‘yo (I had such high respect for you).”

Party-list group Akbayan also said Remulla’s red-tagging claims are “patently absurd.” In a statement on Sunday, Akbayan added that it “will not allow this blatant lie to pass.”

At the same time, the group disassociated itself from communist groups, saying it “will never close ranks with an armed non-state actor that refuses to hold itself to account and carries a long and shameful history of atrocities against the people.”

“We call on Representative Remulla to immediately stop red-tagging the broad pink movement, particularly his own constituents in Cavite. It is such unbecoming conduct from an official who is supposed to respect the will of his people,” Akbayan said.

Cavite is the second most vote-rich province in the 2022 elections, with over 2.3 million registered voters.