Comelec to approve extension of voter registration until October 31 – lawmakers 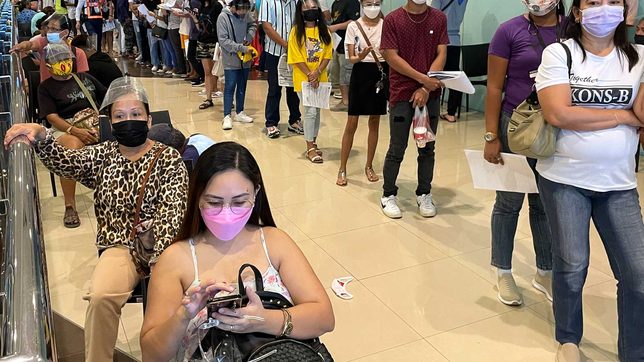 DEADLINE NEARS. With a few days left before the September 30 deadline, hundreds of qualified voters endure long lines to register for the 2022 national elections in one of the satellite voter registration areas of the Commission on Elections in Cebu City on September 27, 2021.

The Commission on Elections (Comelec) will approve an extension of voter registration until October 31, according to lawmakers who were in constant communication with the poll body.

Rep. Francisco Matugas II, sponsor of the Comelec’s proposed 2022 budget in the House, announced the same during plenary debates on Tuesday afternoon.

The statements came a day after Comelec spokesman James Jimenez made the most significant indication yet that the poll body is willing to move the registration deadline.

(In the meeting of the management committee, which will make the recommendation to the en banc, the sense is that they would likely grant a one-month extension.)

(The commissioners and officials sensed that we might have to give in to public clamor.)

Jimenez was referring to the meeting that Comelec Chairman Sheriff Abas and other members of the en banc conducted with field and regional officers earlier in the day to discuss the implications of a potential one-month extension of voter registration.

The en banc will meet on Wednesday to come up with a final decision on the matter.

Bills seeking to force the Comelec to extend voter registration by at least 30 days already hurdled both chambers of Congress on third and final reading. Once differences in their versions of the bill are reconciled and ratified by both houses, the proposed measure will be sent to President Rodrigo Duterte’s desk for his signature.

Senators on Friday, September 24, proved to the Comelec it was not fooling around when it threatened to use the proposed 2022 budget of the poll body as leverage in the negotiations, after the chamber’s finance panel deferred action on its proposed funds for next year.

The Comelec initially proposed a potential one-week extension of voter registration after the filing of certificates of candidacy on October 1 to 8, but lawmakers were not satisfied and insisted for a full one-month extension.

The Comelec has already registered over 61 million voters for the 2022 polls, way past its 59-million projection.

But lawmakers were not impressed, noting that the projected voting population by the Philippine Statistics Authority for the May 9, 2022 vote is over 73 million.

They also noted that months of voter registration were lost due to coronavirus-driven hard lockdowns.

In many parts of the Philippines, local Comelec offices were grappling with huge crowds of voter applicants, with just a few days left before the September 30 registration deadline.

In previous statements, the Comelec had said it cannot move the deadline due to operational concerns. Many of its administrative preparations are dependent on the final number of voters, such as the proper allocation of official ballots and other paraphernalia, among others. – Rappler.com