Facebook Twitter Copy URL
Copied
The controversy stems from the distribution of white envelopes containing P500 bills to participants of a campaign rally for Marcos Jr. in Nueva Ecija

MANILA, Philippines – The Commission on Elections (Comelec), which has the power to initiate a probe for election offenses, will wait for someone to write to the poll body about the alleged vote-buying incident at a campaign sortie for presidential aspirant Ferdinand Marcos Jr. in Nueva Ecija, before making a move.

“We will wait for the proper complaint to be filed so that we can take action thereon,” Comelec Commissioner George Garcia told reporters on Viber on Wednesday, March 16.

Garcia raised the issue during Wednesday’s session of the seven-member Comelec en banc, which is the policy-making body of the commission.

After the candidates left the vicinity, rally participants lined up and were handed envelopes containing cash. 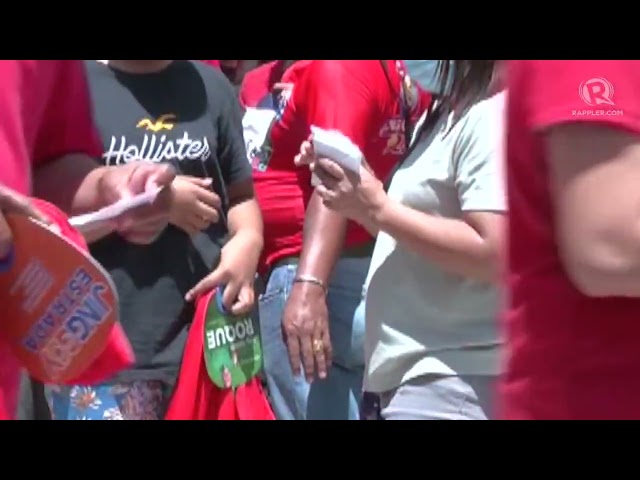 The Marcos campaign and Partido Federal ng Pilipinas denied knowing anything about the distribution of envelopes. The dictator’s son, meanwhile, seemed to be aware of a “payout” distribution during his speech.

Under the Omnibus Election Code, vote-buying is an election offense, which is punishable by imprisonment of one to six years, disqualification from public office, and deprivation of right of suffrage.

The Comelec’s reaction to the alleged vote-buying incident on Wednesday is consistent with how it addresses issues of vote-buying: telling the public to file a formal complaint with the poll body.

The 1993 Comelec Rules of Procedure states that “initiation of complaint for election offenses may be done motu proprio by the Commission.”

Incident reports can be submitted to sumbongko@votesafe.ph, which is Comelec’s dedicated email for potential election offenses.

Comelec spokesman James Jimenez has advised the public who will report election violations such as vote-buying to “pursue the case to the end.”

How to report 2022 election violations He also previously asked the public to manage expectations, as all reports of election violations will undergo due process. – Rappler.com