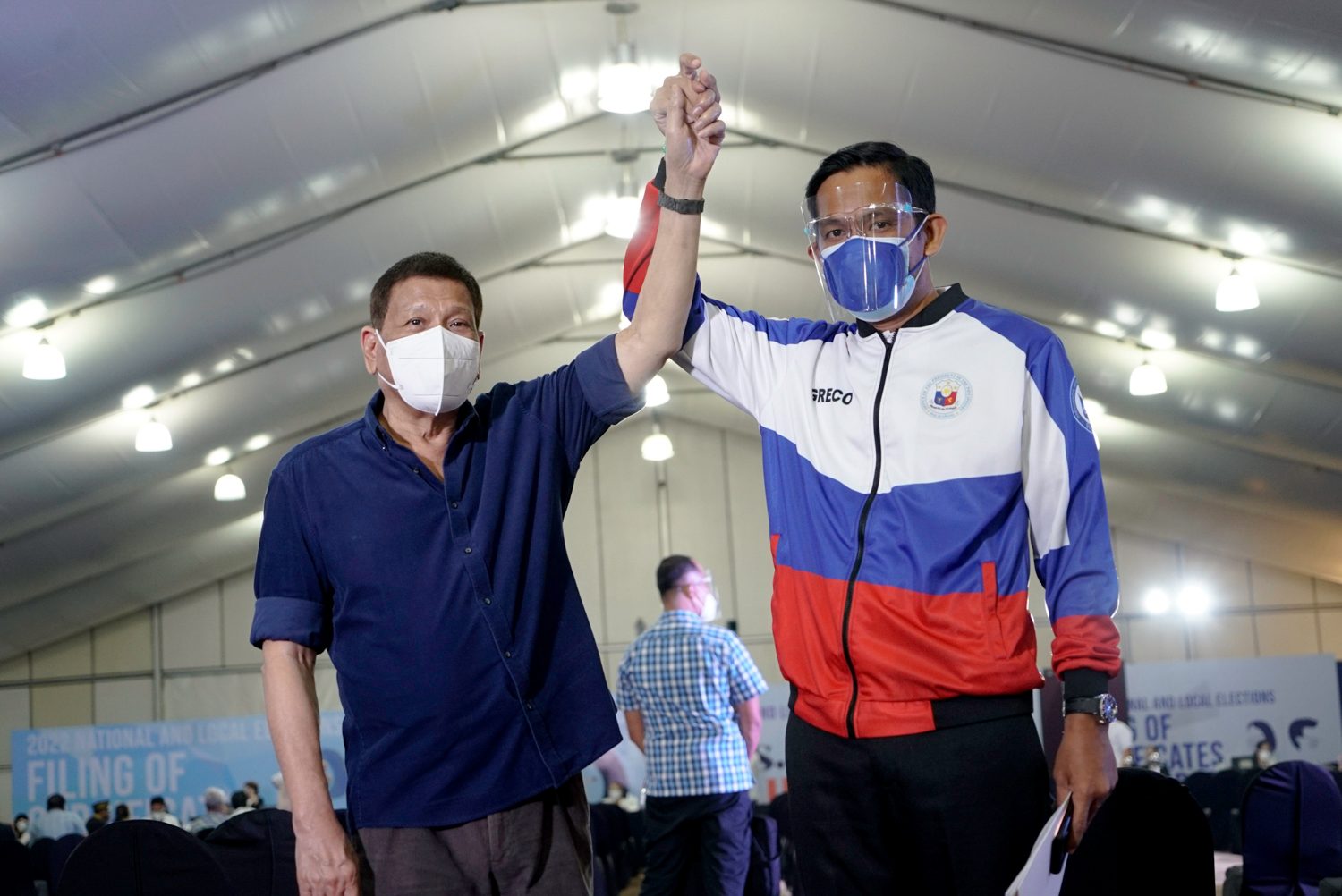 President Rodrigo Roa Duterte raises the hand of Presidential Anti-Corruption Commission (PACC) Chairman Greco Belgica, who is deemed resigned from his post, after the latter filed his certificate of candidacy for senator before the Commission on Elections (Comelec) at the Sofitel Philippine Plaza Hotel in Pasay City on October 8, 2021. Malacañang photo

Facebook Twitter Copy URL
Copied
(UPDATE 1) Win or lose, all candidates and treasurers of political parties are required under the Omnibus Election Code to submit 'full, true, and itemized' Statement of Contributions and Expenditures within 30 days after election day

From January 2018 and until last October, when he filed for candidacy, Belgica had served as a commissioner, and later as chairman, of the Presidential Anti-Corruption Commission (PACC), an agency under the Office of the President.

Duterte has been generous to the Belgicas. He had also appointed Greco’s father, Grepco ‘Butch’ Belgica, as Presidential Adviser on Religious Affairs, and Greco’s brother, Jeremiah, as secretary and director general of the Anti-Red Tape Authority since July 2019.

Recently, on the April 9, 2022, episode of The President’s Chatroom – a Malacanang-produced program that features Duterte as interviewer – the President raised paeans of praise to his candidate from the PDDS party or the Pederalismo ng Dugong Dakilang Samahan.

Duterte said more: “You are a crusader, ikaw ‘yung pinakabata at ikaw ‘yung pinaka may alam sa gobyerno…. And you have filed so many cases against people in government who were into graft and corruption.”

(I was one of those who pushed you to run for Senate because I saw you as a crusader. You insisted on what’s right, and for us to talk about what’s right during meetings. You’re a crusader and you’re one of the youngest and knowledgeable about the government.)

Without a doubt, Duterte favors Belgica. But then he clearly had no idea that, by election rules, his candidate is no paragon of virtue.

While the Constitution allows Belgica and all Filipino citizens of age to vote and be voted, Belgica may not be able to assume his post as senator, in the remote possibility that he wins on May 9, despite his poor ranking in the surveys.

This is because Belgica is one of the 545 politicians and candidates past and present that the Commission on Elections (Comelec) has listed “for perpetual disqualification” from holding public office.

Why? Like all the others on Comelec’s DQ list, Belgica had failed to file his Statement of Contributions and Expenditures or SOCE, by the lawful deadline of 30 days after election day.

Belgica ran for senator but lost in 2013 (as a candidate of the Democratic Party of the Philippines) and in 2016 (as an independent candidate). He was elected, however, as councilor of the 6th district of Manila from 2004 to 2007,
a post that his father had also occupied earlier.

A few more memorable names on the DQ list are:

Ismael ‘Chuck’ Mathay III, son of the late Ismael “Mel” Mathay Jr. (long-time mayor of Quezon City and Metro Manila Development Authority chairman from 1992). Chuck Mathay is also the father of Ismael “Macky” Mathay IV, who is running for Sangguniang Panlungsod member in San Juan City on May 9, as a candidate of the PDP-Laban party.

Mario Pacursa Marcos, a volunteer for the UNITEAM slate, who is described online as “President Director of PT Philippines Antiviral Indonesia who is recently collaborating with Gadjah Mada University (UGM) to develop antiviral medication for COVID-19.” Marcos ran but lost his bid to serve as congressman for the 2nd district of Albay province in 2019.

Georgina Dait Lumauig, daughter of the late Ifugao province governor Gualberto Lumauig, ran but lost her bid to be vice governor of Ifugao in the 2013 and 2016 elections, as a candidate of the United Nationalist Alliance.

Regina Aquino Aspiras, granddaughter of the late Tourism Minister Jose Aspiras, who ran but lost her bid to be a Sangguniang Panlungsod member in the 6th District of Manila in 2010, as a candidate of the Nationalist People’s Coalition.

Danton Remoto, writer and university professor, who ran as lead nominee of the party-list group Ang Ladlad in 2010, and as Ang Ladlad candidate for senator in 2013.

All candidates are required to file their SOCEs, according to campaign finance rules defined in the Constitution, election law, and jurisprudence.

Win or lose, must file

Campaign finance, according to Comelec, “refers to all funds raised in order to promote candidates, political parties, or policies in elections, referendums, initiatives, party activities, and party organizations.”

The Constitution, in Article II, Section 26, states this policy:

“The State shall guarantee equal access to opportunities for public service, and prohibit political dynasties as may be defined by law.”

Comelec said this policy promotes “equal access to opportunities…a level playing field for all candidates, regardless of their financial capacity.”

A Supreme Court ruling (Chavez v. Comelec), exhorted the poll body to perform its “duty to enact and implement rules to safeguard this interest.”

Win or lose, all candidates and treasurers of political parties are required under the Omnibus Election Code (Batas Pambansa B881) to submit “full, true, and itemized” SOCEs in relation to their electoral campaigns, within 30 days after election day.

The Code has been amended by Republic Act 7166 (Synchronized National and Local Elections for Electoral Reforms), which decriminalized non-filing, but also spelled out clear procedures for filing SOCEs. Section 14 states: “No person elected to any public office shall enter upon the duties of his office until he has filed the (SOCE)”, a prohibition that applies also to the political party that nominated the winning candidate.

A first instance of failure to file is an administrative offense that carries a penalty of P1,000 to P30,000, on the discretion of the Comelec. Failure to pay the fine will allow the poll body to enforce its ruling “by a writ of execution…against the properties of the offender.”

A second instance of failure to file carries a bigger penalty of P2,000 to P60,000, and “in addition, the offender shall be subject to perpetual disqualification to hold public office.”

Over the last four national and local elections – 2010, 2013, 2016, and 2019 – the Comelec had started to take major steps to enforce campaign finance rules. What used to be an ad hoc Campaign Finance Unit (CFU) has become a better-staffed but also overworked Campaign Finance Office (CFO).

The number of non-filers who had been flagged continued to rise across election episodes. The big task at hand is whether and when the CFO cases for perpetual disqualification could be formalized by en banc resolutions of the seven Comelec commissioners that have not been issued yet.

In 2013, the Comelec CFO team reported that 424 candidates then did not file or filed incomplete SOCEs, including 20 who ran and won as members of Congress, four governors, and 26 mayors. The 424 who were on SOCE penalty row included 169 winning candidates from the Liberal Party led by then-president Benigno Aquino III, and 44 from the National Unity Party (NUP) that was allied with the LP.

In 2016, at least 95 non-filers of SOCE ran again as candidates but should have been perpetually disqualified from holding public office. The 95 were among a total of 873 candidates for national and local positions who had been flagged by the Comelec as non- filers from the 2007 to the 2013 elections.

In Comelec Resolution 9991, the Omnibus Rules on Campaign Finance issued on October 2, 2015, the poll body said that on its own, or motu propio, the CFO “may file petitions to disqualify” a candidate, including for failure to submit his or her SOCE “in relation to at least two elections.”

Then Comelec Commissioner Christian Robert Lim, head of Comelec’s CFO, said, however, that the delinquents may still turn to “due process” as their final recourse and contest or appeal the CFO’s decision.

As a procedure, notices about their non-filing of SOCEs for two elections in a row are sent to the candidates so that they may explain or appeal the Comelec’s decision to perpetually disqualify them from holding public office.

Given its enormous work backlog, however, the Comelec en banc does not seem inclined or ready to formalize the DQ cases of the 545 candidates that the CFO has submitted. At the start of 2022, and amid the changing of guards in the poll body, about 4,000 candidates in the May 2018 barangay and Sangguniang Kabataan elections did not file their SOCEs. Review and decision of their cases has not been finished.

Commissioner George Erwin Garcia affirms that the en banc has yet to formalize the DQ status of the 545 candidates via resolution. Should they win on May 9, he says, individual petitions will have to be filed to actually disqualify those on the list from assuming their positions.

Chances are, the CFO’s DQ list is at best a reminder to voters that some candidates may not be qualified at all for public office because they are non-filers of SOCE.

In a Facebook post on Monday, May 9, Baguio City mayoral candidate Mauricio Domogan called the release of the Comelec list by Right to Know, Right Now! Coalition as “politically motivated.”

“In my entire political career of being a candidate, never have I not filed my SOCE. It is an outright lie to smear my good reputation and mislead the public,” he said.