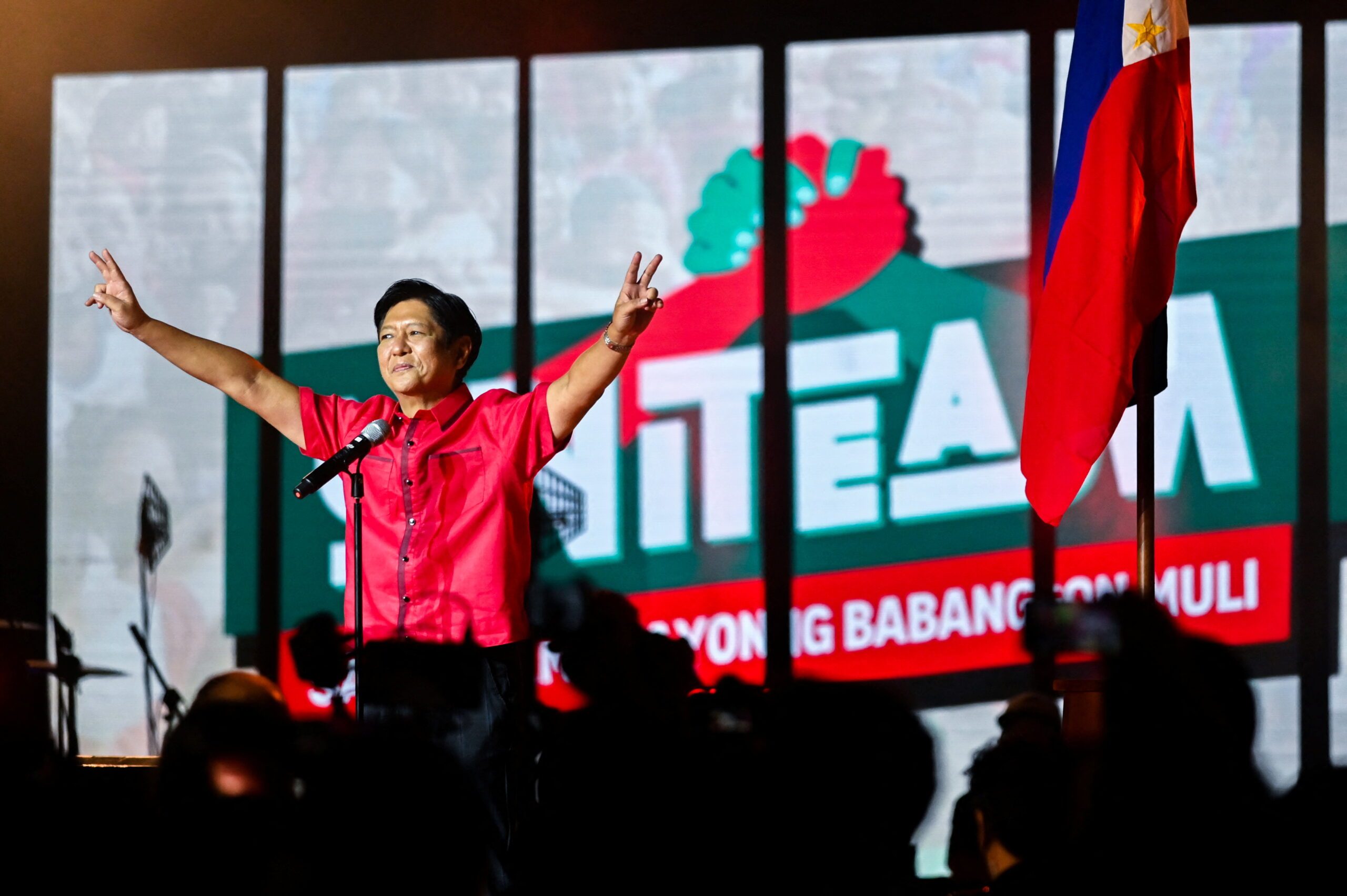 DICTATOR'S SON. Presidential candidate Ferdinand Marcos Jr., son of the late dictator Ferdinand Marcos, delivers his speech during the first day of the campaign period for the 2022 elections at the Philippine Arena in Bulacan on February 8, 2022.

Facebook Twitter Copy URL
Copied
Still in second place is Vice President Leni Robredo, but her spokesman says the survey was 'too early to capture the impact' of Robredo's performance in media interviews and 'massive rallies' for her 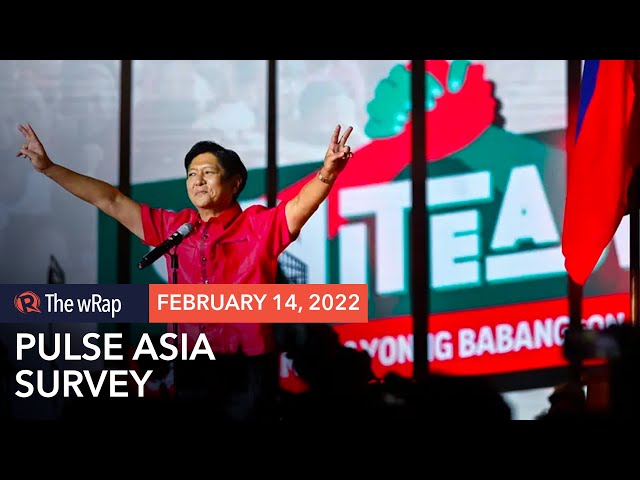 MANILA, Philippines – Dictator’s son Ferdinand Marcos Jr. continued to pull away from his rivals in the latest Pulse Asia survey on the 2022 elections released on Sunday, February 13, with 60% of respondents nationwide choosing him as their preferred presidential bet.

The survey, conducted from January 19 to 24, showed the son and namesake of the late dictator Ferdinand Marcos sustaining his lead, gaining seven percentage points from Pulse Asia’s December 2021 survey, where he was the top choice for 53% of respondents.

Still in second place was Vice President Leni Robredo, who was the favored candidate of 16% of respondents. Compared to Pulse Asia’s December survey, backing for Robredo fell by four percentage points.

The conduct of the survey coincided with GMA Network’s The Jessica Soho Presidential Interviews, which aired on January 22, or in the last few days of the polling period. Of the six invited candidates, only Marcos refused to attend, snubbing the event because Soho was supposedly “biased against the Marcoses” – a claim GMA refuted. (READ: Biased? GMA tells Marcos camp Jessica Soho’s questions ‘tough’ like the presidency)

In a statement on Sunday, Robredo’s spokesperson Barry Gutierrez said the survey was “too early to capture the impact of the game-changing interviews with GMA, DZRH, and other media outfits.”

“VP Leni’s stellar performance in those interviews, added to the massive rallies that have come out for her during this first week of the official campaign, give us confidence that she has the clear momentum. We have no doubt this will be reflected in the coming surveys, and of course, on election day,” Gutierrez said.

The survey also took place after the Commission on Elections 2nd Division unanimously dismissed a petition to cancel Marcos’ certificate of candidacy on January 17. Shortly before the survey period, the poll body also rejected a petition filed by the PDP-Laban faction led by Energy Secretary Alfonso Cusi to reopen the filing of COCs and postpone the printing of ballots.

Manila Mayor Isko Moreno and Senator Manny Pacquiao were tied at third place, each keeping 8% of voter preference. Senator Panfilo Lacson remained in fourth place at 4%, after seeing a drop of two percentage points from his 6% preference among respondents in December.

[Newsstand] The deciding factors in the 2022 elections The former senator’s biggest gain was in Balance Luzon where he was the top pick of 61% of respondents in January, climbing 10 percentage points in the area from December. Far behind in second was Robredo, who was the pick of 19% of respondents.

Preference for Marcos in the Visayas (53%) and Mindanao (66%) also grew, with Robredo trailing in second for the Visayas (19%) and Pacquiao in Mindanao (13%).

After Marcos, 16% of respondents in Class D would go for Robredo, while 20% in Class E would pick Pacquiao.

Pulse Asia president Ronnie Holmes told Rappler on Sunday that for the firm’s January survey, no one among the randomly selected respondents were from Class AB, which make up roughly 1% of adult Filipinos. Holmes said Pulse Asia followed multistage probability sampling.

If the voter’s first choice for president does not push through with his or her candidacy for whatever reason, Moreno would still be the main beneficiary as 24% nationwide said they would instead vote for him.

Meanwhile, 2 out of 10 registered voters, or 20%, would not vote for any other candidate if their preferred candidate withdraws or does not pursue his or her candidacy.

The May 9 elections are less than 90 days away. – Rappler.com