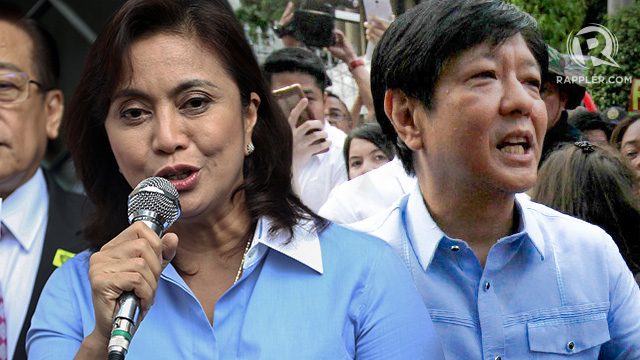 Facebook Twitter Copy URL
Copied
(2nd UPDATE) It's shaping up to be a Marcos-Robredo fight, according to a December poll conducted by Pulse Asia

MANILA, Philippines – The son and namesake of the late dictator Ferdinand Marcos has outpaced other rivals for the presidency in a Pulse Asia survey conducted two months before the official start of the 2022 campaign period.

In a survey conducted from December 6 to 11, Ferdinand Marcos Jr. was the top choice for president of 53% of respondents. Far behind in second place was Vice President Leni Robredo, the top pick of 20% of respondents.

This is the first time in a Pulse Asia survey that a presidential aspirant got a “majority vote” equivalent in survey ratings, Pulse Asia executive director Ana Tabunda told Rappler on Wednesday, December 22, the day the firm released the results.

“Even if you include 1992 and 1998 – Erap (Joseph Estrada) didn’t get majority vote,” she added. Tabunda, however, cannot say the same is true for Social Weather Stations surveys.

Tied for third place were Manila Mayor Isko Moreno and Senator Manny Pacquiao, with 8% each. In fourth place was Senator Panfilo Lacson with 6%.

Marcos, a former senator who lost the vice presidency in 2016 to Robredo, was dominant in all major regions. In Metro Manila, he is the pick of six out of 10 respondents with a preferential rating of 61%. Far behind him was Moreno, with 17%, followed closely by Robredo, with 14%.

Marcos, known to many as BBM (short for Bongbong Marcos), overwhelmingly leads in Mindanao, bailiwick of President Rodrigo Duterte and his daughter, Marcos’ running mate Davao City Mayor Sara Duterte. He is the top presidential pick of 64% of Mindanaoan respondents. The second top pick is Pacquiao, who hails from General Santos City, but who only got 14% in the southern region.

In Balance of Luzon and Visayas, Marcos was also the clear top choice, scoring ratings of 51% and 42%, respectively. Robredo is the second-placer in those regions, garnering 24% and 25%, respectively. The Vice President comes from Bicol.

Rich and poor go for Marcos

Most of the country’s wealthy and middle class would vote Marcos for president as of the time of the survey.

More than half of Class ABC, or 53%, said Marcos was their favorite for Malacañang. Robredo was their second choice, getting 24%.

But Marcos was also favored by the poorest Filipinos. More than half, or 54% of Class D said they would go for him. Among the most impoverished, Class E, 49% said Marcos was their pick.

Pulse Asia conducted its survey weeks after President Duterte called Marcos a “weak leader” and implied he used cocaine. Marcos currently faces six petitions attempting to block his presidential bid, either through disqualification or cancellation of his certificate of candidacy.

Most of the petitions filed cited Marcos’ tax conviction in the 1990s as basis for his disqualification under Philippine laws.

“We are looking at these very handsome figures that were released today as added motivation and inspiration,” Marcos’ spokesperson Vic Rodriguez said. “But it is clear for BBM that we have not won anything yet, because the election is on May 9, 2022.”

Though Marcos leads by a lot, the December numbers are also good news for Robredo.

Her numbers are far better than they were in Pulse Asia’s September survey where she got only 8%. Across regions and economic classes, her numbers ranged from 8% to 12%. This month, her range shot up to 10% to 25%.

Robredo’s spokesperson Barry Gutierrez said the increase is a “definitive affirmation of the energy and momentum of the people’s campaign that emerged” after she declared her candidacy, adding that 2022 is “clearly a Robredo versus Marcos contest.”

“We are confident that in the next four months, VP Leni’s consistent, hands-on leadership and the enthusiastic efforts of our volunteers, will continue to broaden and increase her support,” he said.

The new figures were undoubtedly affected by the decision of certain personalities not to run for president. Back in September, Pulse Asia had listed Mayor Sara Duterte, Senator Grace Poe, and Taguig-Pateros Representative Alan Peter Cayetano as possible presidential aspirants. – Rappler.com