Facebook Twitter Copy URL
Copied
'What went right are some things that can move forward beyond elections: passion, civic mindedness, the awareness of revisionism, the awareness against the disinformation, and what we can do about it,' says Edwin Lacierda

MANILA, Philippines – Former presidential spokesperson Edwin Lacierda on Tuesday, May 10, said time was the enemy in the campaign of Vice President Leni Robredo for the 2022 national elections.

In a Rappler panel, Lacierda highlighted the late decision of Robredo to run as perhaps one of the issues that brought forward challenges to the campaign. While in 2016 she also signified late her candidacy for the vice presidential race, there was a “big difference” between the two situations.

“In 2015, we were the administration party, we had all the resources, the political machinery,” the former spokesperson of then-president Benigno Aquino III said.

“And remember, she was just the vice presidential candidate so she was riding on the coattails of Mar Roxas, the Liberal Party, and the administration,” Lacierda added. 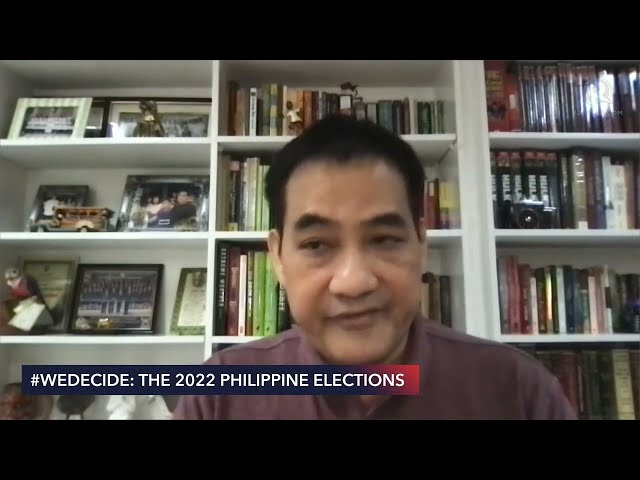 Robredo, the opposition leader under Duterte, ran and won in the vice presidential race in 2016 against the dictator’s son Ferdinand “Bongbong” Marcos Jr. He filed an electoral protest but was unanimously dismissed by the Supreme Court sitting as the Presidential Electoral Tribunal in February 2021.

For the 2022 elections, Robredo announced that she would gun for the presidency as an independent candidate on October 7, 2021 – a day before the October 8 deadline of filing of certificate of candidacies with the Commission on Elections. Her decision came after a long discernment process for Robredo, who ultimately believed that only a united opposition could stop whoever would be the candidate of President Rodrigo Duterte.

She, however, is projected to be defeated by presumptive president and the dictator’s son by a huge margin. Partial and unofficial results as of Tuesday, May 10 at 4:31 pm show Marcos leading with 30,988,979 votes against Robredo’s 14,771,802 with 97.89% precincts reporting. Marcos Jr.’s presumptive win comes 36 years after the dictator Ferdinand Marcos Sr. and his family, was ousted from Malacañang in 1986. His father’s rule, especially under Martial Law, plunged the Philippines into its darkest moments with thousands arrested, tortured, killed, and disappeared. The elder Marcos’ family and his cronies also enriched themselves using taxpayers’ money.

These facts proved not to be a hindrance to Marcos Jr.’s presidential ambition, mostly thanks to years of the family’s efforts to sanitize their image by a massive disinformation network on social media.

According to Lacierda, Robredo’s numbers could have been better if the elections were held later than May 9, 2022.

“Starting late and without the machinery and political backing, it’s quite difficult,” Lacierda said.

The highlight and what set apart the Robredo’s run was the massive volunteer-driven campaign and the movement it inspired.

“It’s the first time that the [level of] passion of volunteers were phenomenal and they filled the vacuum [left by] the machinery and you can see that the surge was there…. Unfortunately it happened sometime in February,” he said.

The campaign for Robredo and vice presidential candidate Senator Kiko Pangilinan was heavily fueled by supporters and volunteers. Her huge campaign events across the country were mostly organized by local volunteer groups, in addition to the numerous house-to-house initiatives.

“What went right are some things that can move forward beyond elections: passion, civic mindedness, the awareness of revisionism, the awareness against the disinformation, and what we can do about it,” Lacierda said. – Rappler.com