Vice President Leni Robredo addressed the nation anew to offer additional recommendations on the country's COVID-19 response, and to send a message of unity amid this crisis. The video address, which was aired Monday, September 28, laid out five suggestions, which included the following: (1) Setting clear, measurable, and time-based goals for suppressing COVID-19 in the country; (2) Providing additional support to Local Government Units; (3) More comprehensive assistance for small businesses; (4) Helping the unemployed find jobs; and (5) Planning for the massive deployment of COVID-19 vaccine once available. In her message, VP Leni also expressed her office's willingness to collaborate in various COVID-19 response efforts, as she once again called for strategic and organized action in order to address the needs during this crisis. (Photo by OVP)

Facebook Twitter Copy URL
Copied
(7th UPDATE) This concludes more than 4 years of litigation of the Supreme Court, marked by controversial attempts to make the lead justices inhibit from the case 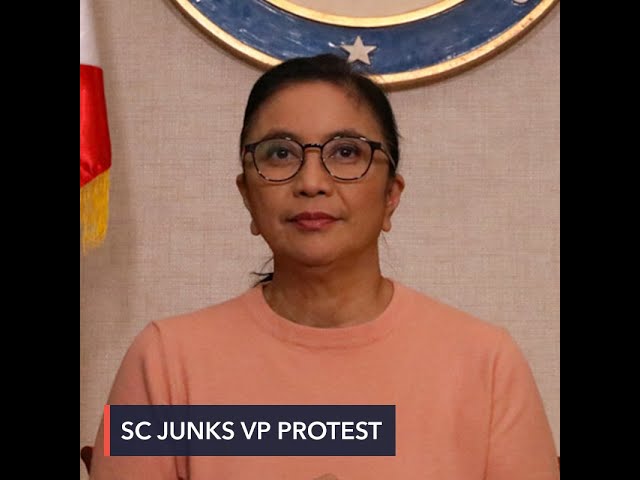 SC Spokesperson Brian Keith Hosaka confirmed this and said on Tuesday, February 16, that “7 members fully concurred with the dismissal and 8 concurred only with the result.”

Rappler’s sources, who are privy to the information, earlier said the vote was unanimous during the en banc session on Tuesday, February 16.

According to Rappler’s source, the PET dismissed the case because Marcos did not sufficiently justify an annulment of elections in 3 Mindanao provinces.

The SC PIO issued this after the Marcos camp claimed that the entire case had not been decided yet. (READ: Despite categorical ruling, Marcos insists SC hasn’t junked entire VP protest)

This concludes more than 4 years of litigation of the Supreme Court, marked by controversial attempts to make the lead justices inhibit from the case. The case lead has changed, from Associate Justice Benjamin Caguioa to Associate Justice Marvic Leonen.

Leonen, whom Marcos had also moved to inhibit, remained case lead until the dismissal on Tuesday. He is facing an impeachment complaint at the House of Representatives, endorsed by Marcos’ cousin, Ilocos Norte 2nd District Representative Angelo Marcos Barba.

In October 2019, PET finished the pilot recount of Marcos’ 3 chosen provinces, which resulted in Robredo widening her lead even more by 15,093 additional votes.

When the PET finished the recount, Caguioa and retired senior justice Antonio Carpio already voted to dismiss the protest, citing Rule 65 of the PET rules. It says if there was no substantial recovery, the protest may be dismissed.

Caguioa and Carpio lost the vote, allowing the PET to proceed with a new member-in-charge, which was Leonen, who got the case though a raffle.

Since October 2019, the PET had deliberated on Marcos’ 3rd cause of action, which is to void votes in Lanao del Sur, Basilan, and Maguindanao, alleging fraud.

The Comelec told the PET to use this power cautiously as it would risk disenfranchising voters.

Solicitor General Jose Calida, who also moved to inhibit Leonen in a motion very similar to Marcos’ and which he filed on the same day, told the PET that if they were to annul the votes in those provinces, the winner shall be declared from the remaining valid votes. A result of this suggestion would be a Marcos win. – Rappler.com