Isko steps into Marcos territory, offers himself as ‘alternative’ to dictator’s son 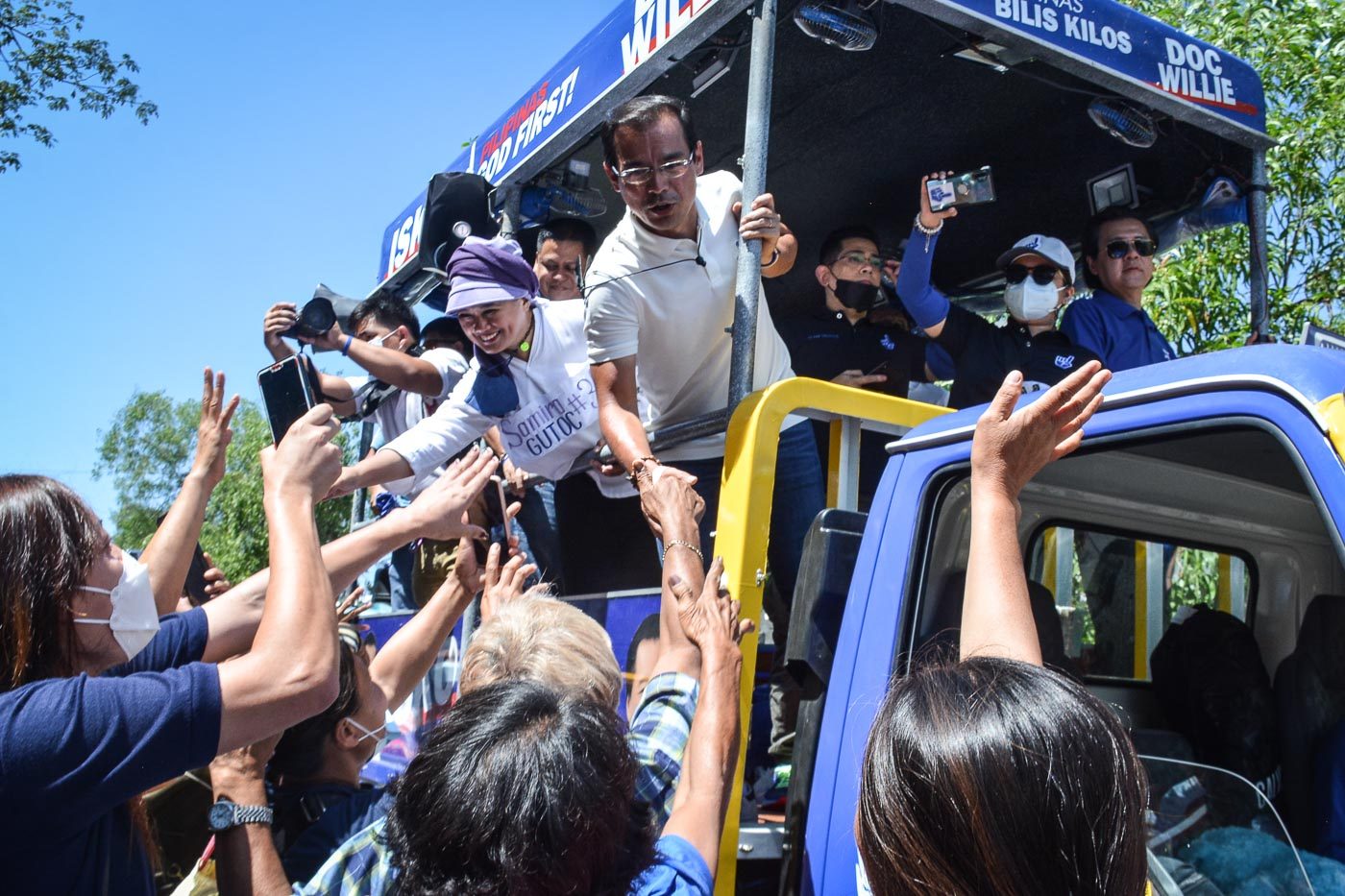 LA UNION, Philippines – It was a mixed bag for Isko Moreno in his first step into Ilocos on Thursday, February 17.

Near-empty streets blighted his motorcade in La Union but local partners were able to gather a large crowd for his town hall meeting there.

Their day in the province began with a courtesy call on Governor Francisco Emmanuel Ortega III in the capitol building. Moreno’s arrival was heralded by screams of women in the building’s ground floor, heard by reporters waiting on the second floor.

Ortega stayed inside his office for Moreno’s arrival. Media were also told they could not be physically present at the presidential bet’s meeting with the governor. Staff cited social distancing rules and just sent reporters photos of the meeting between the two officials.

The governor, a member of President Rodrigo Duterte’s party PDP-Laban, also did not address the media or make any statement, even after his meeting with the Aksyon Demokratiko candidates.

Moreno was inside Ortega’s office for around an hour. His running mate Willie Ong said the mayor talked to Ortega about his plan to crack down on the smuggling of agricultural products, an effort to help La Union farmers whose products may be much more expensive than those from abroad.

From the provincial capitol, Moreno and his team went around nearby streets on a flat-bed truck blaring his “Posible” campaign song. But the streets were not as filled with screaming women, pro-Isko signs, and fists in the air as during motorcades in Metro Manila, Laguna, and Cavite.

It didn’t help that the caravan took place around lunchtime because Moreno was behind schedule after an early morning event in Manila.

Back at the capitol, Moreno acknowledged that getting support from La Union and other Northern Luzon provinces would be an uphill battle.

But he wasn’t about to give up just yet.

(No matter how tough beef shank is, if you keep heating it, it will eventually get soft.)

Asked why Ilocanos should vote for him instead of Ferdinand Marcos Jr. who has Ilocano blood running through his veins, Moreno said he is a viable “alternative” candidate.

(They already gave the reds a chance, they gave the Yellows a chance, if they are already tired of them, they can choose someone different.)

Moreno said he would be happy to just get even a few more votes from La Union, which has around 539,000 registered voters.

Yet before the day was over, Moreno found a packed audience waiting for him in a covered court in South Ilocandia College of Arts and Technology in Aringay town.

Moreno’s team pegged the number of attendees at 3,000 but Rappler could not independently verify this. What was apparent was Moreno’s rapport with the audience who welcomed him onstage with cheers and applause, even as many furiously fanned themselves against the heat.

When a woman screamed, “I love you!” Moreno shouted back, “I love you too!” eliciting more excited screams.

He told them of his childhood experience of eating pagpag or leftover food foraged from the trash.

“Gusto ‘nyo ba na maiba naman?” he asked. (Do you want to try something different?)

The audience cheered loudly when Moreno promised he would make sure Filipino fishermen would be protected from foreigners and that his administration would buy Filipino farmers’ produce as food aid.

On the La Union streets Moreno’s motorcade passed through, there were residents who said they were voting for him.

One woman, asked by Rappler on camera why her first pick is Moreno, answered, “I-try natin, ma’am!” (Let’s try him first!)

Another woman said most of her friends and family were pro-Marcos but she was voting for Moreno. One woman said she finds the Manila mayor “guwapo” (handsome).

But a man attending to a bakery said he was Marcos all the way. Asked why, he said, “Ilocano (Because he’s Ilocano).”

Moreno will spend his second day in Ilocos in Pangasinan, the country’s third most vote-rich province. – Rappler.com