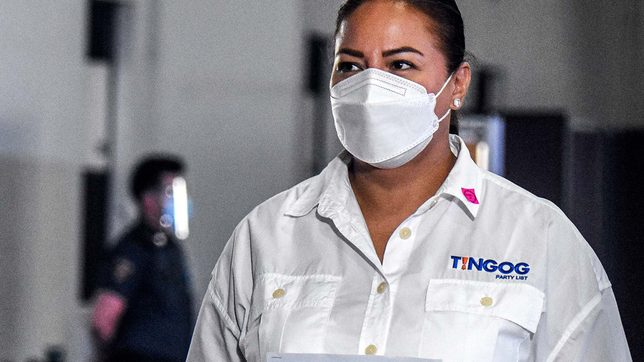 TV personality Karla Estrada files the certificate of nomination and acceptance for Tingog party-list for the 2022 national elections, at the Harbour Garden Tent of Sofitel hotel in Psay City on October 8, 2021.

Facebook Twitter Copy URL
Copied
On the final day of the filing of certificates of candidacy for the 2022 elections, KathNiel's fanbase faces a huge test of loyalty

Most days, fans of celebrity love team Kathryn Bernardo and Daniel Padilla – better known as KathNiel – flood Twitter with admiration and praise for the duo. They’re also known to be fiercely protective of their idols and are quick to pounce on critics, as most online fandoms tend to do.

However, on Friday, October 8, the final day of the filing of certificates of candidacy for the 2022 elections, KathNiel’s fanbase faced a huge test of loyalty. It turned out actress Karla Estrada, Daniel’s mother, had filed her certificate as a nominee of party-list group Tingog Sinirangan – whose current representative, Yedda Romualdez, had voted to reject the renewal of media giant ABS-CBN’s franchise.

KathNiel are talents of ABS-CBN, and the franchise battle was one of the most significant attacks on press freedom the country had seen in recent memory.

Netizens were quick to point out the irony of Estrada’s move, including those who were avowed fans of her son. They employed the hashtag #WithdrawKarlaEstrada, which soon started to trend on local Twitter, and continues to be at the Top 2 spot as of writing.

Some KathNiel fans made it a point to show that their love for the couple would not get in the way of their political beliefs. Some dared to say they would stop being fans altogether, while others made a plea to Bernardo and Padilla not to support Estrada.

Whether KathNiel or Estrada would heed to the pressures of the online crowd remains to be seen.

How about you? How would you feel if a celebrity you adored was involved in an issue that countered your beliefs? – Rappler.com