OUTCRY. Various progressive youth organizations gather outside the Senate on November 24, 2020, to protest against red-tagging.

Facebook Twitter Copy URL
Copied
Commission on Elections spokesperson James Jimenez however asserts that the job of the poll body is to run elections, ‘not to police the behavior of people’

A poll watchdog insisted that the police and military are violating election laws by subjecting certain individuals and groups to red-tagging.

Speaking to Rappler, Kontra Daya said the Commission on Elections (Comelec) should be alarmed by these red-tagging efforts by state forces.

“Not only does this constitute graft, the actions of the Armed Forces of the Philippines and the Philippine National Police clearly violate election rules as they should be inherently nonpartisan. After all, their job is to ensure the sanctity of the ballot, not impunity of the bullet,” Arao said in a text message on Monday, May 10.

The Omnibus Election Code considers an offense the intervention of public officers and employees, including soldiers and policemen, in “any election campaign or… in any partisan political activity, except to vote or to preserve public order.”

Back in April, the watchdog said the Comelec should make its position known on the red-tagging efforts by government forces.

“I hope Comelec will take a firm stand against the red-tagging of certain candidates and party-list groups, because we are seeing the intensification of red-tagging, as 2022 rolls around,” Kontra Daya convenor Danilo Arao had said on April 23.

The Comelec said it is not dismissing Kontra Daya’s “vague” call outright, but argued that it falls outside the ambit of what the poll body is supposed to do.

“The Comelec is to run the elections, it’s not to police the behavior of people. There are other mechanisms for that. I’d be very happy to talk to Kontra Daya to find out exactly what they mean about that, what they exactly had in mind,” Jimenez said on Rappler Talk.

“I don’t see how this would fall within the authorities and powers already exercised by the Comelec,” he added. 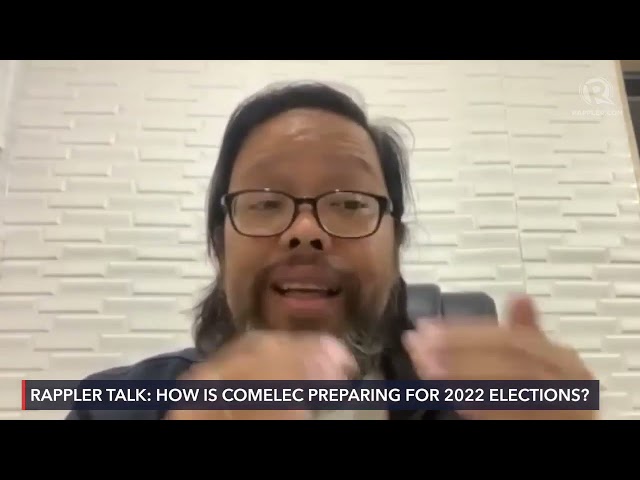 The National Task Force to End Local Communist Armed Conflict (NTF-ECLAC) has called for the disqualification of left-leaning groups accused of having ties to the communist movement.

In March, party-list groups Kabataan and Gabriela filed manifestations of intent to participate in the 2022 party-list elections, in defiance of the military’s efforts to disqualify them through red-tagging. Asked about what the Comelec thinks about the government’s bid to have such party-list groups disqualified, Jimenez said efforts to bar an individual or group from participating in elections are no longer new.

Jimenez added he is only familiar with one recent disqualification case against a left-leaning group.

“Okay, you can argue that this is different because this is the government bringing down the full weight of government against some people. Fine. But is [Comelec] really the forum for fairness?” Jimenez asked.

“To take the government to task for wanting some people out of the game, that would be beyond the scope of what Comelec is authorized to do,” Jimenez added.

In December 2020, National Security Adviser Hermogenes Esperon Jr. said left-leaning groups should be barred from participating in the elections because they “do not believe in condemning the New People’s Army for its violent actions.”

Under Republic Act No. 7941 or the Party-List System Act, Comelec may cancel the registration of any organization if it advocates violence or unlawful means to achieve its goals.

Groups under the Makabayan bloc have been the subject of disqualification cases since the time of former president Gloria Macapagal Arroyo due to their supposed communist ties, but none of the cases have prospered. – Rappler.com