Manny Pacquiao to run for president in 2022 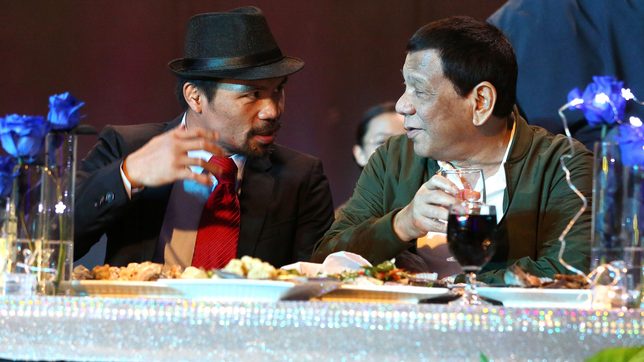 Senator Manny Pacquiao accepted the nomination of his party PDP-Laban to seek the presidency in 2022, joining a hotly contested race to succeed his erstwhile ally President Rodrigo Duterte.

“We are ready to rise to the challenge of leadership,” Pacquiao said in his acceptance speech on Sunday, September 19.

The faction led by Pacquiao held its national assembly on Sunday, where party members nominated him as the standard-bearer. Members of their PDP-Laban faction also agreed to give Pacquiao the authority to choose his running mate, as well as his Senate slate.

The boxing champ-turned-politician said said he will be running on an anti-corruption platform.

(To those who continue to serve in government to exploit and steal from the country’s coffers, you will find yourselves in jail soon.)

The senator had admitted to meeting with other potential presidential bets Vice President Leni Robredo and Manila Mayor Isko Moreno, but it appears that the talks have failed. Pacquiao is the second politician to officially confirm his intention to run for the presidency. His colleague at the Senate, Senator Panfilo Lacson, was the first to launch his campaign.

Another seeming contender is Senator Bong Go, who was nominated by the other faction of PDP-Laban as its presidential candidate. Duterte accepted the nomination as vice presidential bet, but Go said he does not want to run.

The warring factions of PDP-Laban would still have to wait for the decision of the Commission on Elections as to which camp will be recognized for the 2022 elections.