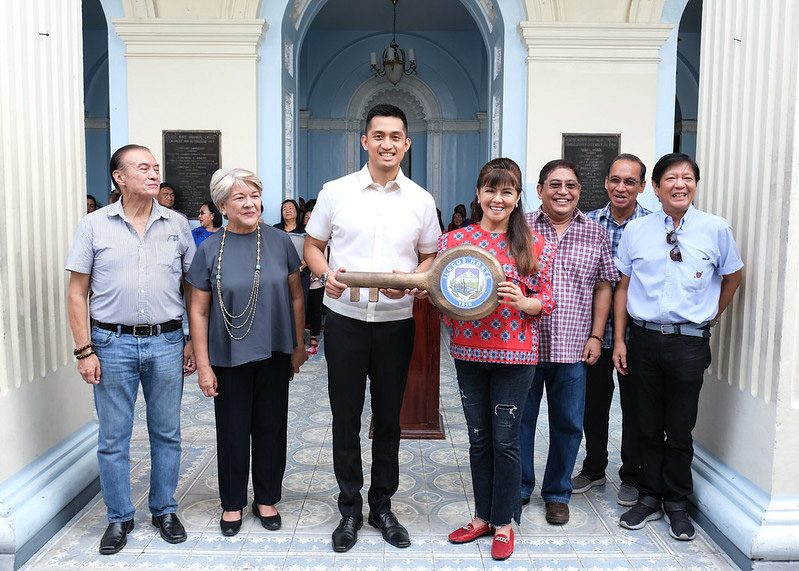 LAOAG CITY, Ilocos Norte – Laoag City Mayor Michael Marcos Keon on Tuesday, December 14, broke his silence on his rift with Senator Imee Marcos and presidential bet Ferdinand “Bongbong” Marcos Jr, saying that their and their children’s decision not to support his reelection bid “hurt” him.

“I have been walking a road of treachery,” Keon said, referring to how the Marcos clan cut ties with him and threw its support behind Keon’s rival for mayor, incumbent Vice Mayor Vicentito “Toto” Lazo. But Keon also stressed that he would still support the presidential candidacy of Bongbong Marcos for the May 2022 elections.

Estranged from the local “Team Marcos,” Keon filed his candidacy for reelection in October as an independent candidate.

To this day, Keon said that he was “bewildered” and found it “hard to accept” that “my family could believe the false narratives” concocted by his detractors which could be why his relatives are not backing his reelection bid.

It was the Marcoses who had asked Keon to run for mayor in 2019, and he defeated the incumbent at the time, Chevylle Fariñas, ending the Fariñas’ control of City Hall. The Marcoses fielded Keon despite being at odds with them in the past, particularly in 2010 when he ran – but lost – against Imee Marcos for Ilocos Norte governor.

Keon said he never “asked to become [Laoag] Mayor and circumstances had evolved in such a way that I am now [here].”

In October, Keon said that he decided to just file as an independent candidate after “somebody in Team Marcos” told him that he would be asked to slide down and run as provincial board representative instead of gunning for reelection. Keon said that prior to this, he was constantly assured of support for his planned reelection bid by the team.

When Keon filed as an independent candidate, the other Marcoses expressed surprise. Ilocos Norte Governor Matthew Manotoc, Keon’s nephew, even bid him “good riddance” in a statement in October.

Set up to fail?

“In fact, his [Manotoc’s statement] of ‘good riddance’, that actually hurt me specially within the context of [being Ilocano],” Keon admitted.

On November 30, Senator Imee Marcos officially endorsed the mayoral bid of Lazo. The senator said she set aside blood ties in favor of upholding the interests and development potential of Ilocos Norte and Laoag City.

Keon alleged that his performance as mayor of Laoag City had been “set up” to fail by his detractors who also attempted to get him suspended from the position for “four times.” He said that his projects and programs for the city were “undermined” by Lazo.

Earlier, Keon had faced accusations over failed COVID-19 pandemic response in the city, slow vaccination rollout, and breaking pandemic protocols. He received two show-cause orders from the Department of the Interior and Local Government and was “reprimanded” in October. He said that all these were efforts to bring him down.

Keon, who will be in a three-way fight for mayor against Lazo and former mayor Chevylle Fariñas, said that he will not back out of the race. “I will continue to run, I will see this through and continue,” he said.

Despite the rift, Keon said he would support the presidential bid of his cousin, contrary to what he described as a fake post which circulated on social media on Monday, December 13, that slammed the Marcos siblings’ credibility.

He said that the fake post was disseminated locally as a “means to further destroy my relationship with my relatives.”

“I have worked extensively with BBM [Marcos Jr],” Keon said, adding that he believed in the “capacity” of Marcos Jr. as a leader and that he would make a good president of the country because he has “learned a lot and the hard way.”

In statements made on Friday, December 17, Manotoc said the immediate Marcos family “is still all united… we are all on the same page.”

He explained the family last name had nothing to do with who they will be supporting in the 2022 polls, saying, “It’s a public trust, and you have to earn it each time. That rings true with the Marcos family; hindi ibig sabihin na kung Marcos ka (it doesn’t mean that just because you’re a Marcos), we will blindly support you.”

“There’s a still a standard on performance and governance and it is a big responsibility,” added Manotoc, as he questioned whether the city was able to transform and become better under his uncle’s administration.

Manotoc also said it was not his intention to “prevent” his uncle from running as Laoag Mayor in 2019, contrary to what Keon revealed earlier.

Manotoc then explained that as a “neophyte” politician, he only asked his uncle to “hold on and wait” from filing to run as Laoag Mayor in 2019 polls so as not to jeopardize a “deal” made with the Fariñases, the other local dominant political family, during that year.

The Fariñases apparently wanted the Marcoses to spare Laoag City so as to keep control of the provincial capital as they had done for decades. But as Keon set ground in Laoag and filed to run as mayor in 2018, this prompted former majority house leader Rodolfo “Rudy” Fariñas, family patriarch, to tell the Marcoses at the provincial Commission on Elections that the “deal is off,” said Manotoc.

“The truth was, the unofficial verbal agreement with Rudy [in 2019], it never involved Laoag City. But we already foresaw that once Rudy saw that we filed in Laoag, it’s obvious he will change the deal,” Manotoc said in a mix of English and Tagalog.

“But he (Keon) went away and filed and everything turned out the way it did,” Manotoc said, adding that once Keon made up his mind, chances are he would no longer look back.

“I hope this is the end of it, it’s such a waste of time and effort,” lamented Manotoc as he urged everyone to move forward as people could already be tired over this episode of “petty politics.” He said that he would still be open to working with his uncle over the remaining months of their terms.