COTABATO CITY, Philippines – Bangsamoro Interim Chief Minister Murad Ebrahim recognized that presidential candidate and Vice President Leni Robredo had worked to help bring peace to the region, telling her they need “like-minded leaders” to continue what they have started.

Robredo was the second presidential candidate to meet with Murad and other key officials of the Bangsamoro Autonomous Region in Muslim Mindanao (BARMM) on Wednesday, March 16, visiting Cotabato City around a month after Manila Mayor Isko Moreno.

Videos of the speeches of Murad and Robredo were sent to the media by her office on Wednesday night. Present during the meeting were BARMM Cabinet members, Robredo’s campaign manager Bam Aquino, and her political adviser, Quezon City 6th District Representative Jose Christopher “Kit” Belmonte. 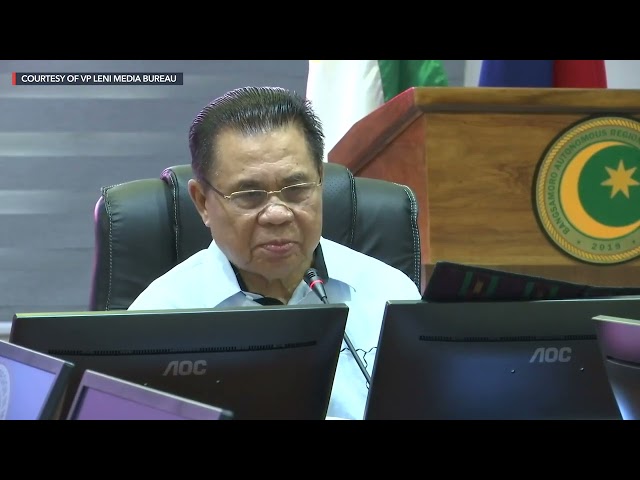 Murad himself acknowledged that Robredo had co-authored the proposed Bangsamoro Basic Law (BBL) back when she was congresswoman in the 16th Congress under the late president Benigno “Noynoy” Aquino III.

The passage of the BBL was stalled, however, following the deadly Mamasapano clash in 2015, which saw a decline in Aquino’s public opinion ratings.  The Bangsamoro Organic Law was passed during the administration of President Rodrigo Duterte.

Still, Murad has not forgotten what Robredo has done for the Moro people.

In the meeting, Robredo recalled how she actively joined hearings on the Bangsamoro bill, which required her to constantly meet with many officials leading the BARMM now.

“As such, for the Bangsamoro, it is very crucial to engage with like-minded leaders that have the political will to continue the implementation of the peace process. And together, we will continue to walk the path of peace and progress, not only on the Bangsamoro and Mindanao, but the entire country,” said Murad.

He even said that the BARMM looks forward to Robredo becoming the “next president,” though Bangsamoro Education Minister Mohagher Iqbal later told reporters in an ambush interview that this isn’t a formal endorsement yet. Murad had also called Moreno “incoming president” during their meeting in February.

“We know that she was among those, with the late president Noynoy Aquino, who worked hard in implementing, trying to craft…this agreement, which finally created the Bangsamoro Autonomous Region in Muslim Mindanao. There are only some incidents…at the last part of the administration of the late Noynoy Aquino that prevented the establishment of the BARMM,” said Murad.

Iqbal said BARMM leaders have yet to decide on who to support for president.

(I repeat, so far, BARMM headed by Chief Minister Ebrahim has no official pronouncement yet on who to support. But all candidates are welcome to come here and talk to them.)

Bangsamoro Interior Minister Naguib Sinarimbo also told reporters they have an internal timetable as to when they would make the endorsement, but this would depend upon the opportunity to speak with other presidential candidates so their choice would be “fair and objective.”

In the 2016 vice-presidential poll that saw her going head-to-head against the late dictator’s son Ferdinand Marcos Jr., Robredo won the Moro vote in the now-defunct ARMM. Moros gave her 566,455 votes while Marcos only got 331,762 votes.

Fast forward six years later, Marcos is now leading the presidential race, but the people of the Bangsamoro continue to reject him, recalling how his father, the dictator, slaughtered their forefathers in cold blood during the Martial Law years.

The younger Marcos has yet to visit the BARMM since declaring his presidential bid.

Robredo to Moros: We were with you in the struggle since day 1

In her meeting with BARMM officials, Robredo talked about her “resibo” or proof of helping the Moro people even before she sought to become the next president. Apart from championing the BBL as a lawmaker, a bulk of Robredo’s Angat Buhay anti-poverty programs benefitted the BARMM. 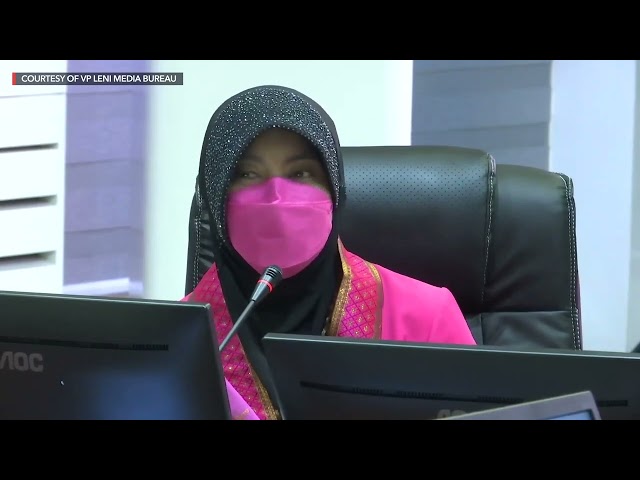 “Ako po, we are one with you. Ito ‘yung sinasabi ko na, you know, it is very easy to commit, pero I think the difference is, the mere fact that we were with you in the struggle from day one, makes all the difference,” said Robredo.

(We are one with you. This is what I mean when I say that it is very easy to commit, but I think the difference is, the mere fact that we were you in the struggle from day one, that makes all the differrence.)

(I am one with you. I am one with you in yearning not just for peace, but for justice that we have all been longing for. Because I do believe that it is only when justice is served that peace will prevail.)

Robredo said she had somehow “inherited” her advocacy to help bring about peace and justice to the Moros from her late husband, longtime Naga City mayor Jesse Robredo who served as interior secretary during the Aquino administration.

When he was alive, Jesse wanted to unite local government officials in the Bangsamoro and explore ways for peace to be achieved. But a tragic plane crash took away his life in August 2012.

Jesse’s death eventually thrust his wife Leni into the national political spotlight. Robredo’s experiences as a development worker and alternative lawyer greatly influenced the clean, honest, and good governance she has been espousing since then – a homage to Jesse.

Though Robredo has yet to gain the categorical support of BARMM leaders, influential Moro leader and Basilan Representative Mujiv Hataman already endorsed her for president. Hataman used to be governor of the now-defunct ARMM.

Some 45,000 “Kakampink” supporters of Robredo even trooped to Isabela City in Basilan on Wednesday night, a show of force for the lady in pink in Mindanao, one of three major Philippine islands where Robredo is also at her weakest, according to some polls. – Rappler.com