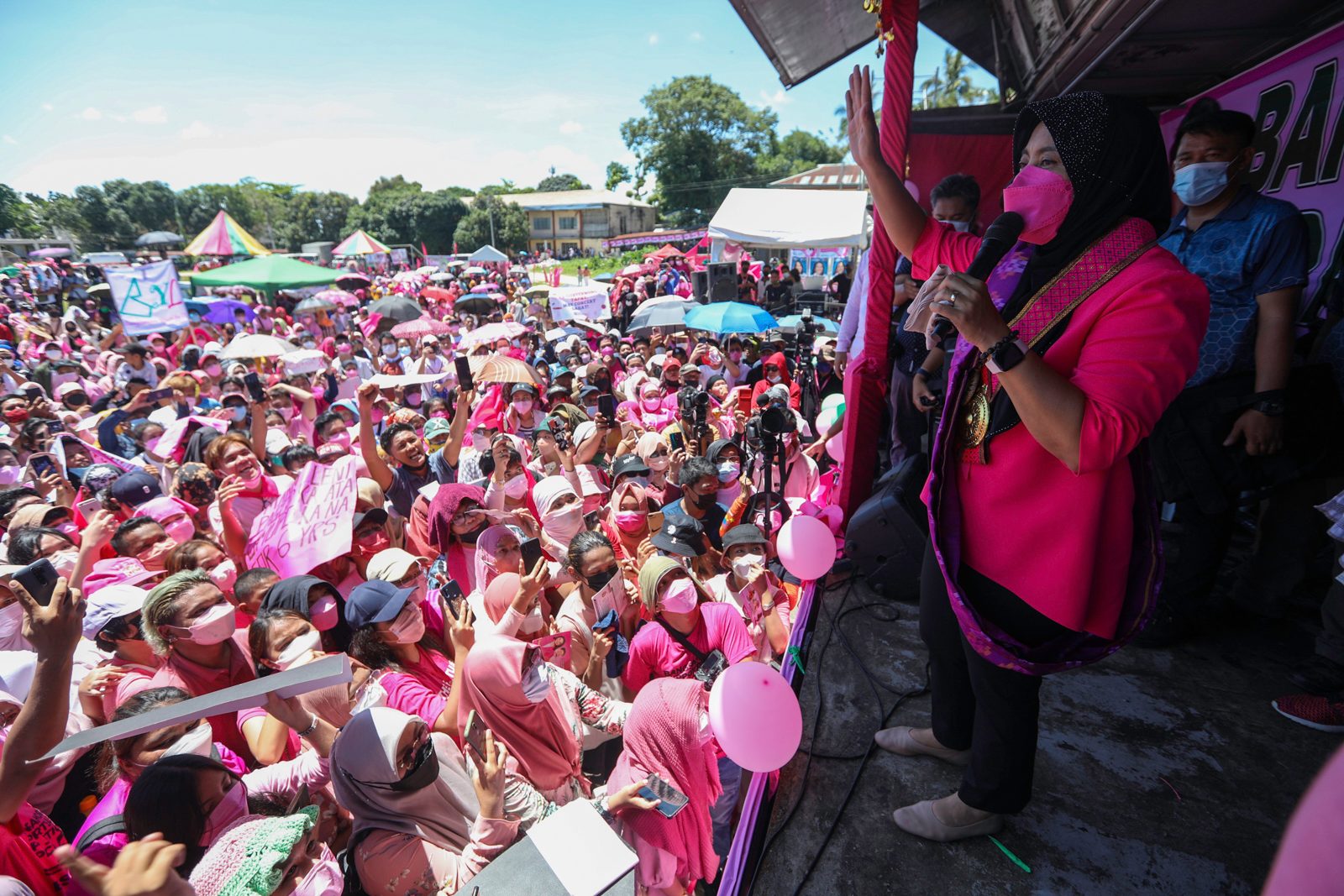 Supporters of presidential candidate Vice President Leni Robredo from Cotabato and Maguindanao braved the heat of the sun to hear her message in the People's Rally they organized for her at the Cotabato State University on Wednesday, March 15. It has become traditional in these events for supporters to hold up placards with their messages of support and for Robredo to read and comment on them. Photo by VP Leni Media Bureau

Facebook Twitter Copy URL
Copied
(1st UPDATE) Basilan Representative Mujiv Hataman warns Moros against allowing the return to Malacañang of the Marcoses, whose hands are stained by the blood of their forefathers

Hataman also warned Moros against backing the survey frontrunner, Ferdinand “Bongbong” Marcos Jr., saying the family whose hands are stained by their forefathers’ blood should not be allowed to return to Malacañang.

In a statement released on the same day Robredo stepped inside the Bangsamoro Autonomous Region in Muslim Mindanao (BARMM), Hataman said Robredo knows the story of the Moros – from the bloody massacres they suffered under the Marcos regime to the root causes of terrorism that remain unanswered to this day.

(She knows our story because whenever there is conflict, calamity, or any issue, she immediately goes to us, steps into ground zero, and returns time and time again – not to seek votes, but to directly give aid and listen to our stories.)

Facing some 3,000 “Kakampink” supporters at the Cotabato State University, Robredo recalled that a bulk of her Angat Buhay anti-poverty programs benefitted parts of Mindanao, as communities here needed them the most.

When war struck Marawi City, Robredo was quick to give assistance to displaced residents. The first Angat Buhay Village – a housing project under Robredo’s office – was constructed in Marawi.

The Moros suffered heavily under the brutality of the Martial Law years, their people slaughtered in cold blood in at least two massacres which happened in Mindanao between 1972 and 1981.

The first was the Palimbang massacre or the Malisbong massacre, where 1,500 men were killed in Sultan Kudarat on September 24, 1974. The second one was in Bingcul village on November 12, 1977. Government forces reportedly opened fire and killed at least 42 villagers.

There were other massacres of Muslims beyond the 10-year military rule of Marcos, including the infamous Jabidah massacre on Corregidor Island in 1968.

(We were massacred. Many were forced to take up arms in the name of justice; many were forced to flee their homes. I am against the return to power of the family that started and benefitted from this oppression.)

For Hataman, Robredo is the Moros’ best chance to finally attain peace.

Robredo had co-authored the proposed Bangsamo Basic Law (BOL) when she was still Camarines Sur congresswoman in the 16th Congress. BOL would eventually be passed in the next 17th Congress when Robredo was already Vice President.

In contrast, Marcos had thumbed down the Bangsamoro bill when he was still a lawmaker, calling it unconstitutional. 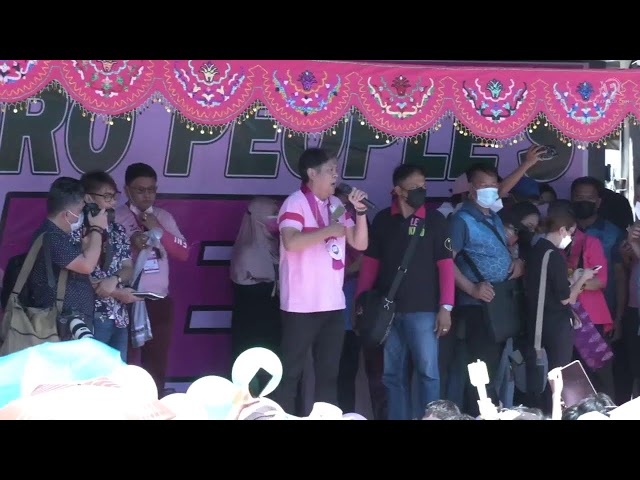 Hataman’s endorsement can be seen as a boost to the Robredo campaign in BARMM, where leaders of the autonomous government have yet to categorically endorse a presidential candidate. They did, however, invite another presidential bet, Manila Mayor Isko Moreno, to attend a rally attended by thousands in Buluan, Maguindanao, in February.

Hataman also controls a vast network in the region, having previously been governor of the now-defunct ARMM which BARMM had replaced when the BOL took effect.

In both his successful congressional bids in 2016 and 2019, Hataman ran and won for office under the once-ruling Liberal Party, which Robredo chairs.

Hataman had been instrumental in Robredo’s victory in the ARMM in the 2016 vice-presidential race, where she defeated Marcos with 566,455 votes against his 331,762 votes.

Hataman and his wife, Mayor Djalia Turabin-Hataman, hosted another grand rally for Robredo in Isabela City on Wednesday evening, attended by thousands of supporters.

Robredo faced an energetic crowd of around 3,000 Kakampinks in Cotabato City, most of whom in high spirits despite enduring the summer heat for around five hours just to see her.

In her speech, Robredo said her Angat Buhay programs in Mindanao are the “resibo” or proof of what she is capable of doing as a leader, and what she can do more if she becomes the next president.

(If I won by a huge margin before and you weren’t there yet, what more now that you’re here with me? So, can you help strengthen my victory?)

Rodel Abduraman, one of the Kakampinks who went to Cotabato City to see Robredo, believes she would be able to fulfill the promises under the BOL. He, too, has not forgotten the atrocities committed by the Marcoses against Muslims.

He refuses to back the dictator’s son for president, remembering how the patriarch caused the deaths of Moros.

(We remember that Bongbong Marcos’ father was the one who ended the lives of around 120,000 Bangsamoro during his regime. We won’t forget… That is the reason why the Bangsamoro suffered.)

First-time voter Patricia Bianca Capao-an told Rappler she once did not like Robredo because she was surrounded by a lot of supporters of Marcos and President Rodrigo Duterte, whose daughter Davao City Sara Duterte is Marcos’ running mate.

But she changed her mind after Robredo’s office worked with her student organization to help bring aid to calamity victims in her province.

“May track record, hindi magnanakaw, maraming nagawa, at may magagawa pa (She has the track record, she isn’t a thief, she has done a lot of things, and she can do more for us)!” Capao-an said when asked why she is going to vote for Robredo in May.

Marcos, however, continues to outpace all presidential contenders in the latest Pulse Asia survey, which he dominates with 60%. Robredo remains a distant second placer, her 15% voter preference dipping by one point from January.

Robredo is unfazed by the survey’s figures, believing the mock polls have yet to capture the growing fever on the ground. Tens of thousands of Kakampinks continue to join her grand rallies nationwide.

She even pulled off a show of force in known bailiwicks of her opponents: Isabela and Cagayan (Marcos), Manila (Moreno), Cavite (Senator Ping Lacson), and General Santos (Senator Manny Pacquiao).

First presidential bet to campaign in Basilan in 30 years

On Wednesday night, Robredo traveled by motorized outrigger to Isabela City, Basilan, where an estimated crowd of 45,000 gathered for the Sahaya Basileniyo: Basilan People’s Rally for her ticket. It was the first time in 30 years that a presidential candidate campaigned in the province.

The first was the late Senate president Jovito Salonga, who barnstormed the province when he ran for president in 1992.

In her speech, the presidential candidate noted that she had frequented Basilan over the last six years of her vice presidency for projects to benefit various sectors. She also vowed to help improve the image of the island province – which has been associated with peace and order problems – which would in turn boost the local economy.

On Thursday morning, March 17, Robredo traveled by boat to the remote community of Barangay Marang Marang in Isabela City, becoming the first presidential candidate to set foot in the village with a population of over 2,000 people. She was accompanied by congressman Hataman.

She later keynoted the Basilan Women Executives and Legislators Summit in Isabela City. The event gathered, for the first time, all female elected and career executives in Basilan. Pangilinan attended the event too. – With reports from Richard Falcatan/Rappler.com