TANDEM. Manila Mayor Isko Moreno and Doc Willie Ong file their respective certificates of candidacy for the May 2022 polls at the Sofitel hotel in Pasay City on October 4, 2021.

Facebook Twitter Copy URL
Copied
But what does the doctor have over politicians running for VP? 'Wala akong utang sa negosyante,' he says.

MANILA, Philippines – Isko Moreno’s running mate doctor Willie Ong denied that his hyper-focus on health issues would be a disadvantage if he were to win the vice presidency, a position that would entail replacing the president in case of death, resignation, or impeachment.

“Actually, inaaral namin ‘yung ibang issues (We are studying the other issues),” he said in a Rappler Talk interview on Monday, January 31, when asked about criticisms that he is a “one-trick pony” candidate.

He referred to Moreno’s “listening tours” starting in September where he joined the mayor in dialogues with various sectors – from factory workers to farmers to urban poor communities.

“Since September, October, November, I’ve been part of discussions on all issues, like discussions with farmers, on housing, education, poverty, foreign direct investments, West Philippine Sea,” he added in Filipino.

Watch the interview below: 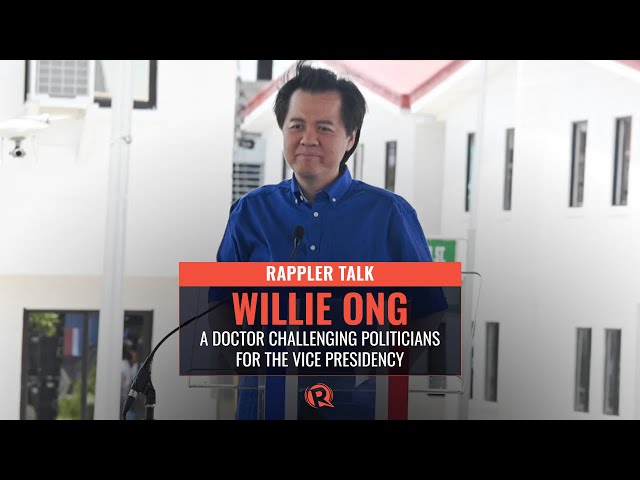 Ong denied he needed to do a lot of “catching up,” saying he’s been studying various governance issues since he ran for senator in 2019. He said he joined most of the senatorial debates back then and would join as many vice presidential debates and fora as his schedule permits this time around.

Asked about his position on the West Philippine Sea, economy, and more, the vice presidential bet just said he is adopting all the stances taken by his standard-bearer Isko Moreno.

A vice president needs to be well-versed in governance issues aside from health – like national security, economy, agriculture, disaster response, local governments, environment, and more – because they will become the president if the current leader dies, resigns, or is impeached.

He or she may also be called upon by the president to assist in different aspects of governing, or when there is a calamity, crisis, or urgent national issue that needs attention.

How will he convince voters to pick him over them?

Initially, Ong claimed he wasn’t out to “convince” voters and said he has nothing negative to say about his opponents.

But he eventually presented himself as a candidate with no strings attached because of his supposed policy of not accepting any donations from businessmen.

Ong also portrayed himself as a non-traditional politician in that he will never attack or negatively comment on other politicians, including his rivals for the vice presidency.

He even said, if asked in debates to criticize the other bets, he might just say, “no comment.”

(I won’t badmouth. I don’t want to badmouth. I think it’s counter-productive. If I have negative opinions about them, I just won’t say anything.)

But will he refuse to comment on issues brought up by other candidates and which matter to Filipinos?

He tried to dodge when Rappler asked for his stance on vice presidential race frontrunner Sara Duterte’s proposal to implement mandatory military service for Filipinos who turn 18.

Ong has indeed been active in proposing ways to address the pandemic. Moreno has said he would appoint Ong health secretary if both of them were to win in May.

The doctor-turned-politician proposes building more hospitals and buying more COVID-19 medicines to allow the economy to reopen. He has said the Philippine General Hospital should be relieved of its current role as main COVID-19 referral facility so it can go back to serving patients with other ailments.