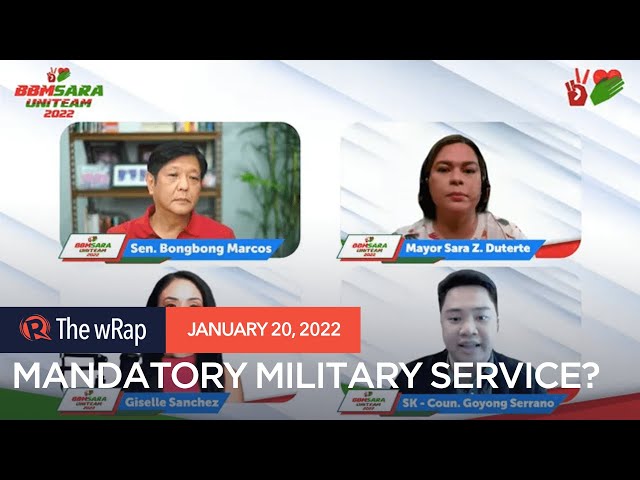 “Hindi po ROTC lang… Dapat po, pagtungtong mo ng (Not just ROTC. When you turn) 18 years old, you’ll be given a subsidy, you’ll be asked to serve our country, doon sa (via the) AFP,” she said on Wednesday, January 19, during a “virtual caravan” that featured her running mate Bongbong Marcos Jr and several senatorial candidates whom she is supporting in 2022. Local government officials from the National Capital Region also joined Marcos and Duterte in the call.

Reserve Officers’ Training Corps (ROTC) is a voluntary college program designed to produce military reservists. Sara’s father, President Rodrigo Duterte, made a bid to make ROTC mandatory for all college students early in his presidency, but this plan fizzled out.

Duterte and Marcos were asked by a Sangguniang Kabataan official: “As president and vice president, how do you intent to use your respective offices as platforms to spring young people into action and become part of nation building? Drawing from your LGU experience, are there programs you want to scale up?”

Since entering her name into the race via substitution, the younger Duterte had led early preference polls.

The ROTC was abolished after a University of Santo Tomas student was murdered for exposing alleged corruption in the school’s military training program. The program then became voluntary in 2002.

The Davao chief executive said she’d bring to the national scene Sangguniang Kabataan programs that focus on disaster preparedness. The mayor said that in Davao City, she told her youth council head to shun “leagues, pageants, and dancing contests” because they were a “waste of government resources.” Instead, youth leaders were training to be community emergency responders.

She also highlighted the city’s youth and adolescence development center, which focuses on programs that address mental health wellness including addressing Sexual Orientation and Gender Identity Expression concerns, teen pregnancy and sex education, and HIV incidents among the youth.

Sara is running on the promise of “continuing change,” a reference to her father’s promise of change in 2016.

Although she’s running for the second-highest post in the land, her candidacy is, in effect, the scaling up of the Duterte political dynasty. Her two brothers are elected officials themselves – Sebastian is the incumbent vice mayor who is vying for mayor in the May polls, while Paolo is seeking reelection as 1st district representative.

A month before 2022 lineups were finalized, tension also seemed to be brewing between the two Dutertes. The President had wanted his daughter, who was then leading presidential preference surveys, to run as his successor. After Sara filed for vice president via substitution, Palace officials said Duterte would also run for vice president. A day later, he filed his candidacy for senator, which he eventually withdrew.

The Vice President has no defined role in the Philippine government but is usually appointed to a Cabinet position, presuming they are in good terms with the sitting president. The Philippines elects its president and vice president separately. The incumbent vice president, Leni Robredo, was appointed to a Cabinet post by the older Duterte but resigned barely 6 months later after she was told to stop attending Cabinet meetings.