On ground: The other side of Robredo’s campaign 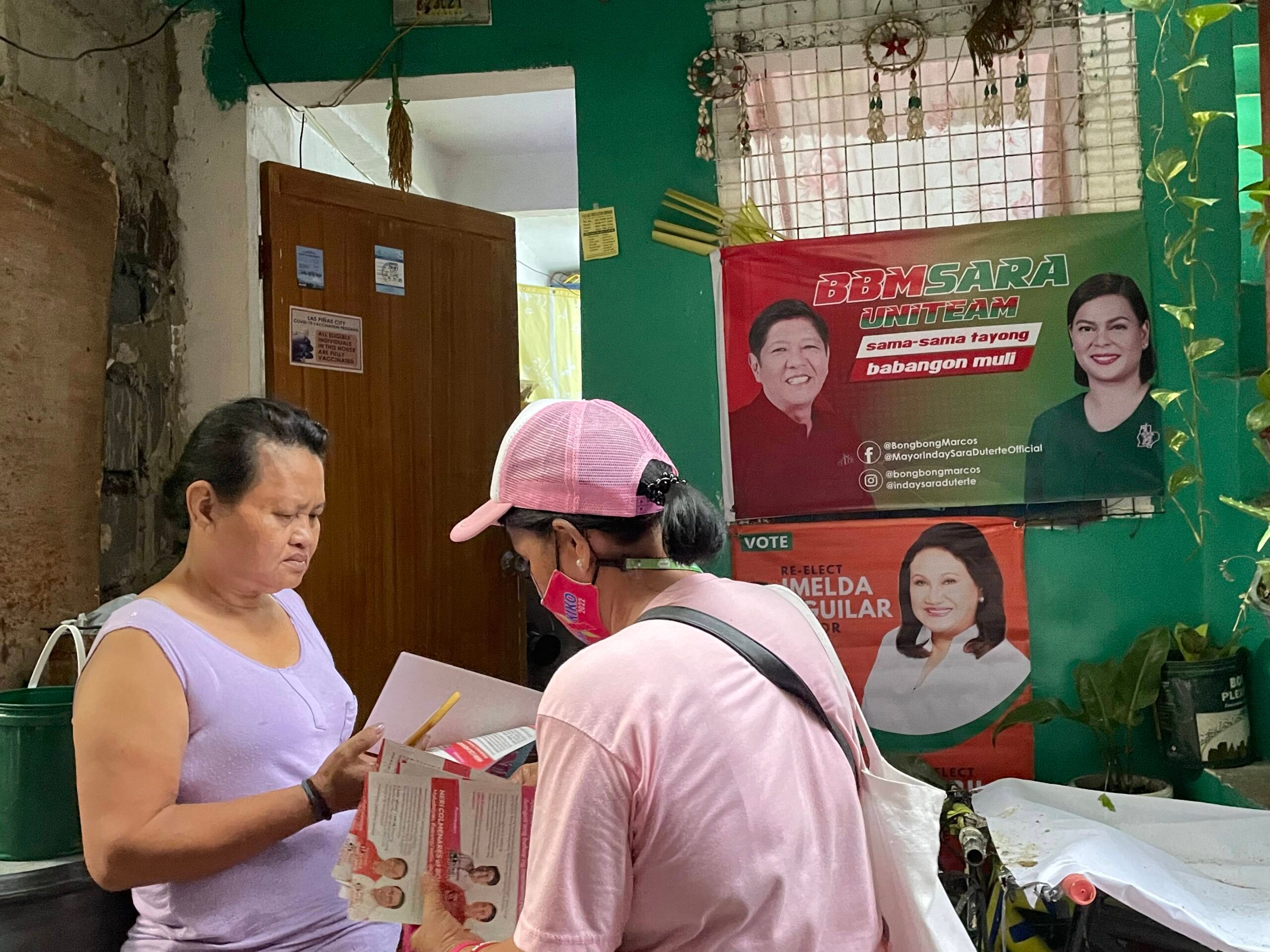 MANILA, Philippines – The faces of presidential aspirant Ferdinand Marcos Jr. and his running mate Sara Duterte can be seen almost everywhere in Las Pinas, a city located at the southern tip of the Metro where the Villar clan rules.

On the afternoon of April 13, a day before the start of the Holy Week campaign ban, I joined a group of volunteers for Vice President Leni Robredo and Senator Kiko Pangilinan, UniTeam’s rivals.

Once we set our foot in this village, it felt like entering the lion’s den. From the banderitas made out of campaign posters to big tarpaulins on respective houses, everything in the area screamed Marcos, Duterte, and the Villars.

Although they seemed to be at a disadvantage, Kakampinks remained positive.

“Kaya iyan,” volunteer William Pingol reassured the team as members scanned the area. He gathered his colleagues for a short prayer, a guide for the day’s work.

They patiently knocked on every house, even on houses where the UniTeam’s faces were plastered.

Surprisingly, some of the households who were supporting the Marcos-Duterte tandem still opened their doors to welcome the Kakampinks.

Volunteers, in a cheerful tone, still asked if they could introduce their bet’s platforms to these residents. Although skeptical, most agreed to listen to what a Robredo governance can offer.

A middle-aged woman, who initially had a doubtful expression, showed curiosity after hearing that the Office of the Vice President has been offering free healthcare services to Filipinos during the COVID-19 pandemic.

(Even as Vice President, Leni has helped many people. So we are sure that if she wins, these projects will continue.)

Glancing back-and-forth at the huge UniTeam poster behind her to the pink flyer that she was holding, the woman was in deep thought even after the volunteer bid goodbye.

Meanwhile, on the other side of the alley, a head of the family was shouting at volunteers, insisting that they could not put up Robredo’s campaign materials outside his home.

“Akin na [pertaining to the pink sticker], akong bahala,” said a young woman who was probably his child.

The Kakampinks were briefed on how to communicate in a sometimes bitter political landscape. No trace of fear even though some “non-pinks” were trying to unnerve them. Some even accused them of being paid but still, no amount of intimidation could scare them away.

Traditional politics will remain evident in communities like Barangay Talon Tres. But after people-driven campaigns like this, maybe one or two could be convinced that there is an alternate route to progress. – Move.PH