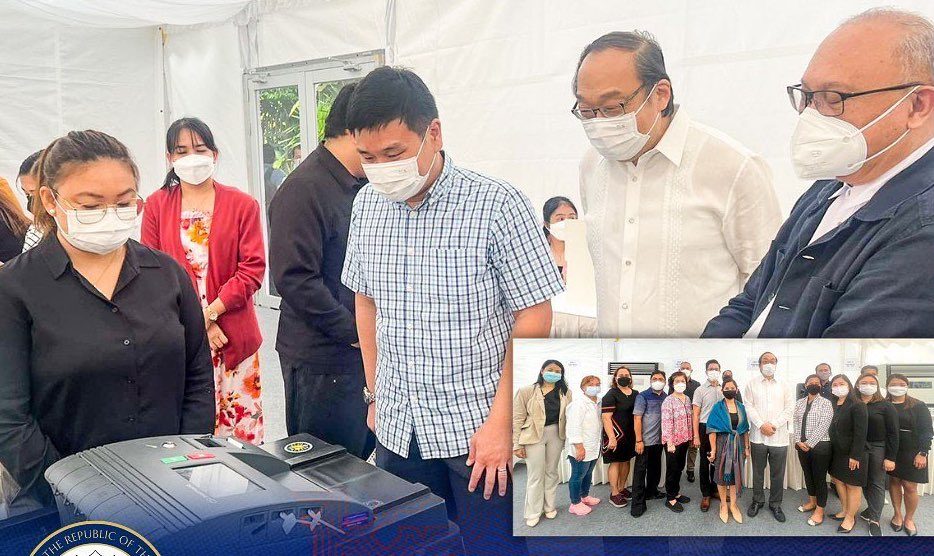 VCM TESTING. The Philippine Embassy in Singapore conducts on April 5, 2022 the Final Testing and Sealing (FTS) of the Vote Counting Machines (VCMs) that will be used for the 2022 Philippine National Elections, which will run from 10 April 2022 to 9 May 2022.

Facebook Twitter Copy URL
Copied
Overseas Filipinos are the first to cast their votes in the high-stakes, pandemic-era 2022 Philippine elections

MANILA, Philippines – The monthlong overseas voting for the 2022 elections begins Sunday, April 10, for Philippine embassies, consulates, and other diplomatic offices around the world.

The voting period will run from April 10 to May 9. Overseas Filipinos are set to vote first in the high-stakes, pandemic-era 2022 elections, as Filipinos in the Philippines will only cast their votes on election day, May 9.

#PHVote Guides: Where, when, and how to vote overseas Over 1.6 million Filipinos are registered to vote overseas – a drop for the first time since overseas elections began in 2004. More than 2 million Filipinos returned to the Philippines during the COVID-19 pandemic, some of whom were due to displacement.

They will vote either by personal mode, which involves going to the Philippine posts personally to accomplish their ballots, or by postal mode, wherein voters will receive their ballots via mail and send them back to the embassy. (READ: LIST: Modes of overseas voting in the 2022 elections)

In areas with a postal mode of voting, some consular offices have opted to allow voters to pick up and drop off their ballots at the posts. Those who will do so must accomplish the ballots in their own time, as there may be no provided voting area.

OFW rights groups have flagged possible disenfranchisement in the 2022 elections due to an alleged lack of engagement from the embassies and consulates. Up until the final days before the start of overseas voting, many were left in the dark as to how the electoral processes would go – even in vote-rich countries like Hong Kong and the United States.

For instance, voters in the US and Canada, the third and fifth most vote-rich countries in 2022, should expect to receive their ballots after April 10, the Commission on Elections (Comelec) said. Nerissa Allegretti of 1Sambayan USA, one of the community leaders who called out the possible disenfranchisement, said that ballots were mailed to them as early as March in previous elections.

The Comelec has acknowledged issues in the “late” receipt of postal ballots, but according to Comelec Commissioner Marlon Casquejo, they did not want to use the COVID-19 pandemic as an excuse.

Nongovernment organization Center for Migrant Advocacy also earlier raised possible issues in the conduct of overseas voting due to limited funds. The government granted a P111.9-million budget for the overseas elections, which was “half of what was given in 2007,” Director Bea Wee-Lozada of the Comelec Office for Overseas Voting said in a House hearing on February 2.

“We may not be able to provide the two-way postage that was requested initially by members of the House…because of the lack of budget that was given to the Comelec for overseas voting,” Lozada said.

Turnout per major area – comparing Asia Pacific, Europe, Middle East and Africa, and the Americas – has not reached even half of the number of registered voters in the past five elections. At its highest, it was 42.2% among Filipino voters in the Asia Pacific region in 2016.

The pandemic situation also made it difficult for aspiring voters in the 2022 elections to register before the registration period closed on October 14, 2021, which was two weeks earlier than the extension for local voters’ registration. Some overseas Filipinos flagged a number of reasons for not being able to register, such as the limited number of diplomatic posts where qualified voters can register, the priority to stay safe and healthy in a global pandemic, and the fact that not all employers would give them a day off to vote.

In the 2016 elections, President Rodrigo Duterte and former senator Ferdinand “Bongbong” Marcos Jr. won in the overseas presidential and vice-presidential races, respectively. The dictator’s son and namesake is trying his luck again as he faces a rematch with Vice President Leni Robredo in the presidential race this time. In 2016, Robredo won as vice president in North and Latin America, but Marcos dominated the rest of the major areas.

Marcos is currently the presidential frontrunner in pre-election surveys conducted in the Philippines, with Robredo as his closest rival. There have been no widely accepted, credible surveys among overseas voters.

Follow this page for Rappler’s live updates on the overseas voting for the 2022 Philippine elections. – Rappler.com