Facebook Twitter Copy URL
Copied
In various issues, vice presidential candidate Senator Kiko Pangilinan finds a way to circle back to his advocacy for the rights of farmers and fisherfolk

MANILA, Philippines – In the vice presidential debate hosted by CNN Philippines, Senator Francis “Kiko” Pangilinan put two issues close to his heart at a constant occurrence in his answers: agriculture and reforms in the Philippine justice system.

Pangilinan, who is also a lawyer and farmer, related these two topics to various issues that were being asked of him, whether it was about corruption or education, in the debate held on Saturday, February 26. 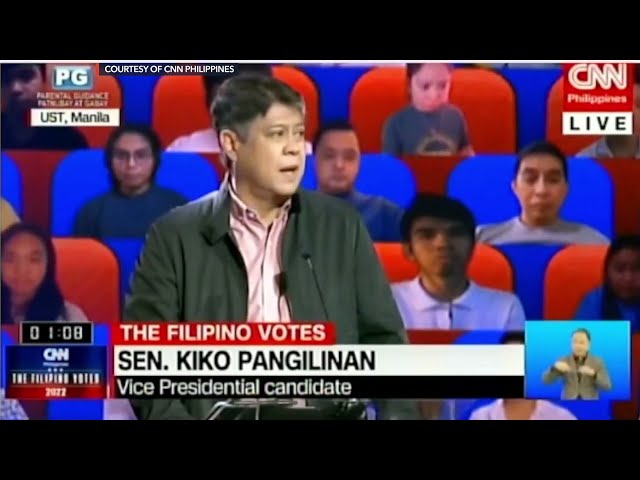 (Among all candidates running for vice president, and in 20 years of elections in our country, I am the only candidate advocating and finding solutions for hunger, high prices of food, and agriculture. We will focus on providing support to farmers and fisherfolk.)

Always going back to agriculture

In numerous topics, Pangilinan found ways to circle his answers back to his top advocacy.

The senator was asked what he has done in the past to prove that he is capable of fighting corruption as vice president, to which he referred to his time as food security czar under the Benigno Aquino III administration.

During his time on the board of the National Food Authority, Pangilinan said that the NFA rejected the bids from Thailand and Vietnam four times due to tongpats or alleged kickback schemes within the Department of Agriculture that caused higher rice import prices.

Pangilinan claimed the country was able to save P7 billion because of these bid rejections.

Asked about education, Pangilinan described his tandem’s plan to set aside P100 billion realigned from the national budget to fund students’ gadgets and internet for the continued hybrid learning system expected to continue through the COVID-19 pandemic.

(But another problem we must address is the malnutrition of our children. How can you study properly if your stomach is rumbling? Ninety-five young people are dying every day, our children, because of malnutrition. That is what we need to do because we are food insecure.)

As Pangilinan described the need to assert the Philippines’ arbitral ruling victory in the West Philippine Sea, he mentioned how it was partly an issue of food security, since the country has access to aquamarine resources in its exclusive economic zone.

Even up to his closing statement, farmers and fisherfolk were present. On questions on what would happen if he would be elected with a different president, or should an emergency happen to warrant Pangilinan to step up to the presidency, the marginalized and the agricultural sector would always come first, he said.

Another promise that Pangilinan repeatedly made known in the debate was his plan to “modernize” the judiciary. The immediate plan is to hire more people and to increase the salaries and benefits of judges and prosecutors as a way of increasing their fold, thereby strengthening the system.

The shortage of judges and prosecutors is a big problem in the Philippine justice system.

(That’s what’s difficult about our justice system – it’s slow. That’s why we need to modernize our justice system. We need to provide more funds so that prosecution can be done faster. Those found guilty must be penalized quickly, and so justice will come quickly as well.)

He proposed three things: fill up all the vacancies in the justice system and hire more judges.

A similar platform was pushed for by senatorial candidate Chel Diokno in 2019, who is now vying for a Senate seat again under the Robredo-Pangilinan tandem.

Diokno on PH justice system: Too many vacancies in judiciary, lacks transparency (If there are more accused who are penalized quickly, there will be more fear and respect of the law. So that is how you address corruption and misfeasance or abuse of power, not just in the BIR, but in other agencies as well.)

Pangilinan conducted himself calmly as he was cornered by fellow vice presidential candidate Rizalito David. David criticized Pangilinan’s statements of asserting the country’s rights in the West Philippine Sea when past administrations, as well as the Duterte government, have failed. He also called their tandem’s plan to set aside billions of pesos in cash aid “patronizing” micro, small, and medium enterprises (MSMEs) rather than empowering them.

Pangilinan did not answer the latter part of David’s criticisms, but instead reiterated his plan to “resume” maritime enforcement patrols in the WPS. Patrols by Philippine Coast Guard have not necessarily stopped, however.

“I am not satisfied because they’re opening up SMEs to be eaten up by putting down the threshold by foreign entrepreneurs and businesses. And then they say that they’re protecting SMEs?” said Bello.

Pangilinan was not given a chance to respond. But earlier in the debate, Bello insinuated that Pangilinan said he wanted the Philippines to join the Quadrilateral Security Dialogue (QUAD), the strategic security dialogue among the United States, India, Japan and Australia.

Pangilinan asserted he did not say this, which is true.

The presidential bets are set to face off in CNN’s presidential debate set on Sunday, February 27. – with a report from Lian Buan/Rappler.com