MANILA, Philippines – Socialist professor Walden Bello was a clear highlight of the first vice presidential debate organized by CNN Philippines on Saturday, February 26, taking the role of the disruptor and calling Sara Duterte, who skipped the event, a “coward.”

Asked about the Cabinet post he would request if elected vice president, Bello said he would want to be finance chief but he ended that statement with a zinger on Duterte.

“We are going to legalize divorce and same sex marriage and we are going to pull the Philippines from the 17th century to the 21st century. Mayor Sara Duterte, why are you not here to defend your positions? Nganong talawan mangka, Inday(Why are you a coward, Inday)?” said Bello.

“Mayor Duterte is not here to face the people, she is a coward just like Bongbong Marcos is a fucking coward,” said Bello, as the cameras cut away to Duterte’s empty podium.

Duterte is not likely to attend any debate, while Marcos chooses the debates he attends, so far only going to the one organized by SMNI, owned by self-styled pastor Apollo Quiboloy, who has endorsed their tandem. Quiboloy is wanted in the United States for sex trafficking. 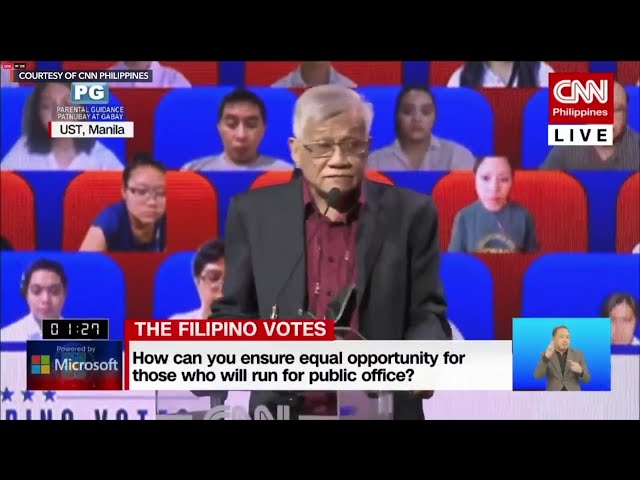 Out for Sotto’s head too

Bello set his eyes too on Senate President Vicente “Tito” Sotto III, current second placer in surveys, holding the senator accountable for enabling President Rodrigo Duterte’s government which is under investigation – albeit paused – by the International Criminal Court (ICC) for crimes against humanity.

The CNN Philippines’ debate format allowed candidates to make rebuttals to each other, and Bello made sure he was able to rebuke the statements of Sotto, and sometimes even of Senator Francis “Kiko” Pangilinan.

“Senator Sotto, he is rewriting history. Noong kasagsagan ng war on drugs (At the height of the war on drugs), did he say anything critical of the President? Did he protect Senator Leila de Lima, who was a member of the Senate? I mean, he was just supportive during that time when the President was destroying the integrity of the Senate,” said Bello.

Bello said this when they were asked whether they would support the Philippines rejoining the ICC. Both Bello and Sotto said yes.

However, in 2018, Sotto did not join minority senators such as his opponent Pangilinan in petitioning the Supreme Court to overturn Duterte’s unilateral withdrawal from the ICC.

It was in 2020 when Duterte pulled out from the Visiting Forces Agreement (VFA) that Sotto joined the Supreme Court petition. At the time, they did not answer why they left the minority senators in 2018 to question the ICC pullout when it’s the very same principle at play in the VFA issue – contesting the President’s unilateral actions without concurrence of the Senate.

Answering Bello, Sotto said that while he supports rejoining the ICC, he does not believe that there were more than 20,000 who died in the drug war. Instead he cited the more than 6,000 figure by the Philippine National Police (PNP), which is the figure for deaths in legitimate drug war operations. Combined with the killings of vigilantes, human rights groups peg the total killings at 27,000.

“What do you mean by ally? Because, dahil kami magkaibigan, ally na ako (just because we are friends, we are allies)? I have preserved the independence of the Senate always. And you can ask the members of the minority and the majority,” said Sotto.

When he wasn’t hell-bent on tearing Sotto apart, Bello focused his energy on Pangilinan.

At the onset of the debate when they were discussing maritime policies to address harassment of Filipino fishermen in the West Philippine Sea, Pangilinan said he would tap the country’s ASEAN neighbors – particularly those with similar claims in the area like Vietnam and Indonesia – and align with them. He also said he would he would also strengthen alliances with the US, Japan, and Australia, which had all slammed China’s 9-dash line principle.

Bello made a rebutall that the Philippines should have an independent foreign policy, mistakenly accusing Pangilinan of wanting to align with the so-called Quad or the Quadrilateral Security Dialogue that includes the US, India, Japan, and Australia.

Visibly irked, Pangilinan said, “I did not say we will join the Quad. You look at the tapes. Please, let’s stick to the facts.”

When he got another chance, Bello hit both Sotto and Pangilinan for passing the Corporate Recovery and Tax Incentives for Enterprises (CREATE) law, now Republic Act No. 11534, that lowers the highest corporate income tax in Southeast Asia.

Enacted into law by Duterte in 2021, some economists think it could drain the government’s tax collections amid a struggling econmy sunk further by the pandemic.

“Senator Sotto, Senator Pangilinan, pareho kayong nagboto sa (both of you voted for) CREATE Act that gave big tax breaks. So, what are you saying that you are not guilty of this process? Tama na iyang kalokohan na iyan (Let’s stop this foolishness),” said Bello.

Sotto answered: “It’s the Congress that pass (tax measures), bakit pinag-iinitan mo kaming dalawa (why are you grilling the two of us)? I don’t think we should, huwag nating patulan ‘yung mga ganong style (let’s not engage this kind of style.)”

Pangilinan defended the CREATE Act by saying that it was meant to provide support to big companies that also greatly suffered during the pandemic. Pangilinan said unprecedented situations call for drastic measures.

“I can understand Professor Bello’s concern regarding tax perks and tax breaks, but this is different, a pandemic we’ve never before experienced, which really killed [businesses]. You know our economy is really down. We felt it best to provide assistance for companies,” Pangilinan said in a mix of English and Filipino.

But it was clear that Marcos and Duterte were the primary targets of Bello, a veteran activist who had always been vocal against ascent to power of the children of two authoritarian rulers.

“I think the main problem that we face is the Duterte-Marcos tandem and I think they just spat on the face of Filipino people, [like saying] ‘You’re not worth giving you our progams,’ because they have no fucking progams. So let me just end with that. I don’t care what a number of people say but I feel very strongly about the absence of these two idiots in this event,” said Bello. – Rappler.com