MANILA, Philippines – On the first day of the official start of the local campaign period, the two leading candidates for the mayoral race in Quezon City held nothing back in a contest that’s proving to be among the ones to watch out for in the metro.

Mayor Joy Belmonte, who is seeking her second consecutive term, started early Friday morning, March 25, with a campaign speech that highlighted her administration’s COVID-19 programs while blasting her rival for supposedly spreading “fake news” about her.

(It’s not true that Marites is a woman. You yourself should be vigilant about the wrong information they’re spreading.)

Belmonte began her term at the end of June 2019, over eight months before the COVID-19 pandemic prompted the first lockdown in Luzon in March 2020.

Her challenger, Anakalusugan Representative Mike Defensor, has long criticized Belmonte’s handling of the pandemic. As the incumbent’s challenger, his campaign is hinged on calling for a referendum – of Belmonte’s governance and COVID-19 response.

He recently accused the mayor, daughter of former city mayor and House speaker Sonny Belmonte, of alleged overpricing of pandemic aid. Fact checkers and even the Commission on Audit have said no irregularities took place.

Responding to allegations of being a “fake news” peddler, Defensor maintained that he makes allegations based only on facts.

“Ang akin, dapat sana ipaliwanag niya pero ang problema, finile-an niya ako ng libel eh (She should be explaining her side but instead she sued me for libel),” said Defensor, who went on to express his sentiments against the weaponization of libel. 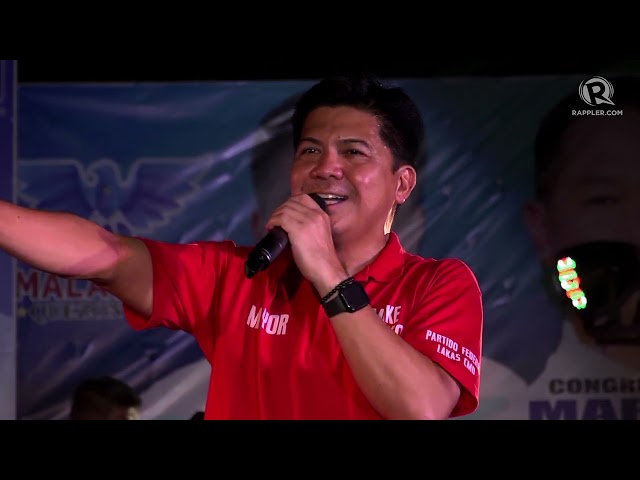 (The problem with libel, although it doesn’t bother me, [is that] can you imagine, for example, someone who’s poor posts a reaction on Facebook, I file a libel case because I didn’t like what was said. Whether I was wrong or right, that person would need to post bail if the court allows them to. That shouldn’t be the case, you can’t be onion-skinned.)

Defensor’s stance is close to that of advocates who are calling for the decriminalization of libel, which in turn is linked to calls for media freedom.

From national to local

Ironically, Defensor was among the legislators whose arguments led to the shutdown of the biggest media network in the country, the Quezon City-based ABS-CBN. The franchise loss was seen as a big blow to media freedom in the Philippines.

Defensor’s hand in the network’s franchise loss and retrenchment of employees was another issue Belmonte brought up in her proclamation speech.

(Others prioritized shutting down ABS-CBN. There’s proof of that. That’s what you must explain: How in the middle of a crisis, thousands of families suffered, and you let them lose their jobs. Didn’t you even think about how ABS-CBN employees would feed their families or send their children to school? Or even the businesses relying on ABS-CBN who also shut down?)

ABS-CBN was forced to halt its free TV and radio operations in 2020, months into the pandemic, after a House panel rejected its franchise renewal bid. Defensor was among ABS-CBN’s chief critics. As a result of the network’s franchise loss, it retrenched thousands of workers.

That Belmonte brought what many consider a national issue into a local race may be surprising to some but perhaps not to close observers. With ABS-CBN based in Quezon City, many of its former and current employees are residents of the vote-rich city.

Home to over 1.4 million registered voters in 2022, Quezon City is an important city in the national scene, too.

Belmonte belongs to a long-entrenched political clan – a point Defensor and his allies have bemoaned against in the past. In Defensor’s Malayang Quezon City lineup, however, members of local political clans also abound.

The two, despite 2022 being their first head-to-head race, have been on opposing sides in the past. Defensor ran against former mayor Herbert Bautista in 2016, when Belmonte was still gunning for reelection as Bautista’s vice mayor. In 2019, Belmonte’s bid for city hall was challenged by Bingbong Crisologo, who is now running to be the city’s 6th District representative under Defensor’s slate.

While Defensor is Marcos’ choice, Belmonte has reportedly been endorsed by PDP-Laban, the ruling party which, in turn, has endorsed Marcos for president.

Belmonte has not yet endorsed a presidential bet but has endorsed Senate President Tito Sotto, the father of incumbent Quezon City Vice Mayor Gian Sotto, for vice president. The younger Sotto is seeking reelection alongside Belmonte.

Quezon City has over 140 barangays divided into six districts. – Rappler.com