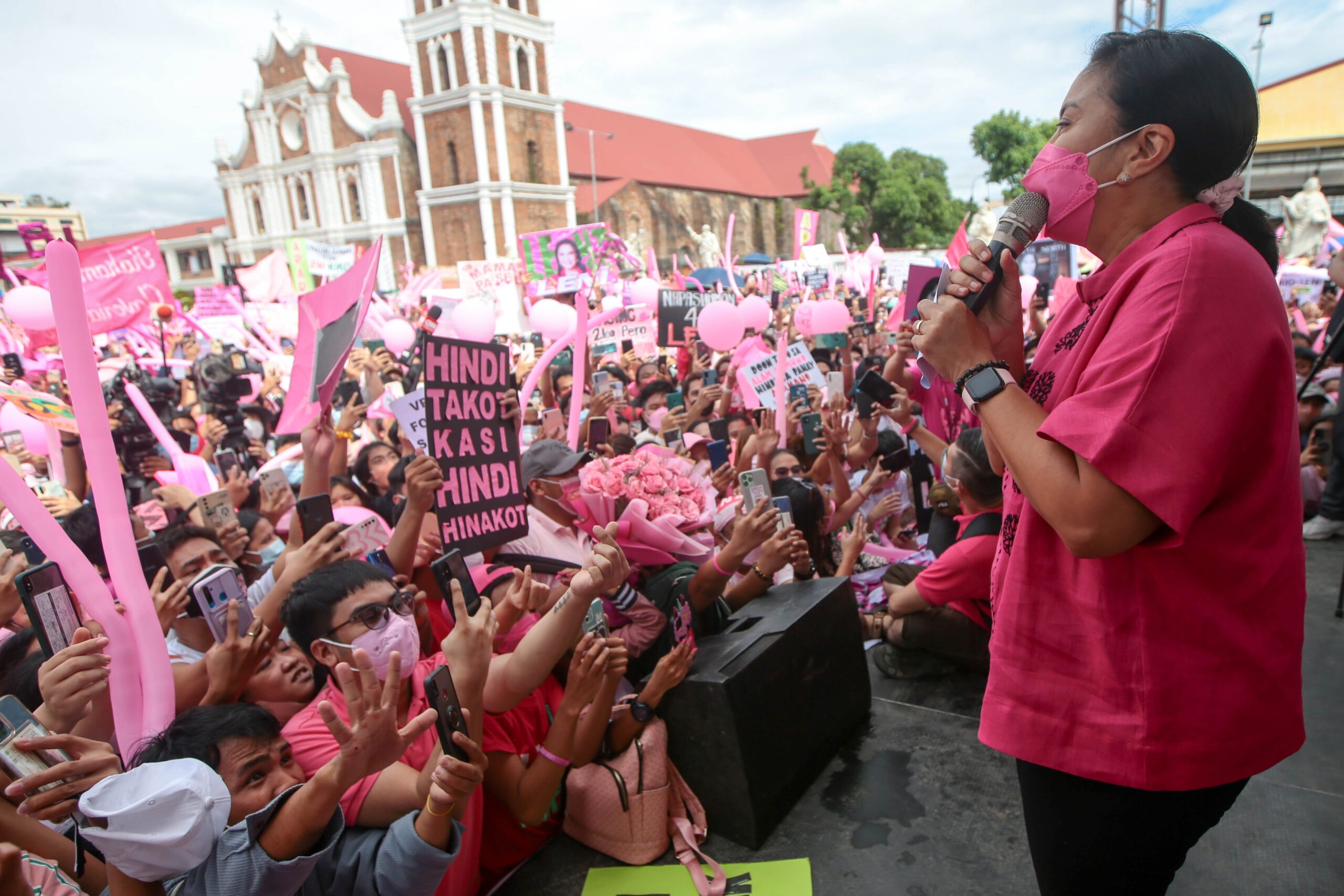 Facebook Twitter Copy URL
Copied
(1st UPDATE) In Cagayan and Isabela, supporters of Vice President Leni Robredo and Senator Kiko Pangilinan come out to assure them that 'there is no Solid North'

LAOAG CITY, Ilocos Norte – In the first hour of Saturday, March 12, Reyn Niduaza prepared for her four-hour trip with 57 other supporters of presidential candidate and Vice President Leni Robredo from the northern towns of Sanchez Mira and Claveria to Tuguegarao City in Cagayan.

“It will all be worth it, ‘yung puyat, ‘yung pagod (the sleep deprivation, the exhaustion),” Niduaza told Rappler.

It would be her first time to join an election rally for Robredo and her Angat Buhay Lahat slate.

On Saturday, Robredo barnstormed Cagayan and Isabela. It was Robredo’s first foray into the so-called “Solid North,” the bailiwick of her rival, Ferdinand “Bongbong” Marcos Jr.

Niduaza remained unfazed as the turnout in Tuguegarao City on Saturday showed a fissure in northern Luzon provinces. Robredo setting foot in Cagayan and Isabela is already an indication that she is “a strong woman” who has proven that she has a lot to offer, Niduaza said.

“I see this effort of her coming to our province as being strong. Kasi kapag sinasabi na babae ka (Because they say you are a woman) and you are running for office, chances are, you are seen as a weak candidate. But she always reaches out,” Niduaza said.

Niduaza said that Robredo’s political rally in Cagayan was an opportunity for residents to take a stand. “It was an opportunity to meet other volunteers kasi I know na dito ko mafe-feel ‘yung (because I know that here, I can feel) patriotism and nationalism. That more than exercising our right to vote, nararamdaman ko ‘yung volunteer spirit, na ang tao ay may gusto talagang ipaglaban (I can feel the volunteer spirit, that the people are really fighting for someting),” she said.

In a sea of placards and “finger hearts” which had become a symbol for Robredo’s campaign, an emboldened “Awan Solid North!” (There is no Solid North) placard stood out in Tuguegarao. In Alcala town, supporters chanted “Walang Solid North!” and promised to deliver for Robredo in the May elections.

The Solid North is popularly known in the country as an “electoral phenomenon” – the bloc voting behavior of provinces in Ilocos Region and Cagayan Valley in support of the late dictator Ferdinand Marcos who ruled the Philippines for over 20 years before he was ousted through the 1986 EDSA People Power Revolution in 1986. This is according to Professor Reidan Pawilen of the University of the Philippines Los Baños in his paper which examined the Solid North narrative. (The Solid North myth: An Investigation on the Status of dissent and human rights during the Marcos Regime in Regions 1 and 2, 1969-1986)

Pawilen, citing author Carl Lande, noted the huge influence of regionalism and the tendency to vote for local elites and personalities as mirrored in the provinces in the Solid North. He said that the “imagine veiled” of the Solid North had served as a “political function and became a propaganda that blanketed the massive electoral frauds during [Marcos Sr.’s] term.”

It projected a rather positive image of Ilocanos having a relatively better life under the Marcos regime but a collection of accounts, Pawilen said, showed that northern provinces were not spared from hardships during the dictatorial rule of Marcos.

During the Marcos regime, there was also a “growing sense of discontent among the Ilocanos” as the country’s economy plunged to unprecedented lows in the 1980 and that northern Luzon was not spared by its effects, said Pawilen. This would be reflected in the election results wherein Marcos Sr. would lose in “five provinces in the North for the first time [in 1986 snap election] after dominating in the area for the previous presidential elections,” the paper said.

The Solid North “myth” was seemingly reflected in the presence of Robredo supporters in Tuguegarao, rain or shine, on Saturday. Niduaza said her participation in the rally is in response to the “call” to vote not just because of ethnic ties, but based on the character and well-placed platforms of the candidates.

“Even if you are in Cagayan, may ibang choice ka pa din kung sino ang iboboto. Hindi lang dahil sa kalugaran mo (you still have a different choice of candidate. It’s not just based on where you’re from). We should be open minded,” she said.

Tuguegarao Councilor Marj Poblete Martin said it is surprising that a “movement” of supporters had been organizing for Robredo in their city, one that they “did not definitely see in 2016.”

(In 2016, VP Leni ran under the administration banner, and her support group then was clearly not there. But now, her support group is formed by volunteers. This is the first time we are seeing this morning; it wasn’t like this in 2016.)

Martin counts herself as one of the vocal supporters of Robredo in Cagayan whose political elites, including the Enriles and Mambas, are backing Marcos Jr.

It is a “matter of principle,” said Martin, who is also a lawyer. “We want to show the people here that they have a better choice for president and who is worthy of being voted for,” she added, as she noted that Cagayan is still largely a Marcos bailiwick.

“Dito sa atin, kung tumayo ka for [Marcos Jr.], may added votes ka, and if tumayo ka para kay Leni, bawas ang boto mo. Tanggap ko naman ‘yun, kasi no other candidate had shown me other than VP Leni that you can help and inspire despite everything,” said Martin, who is running for reelection.

(Here, if you stand with [Marcos Jr.], you have added votes, and if you stand with Leni, you have less votes. I’ve come to terms with that, because no other candidate had shown me other than VP Leni that you can help and inspire despite everything.)

Martin said that they did not feel “pressured” at all, even with Robredo coming from campaign rally in Bacolod attended by over 70,000 people just the other day, on Friday, March 11, the highest turnout so far during the campaign period.

Around 8,000 supporters of Robredo showed up in Tuguegarao alone, Martin said. Despite this, Martin said that it matters that Tuguegarao will give Robredo a  “good fight”  in the 2022 elections, vowing to deliver at least 30,000 votes for her in the capital city.

A lot is at stake in the coming polls, Martin said, and this is an opportunity for the voting bloc to vote based on their “conscience” and an “opportunity na hindi lang bumuto dahil kalugaran mo, kapareho mo ng dialect (for yout to vote not just because of your area, for someone who shares your dialect).”

“This is an opportunity for you to expand your choices at the end of the day,” she said.

The challenge now in Cagayan, Martin said, is how to reach out and talk to people to help convert votes for Robredo because at this point, they already know among who in “intermingled volunteer groups” will vote for her and her team.

Robredo also held a People’s Rally in Alcala town, a small town with at least 40,000 residents. The town’s mayor, lawyer Tin Antonio is a vocal Robredo supporter. Even Antonio’s vice mayor, Joy Duruin, is endorsing Robredo, a rare feat in northern Luzon provinces where a majority of local officials are pro-Marcos.

Antonio, in a rousing speech, said that the people in her town remember that Robredo was the first to respond at the height of Typhoon Ulysses which inundated at least 24 out of 25 villages in 15 meters of flood waters.

“Hindi natin alam kung kanino tayo magpapasaklolo…In the middle of the night, timmawag ni VP Leni, nagpadala ti tulong (We didn’t know who to call to ask for help…. In the middle of the night, VP Leni called and sent aid)…. Saankadi nga inparikna na kadatayo ti panagayat. Dayta kadi ti ekstranghero ditoy? Dayta ti ganganaet a kas kunada (Had she not made us feel that we are loved. Is that what they call a stranger)?” Antonio said.

“Ditoy Alcala, ti ayat masubadan ti ayat, ket ngarud awaten tay isuna. Ilukat tayo ti panagpuspuso tayo, denggen tayo isuna (In Alcala, love begets love this is why I ask that we welcome her, open our hearts and we listen to her),” she said.

In her speech, Robredo admitted that she was “nervous” that no one might welcome her and her slate in Cagayan. “Alam ko naman ‘yung situation at alam ko na mahirap para sa inyong lahat na kumampanya ng ibang kandidato, pero bilib ako sa inyo na naglakas kayo ng loob,” she said to the fired up crowd in Alcala.

(I know the situation and I know it is difficult for all of you to campaign for a different candidate and I am in awe of your courage.)

Robredo said that seeing the crowd that showed up for her in Tuguegarao and Alcala was a “big development” because it was an indication that voters, particularly the youth, are looking at the qualifications and track record of the candidates.

Although she lost by a landslide to Marcos Jr. in Cagayan in 2016, Robredo said that politics will not hinder her to serve the people, citing how her teams had always been the first to show up every time disasters struck the province in the past years. 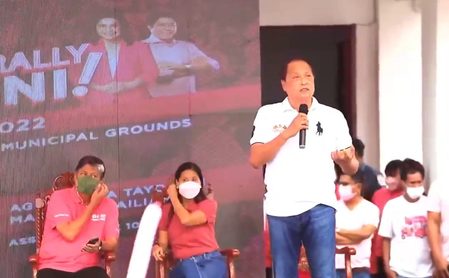 She vowed to Cagayan residents that when elected as president, she will not look at political alliances and the places where she would lose when serving the people.

From Cagayan, the Robredo-Pangilinan tandem and their slate headed to Isabela for a string of activities, including a visit to the Santiago City Volunteer Center, where her supporters continued to assure her, “Walang Solid North (There’s no Solid North)!” Some also held up placards saying, “Kami ang resibo na walang Solid North (We are proof that there is no Solid North).”

This “proof” was also evident in the crowds who lined the streets to wait for her and cheer her on.

– With reports from Vincent Verzola/Rappler.com