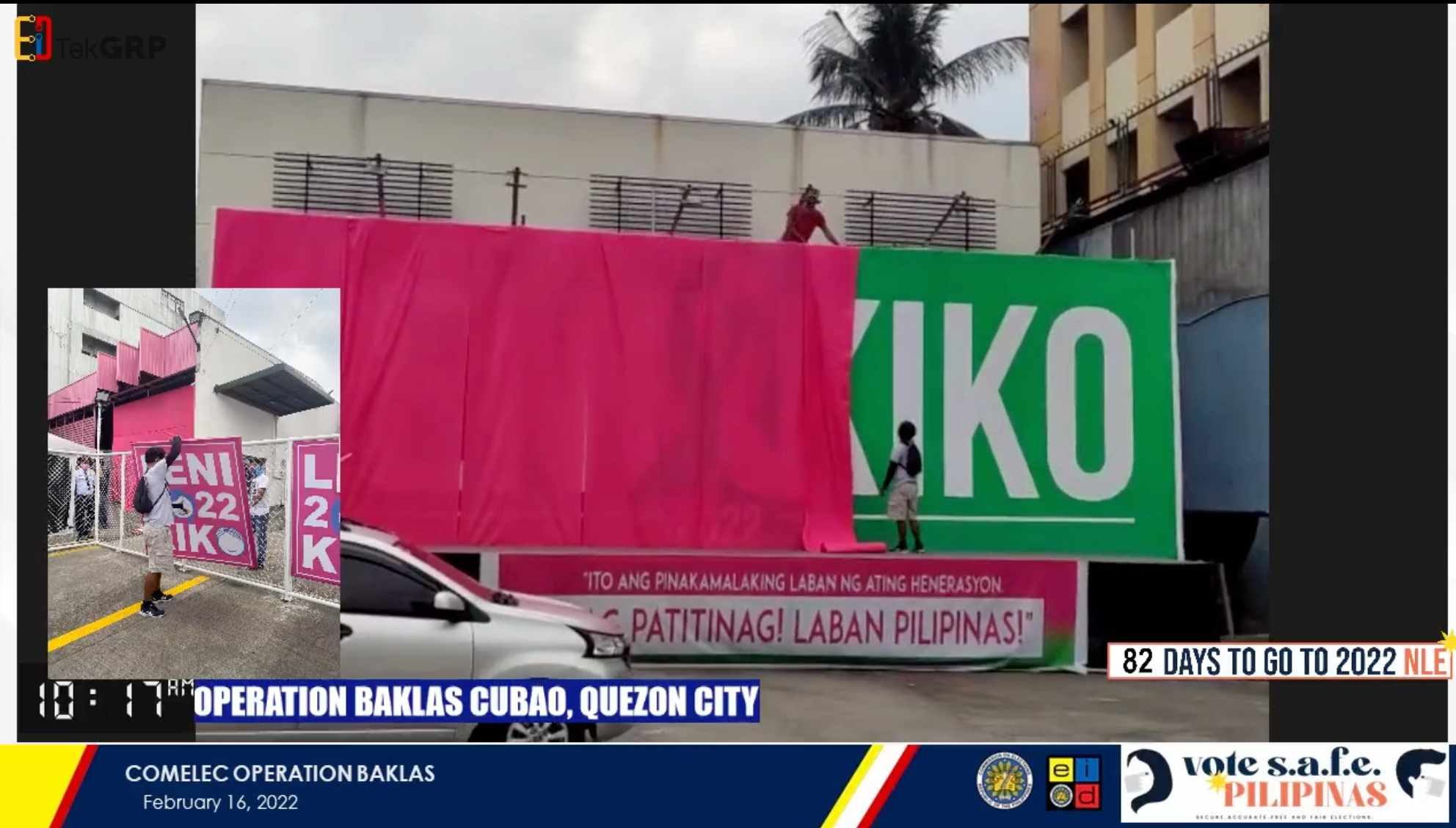 TAKEDOWN. Comelec's livestream on Facebook shows its personnel covering up a huge tarpaulin of presidential candidate and Vice President Leni Robredo and her running mate Senator Kiko Pangilinan that was displayed at their media center in Quezon City on February 16, 2022.

MANILA, Philippines – The camp of presidential bet and Vice President Leni Robredo told the Commission on Elections (Comelec) to respect the freedom of private citizens to support candidates amid another takedown of Robredo tarpaulins.

In a statement on Wednesday, February 16, Robredo’s spokesperson Barry Gutierrez told the poll body that posters and tarpaulins put up by Filipinos within their private property are protected under the freedom of speech clause in the 1987 Constitution.

“Posters put up by private persons on private property are protected by the Constitutional right to freedom of speech. Even Comelec resolution 10730 limits any removals only to materials produced by candidates or parties. This right of private citizens must be respected,” said Gutierrez.

Gutierrez issued the statement after Comelec personnel took down campaign paraphernalia of Robredo and her running mate, Senator Kiko Pangilinan, that were displayed at their media center along EDSA in Quezon City.

The facility, which used to be a bus station, is a privately owned compound by a Robredo-Pangilinan supporter who agreed to convert the area into a campaign headquarters, where reporters covering the tandem can work and cover campaign activities.

The tarpaulin takedown was part of Comelec’s Oplan Baklas operations in Quezon City, the country’s most vote-rich city where 1.4 million votes are up for grabs in the May elections.

Sought for comment, Marcos’ spokesperson Vic Rodriguez told Rappler the poll body was “merely doing its job.” He said their camp is also not sure if the said billboard was done by one of their supporters.

“Nonetheless, Comelec was merely doing its job and we commend them for doing so provided they recognize the right of every individual’s freedom of expression whenever the postings are done on a private property and/or ownership,” said Rodriguez.

Comelec Resolution No. 10730 sets rules on what is considered to be lawful election propaganda, citing specific measurements and areas for posting for campaign paraphernalia to be considered legal.

The resolution considers the following as lawful election propaganda:

These streamers may be displayed five days before the candidate’s rally and should be removed within 24 hours after the event.

The same section allows candidates’ lawful election materials to be displayed at their headquarters, but banners and streamers sized two feet by three feet or larger are prohibited.

This policy is refuted by election lawyer Emil Marañon, however. He argued in a Rappler opinion piece if the costs for a campaign posters was fully shouldered by a private person and “without collusion with any candidate,” then the private person is not covered by the Comelec’s size limitation.

This is not the first time that the Comelec dismantled campaign materials of the Robredo-Pangilinan tandem that was put up in their headquarters across the country.

Two hours after Gutierrez released his statement, Robredo supporter Danny Pintacasi shared a video on his Facebook page showing police and fire department personnel removing posters of  the opposition tandem at their headquarters in Santiago City in Isabela.

Isabela is part of the so-called “Solid North” provinces, where votes are commanded by the family of Robredo’s bitter rival and current poll front runner Marcos.

“Santiago City, Isabela HQ of Team RObredo PAngilinan (TROPA) is located in a private property. The police and fire department personnel are the ones removing the tarpaulins and not the Comelec,” Pintacasi said on his post.

Lawyers and campaign volunteers for Robredo in Zamboanga City also wrote a demand letter against the Comelec on February 11 for taking down posters and tarpaulins in at least six properties “in one fell swoop” without giving them notice.

They challenged the poll body to show them a law that allows its agents to take down and seize election materials in private properties.

Veteran election lawyer Romulo Macalintal echoed the same sentiments, arguing campaign materials in private properties – even those not following the allowed sizes – cannot just be taken down by Comelec if property owners gave their consent.

(It is wrong and it violates the Constitution when the Comelec just removes these campaign materials without hearing the side of those who put up these posters.)

He cited the Timbol vs. Comelec case in the Supreme Court, where the justices ruled the poll body’s motu proprio powers can only take effect when affected parties have been given a chance to air their sides in a hearing.

Macalintal led Robredo’s legal team that won the election case filed against her by Marcos in the aftermath of the 2016 vice presidential contest.

Sought for comment on Macalintal’s statement, Comelec spokesperson James Jimenez said those who have a problem with Oplan Baklas should formally file a complaint against the poll body.

“I will recommend to anyone who has a problem with what we are doing to file a complaint about what we are doing. In the meantime, we are taking steps to ensure that our laws are complied with,” Jimenez said in a press conference. – Rappler.com