Robredo in ‘exploratory’ talks with Pacquiao camp on 2022 elections Vice President Leni Robredo confirmed on Tuesday, August 10, that she is engaged in “exploratory” talks with Senator Manny Pacquiao in relation to the 2022 elections.

Robredo said in an interview with CNN Philippines’ The Source that she had been in talks with the Pacquiao camp “twice,” and that their discussions will resume once the senator returns from the US where he is set to have a boxing match on August 21.

Robredo clarified that the discussions, just like her talks with other political camps, have been purely exploratory.

(For me, it is more exploratory in nature. There’s nothing much yet – we were just talking about our sense about the elections, what are our stand about this.)

Pacquiao was the president of the ruling PDP-Laban but was effectively ousted during the party assembly on July 17, when the faction of Energy Secretary Al Cusi declared all leadership positions in the party as vacant, in preparation for the 2022 elecions. Cusi was elected to take over Pacquiao’s post.

Robredo, the face of the once-ruling Liberal Party (LP), explained why she is doing exploratory talks with other camps despite their differences.

(I don’t know if ‘pragmatic’ is the right term, but for me, what I believe in is that we should broaden the base. It’s true that we have a lot of differences.)

“But the reason why the exploratory talks are happening is because we want to see if we would have common grounds that we could agree on,” she added.

Robredo said that she has “reached out to almost everyone already” but clarified that this does not mean things are already cast in stone, particularly on who to support.

(There has been no discussions on who to support. What I’m looking at, in the meantime is, ‘Would you be willing to sit down and talk further?)

The Vice President did not disclose the other politicals camps that she had reached out to, saying that some may not be comfortable about being identified, for now.

Robredo reiterated that the 2022 presidential elections are important. And while she has yet to officially announce whether she is running for president or not, she said she feels a certain sense of duty to look for options.

“It’s not just the numbers. No,” Robredo said. “Others think it’s about my personal convenience. I’m way past that. No.”

“For me, it’s more of a sense of duty. But having said that, I know that the 2022 election is a very important election.… I repeatedly said this, that I don’t think the country can last another six years with this kind of governance because we’re in the middle of a pandemic,” she said in a mix of English and Filipino.

Robredo has given herself until October 8 – the first day of the filing of the certificate of candidacy – to decide on her 2022 bid.

Robredo’s coalition talks with other candidates was frowned upon by another 1Sambayan nominee, ex-senator Antonio Trillanes IV. He believes Robredo is the only logical opposition standard-bearer.

But other key opposition figures, like LP vice chairman and Senate Minority Leader Franklin Drilon as well as former Ombudsman Conchita Carpio Morales, an 1Sambayan co-convenor, are backing the Vice President’s political strategy, noting the need for a broad coalition to boost the opposition’s chances of winning in 2022. 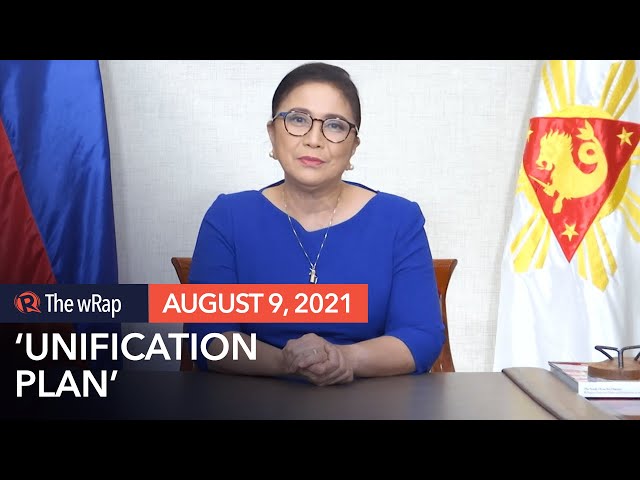