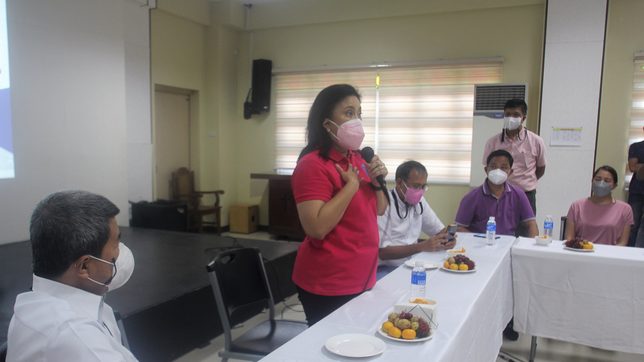 FIGHTING FAKE NEWS. Vice President Leni Robredo holds a dialogue with members of the clergy of the Diocese of Legazpi led by Bishop Joel 'Bong' Baylon on October 28, 2021.

Facebook Twitter Copy URL
Copied
'I'm not worried about funds and machinery because we have volunteers who don't need to be paid. Our problem is how to fight fake news,' the presidential aspirant tells church officials in Legazpi City

Leni Robredo has been fighting fake news since she stepped on the national stage as a vice presidential aspirant in 2015. The attacks have been kicked into high gear when she joined the presidential race, so she has sought the help of the most unlikely institution in her battle against online disinformation: the Catholic Church.

“I’m not worried about funds and machinery because we have volunteers who don’t need to be paid. Our problem is how to fight fake news,” Robredo told church officials led by Bishop Joel “Bong” Baylon during her visit to Legazpi City on Thursday, October 28.

She said during the dialogue that such disinformation can be spotted across social media platforms, such as YouTube, TikTok, and Facebook.

“Our only hope is the Church. The Marcoses have solid infrastructure that can easily penetrate social media with fake news,” she said.

Baylon assured Robredo that he would help her through prayers and that parish volunteers would also educate the public to select the right candidate.

Robredo visited Albay and Sorsogon for various events organized by her volunteers. She first visited Tabaco City, where there was a caravan from Barangay Buang heading to downtown and Tabaco seaport, joined by her volunteers from all walks of life.

A fleet of motorized boats later escorted the Vice President to Barangay Angas in San Miguel Island. Tabaco City Mayor Krisel Lagman Luistro was with her.

At San Miguel Island, she visited the Lambaklad Angas Small Fishermen Association, a beneficiary of the Office of the Vice President’s Angat Buhay poverty alleviation program.

From San Miguel Island, Robredo proceeded to Barangay Mapulang Daga in Cagraray Island, where she met with the Mapulang Daga Fisherfolk and Weavers Association (MAFWA). She turned over fish cages to fisherfolk.