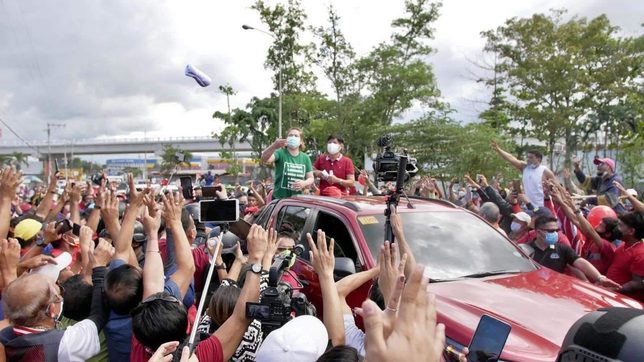 'UNITEAM.' File photo of Sara Duterte and Bongbong Marcos in a previous sortie in Tagum City.

Facebook Twitter Copy URL
Copied
The Davao City mayor begins making the rounds as a VP aspirant, telling voters that their support for her should also extend to Bongbong Marcos

Her father did not win in Misamis Occidental in the 2016 presidential elections. And neither did Ferdinand “Bongbong” Marcos Jr, who ran for vice president in the same elections but lost.

On Friday, November, 26, vice presidential aspirant Sara Duterte asked the province to turn the situation around in May 2022 – and give her and presidential bet Bongbong Marcos a win.

(We need Mindanao to hold the line for our tandem. Metro Manila and its nearby areas are contested spots. I’m usually shy to ask support for myself but it’s easy for me to ask your support in behalf of my allies.)

Sara Duterte was joined by top provincial officials in the gathering.

The eldest daughter of the first Mindanaoan president, Rodrigo Duterte, made a pitch for Partido Federal ng Pilipinas (PFP) standard-bearer Marcos. Similar to a speech she made in Tagum City during their first outing as a tandem, the younger Duterte vouched for Marcos’ experience in politics, which she said was more vast than hers.

Mindanao is a must-get for Marcos, especially since latest surveys show he’s not doing too well in the region.

In the last Pulse Asia presidential preference survey held in early September 2021, Sara Duterte was the overwhelming choice of Mindanao voters (47%) and the top choice in the Visayas (23%, with Senator Manny Pacquiao at 21%).

In contrast, Marcos registered the lowest numbers in Mindanao – only 8% of respondents there said they would pick him for president.

In Misamis Occidental where Duterte campaigned on Friday, Marcos was in fact clobbered by Vice President Leni Robredo in the 2016 vice presidential race. Robredo won by a landslide in that election, getting more than 135,000 votes over Marcos’ 35,000 or so votes.

President Duterte didn’t win in Misamis Occidental in 2016 either, although he did better than Marcos and kept it closer to the province’s choice for president at the time, Mar Roxas. Roxas got 129,000 votes compared to Duterte’s 109,000 votes in the province.

Governor Philip Tan, who won as a Nacionalista Party candidate in 2019, admitted as much in a speech.  Sara expressed hopes it would be different outcome for the province come 2022.

How to convert voters?

(We ask all of you, how do you convert voters? Of course, you campaign. But on election day, please go out and vote for Bongbong and Sara.)

(I’ll have a hard time if I work with someone and I say ‘sir, this is the problem, this was what we can do,’ and they answer with ‘hold on, I don’t know what to do so I need to think about this.’ A president cannot be that way.)

Critics have pointed out, however, that Marcos has little to show in over three decades of holding public office. Marcos, the son and namesake of the late dictator Ferdinand Marcos, first entered politics in his early 20s when his father was still president. He has since been elected vice governor, governor, district representative, and senator.

Duterte later made the same pitch for Marcos in Cebu City, where she was the guest at a League of Municipalities of the Philippines gathering. In front of municipal mayors from the Visayas region, she said that with Marcos as president she would be able to serve the Duterte way as vice president.

On November 25, Duterte’s Lakas-CMD and Davao-based Hugpong ng Pagbabago sealed an alliance with PFP and Pwersa ng Masang Pilipino (PMP). The “Uniteam Alliance” is a coalition that includes former presidents and their scions – Lakas-CMD, which Sara also chairs, counts former president Gloria Macapagal-Arroyo as its president emeritus while PMP is a party founded by ousted president Joseph “Erap” Estrada. – Rappler.com