SECURITY FOR LASCO’S FAMILY: Senate President Vicente C. Sotto III assures the family of Ricardo "Jon Jon" Lasco Jr., one of the 34 missing persons involved in sabong and e-sabong (online cockfighting), that the Senate will provide them security for as long as the case is not resolved. During the hybrid hearing of the Committee on Public Order and Dangerous Drugs Monday, March 21, 2022, Sotto ordered the Senate Sergeant-at-Arms to provide security to Lasco’s family. Princess Lasco, through the questioning of Sotto, informed the committee that her husband appeared restless and has told her that he will clear his name before he was taken away by armed men inside their house in San Pablo, Laguna on August 30, 2021. (Voltaire Domingo/ Senate PRIB)

Facebook Twitter Copy URL
Copied
Senate President Vicente Sotto III says that lawmakers are constrained by the 1987 Constitution to stick to their scheduled dates for vote canvassing. The 18th Congress will adjourn sine die on June 3. 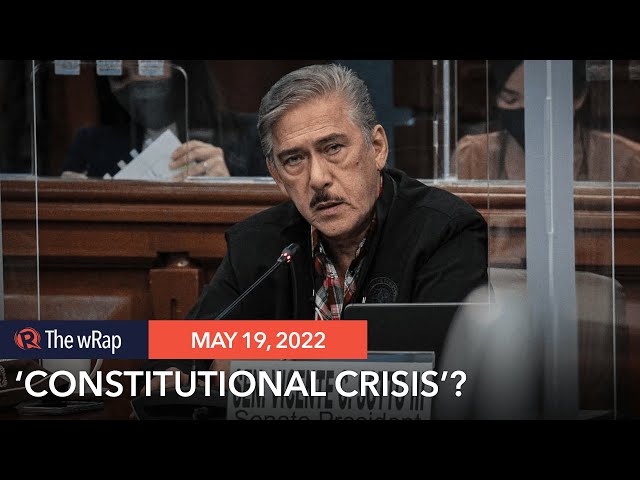 The veteran lawmaker issued the warning on Thursday, May 19, when asked by reporters to comment on the two petitions elevated to the SC seeking to disqualify Marcos from the 2022 presidential race and to cancel his candidacy, respectively. The petitions are seen as last-ditch efforts of the Marcoses’ critics to block their return to Malacañang.

Both petitions want the SC magistrates to issue a temporary restraining order on the Senate and the House of Representatives’ scheduled canvassing of votes for president and vice president on Tuesday, May 24.

Sotto disagreed, saying: “If that happens, we will be courting a constitutional crisis from the fact that Congress can no longer meet after June 3rd. Who will then conduct the canvass as mandated by the Constitution?”

On June 3, the 18th Congress will adjourn sine die, meaning its last day of session under President Rodrigo Duterte’s term. When lawmakers meet again on July 25, it will be already under the next 19th Congress under the Marcos presidency.

Sotto ran for vice president in the May polls, but he conceded to the winner, Marcos’ running mate Davao City Mayor Sara Duterte, daughter of the President. Sotto finished third in the race, after Duterte and second placer Senator Kiko Pangilinan.

Sotto also argued that lawmakers are constrained by the 1987 Constitution to stick to their scheduled dates for vote canvassing. Under the Constitution, the six-year term of the president and vice president ends at noon on June 30, and their successors take over then.

The Constitution also states that the next president should hold his State of the Nation Address on the fourth Monday of July, which this year falls on July 25.

“July 25 is a key date for Congress. So, no president or VP by June 30? What do they propose? Holdover? Tell me if that is not a crisis!” said Sotto.

Senate Minority Leader Frank Drilon, a stalwart of the opposition’s Liberal Party (LP), also believes the cases against Marcos would not prosper at the High Court.

“The petitions will not prosper. The Supreme Court cannot restrain or stop the Congress, acting as the National Board of Canvassers, from performing its constitutional duty of canvassing the votes for president and vice president of the Republic, and proclaiming the winner,” Drilon told reporters.

Drilon had played a key role in the presidential campaign of Vice President Leni Robredo, chairperson of the once-ruling LP but who chose to run as independent. She was a distant second in the presidential race topped by Marcos, who was the clear winner with over 31 million votes in the partial, unofficial vote count compared to Robredo’s 14.8 million votes. – Rappler.com