The Senate and the House of Representatives led by Senate President Vicente Sotto III and Speaker Lord Allan Velasco, on May 24, 2022, convened as National Board of Canvassers that will count the votes cast in the May 9 national elections and proclaim the President-elect and Vice President-elect. 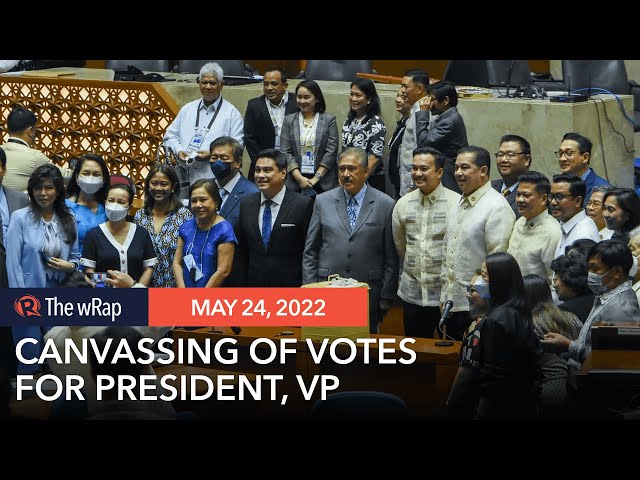 MANILA, Philippines – The 18th Congress convened in a joint session on Tuesday, May 24, to canvass the votes for president and vice president in the 2022 national elections.

Since the Philippines switched to automated elections in 2010, winning candidates are already known by the general public within days – even hours – after voting precincts close.

But the winners of the presidential and vice presidential races can only be proclaimed after the votes have been canvassed or counted and counterchecked by Congress. This is stipulated under Section 4, Article VII of the 1987 Constitution.

It is also Congress that will proclaim the country’s next president and vice president. 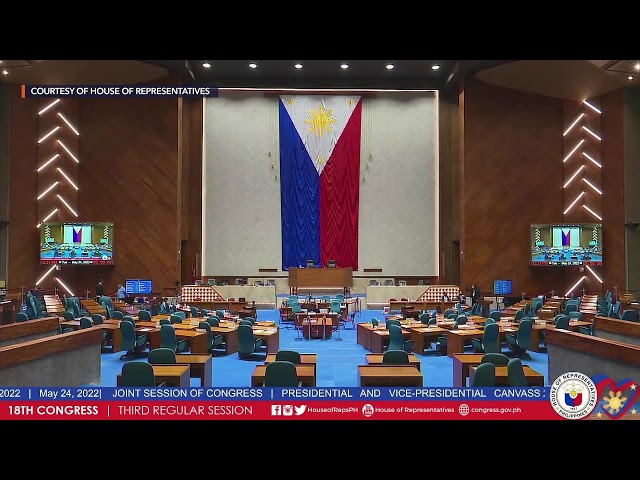 Ferdinand “Bongbong” Marcos Jr. is already considered the presumptive president, as partial, unofficial results from the Commission on Elections’ Transparency Server already showed he has garnered over 31.1 million votes with 98.35% precincts reporting results.

His running mate Davao City Mayor Sara Duterte is the presumptive vice president, with over 31.5 million votes based on partial, unofficial results.

The Marcos-Duterte tandem’s closest opponents are the opposition’s presidential candidate Vice President Leni Robredo, who got over 14.8 million votes, and her running mate Senator Kiko Pangilinan, with more than 9.2 million votes.

Congress is aiming to finish canvassing the votes from 173 certificates of canvass (COCs) and proclaim the country’s next president and vice president by Wednesday, May 25.

How are the votes going to be canvassed? Who are the key players? And what happens when lawmakers find discrepancies? Here’s everything you need to know:

The House of Representatives and the Senate convened in a joint session at 10 am on Tuesday to formally create the canvassing committee. Both chambers separately approved the canvassing rules as well.

A joint committee was then created to canvass the votes, with seven members each from the Senate and the House. Both chambers have four alternates each, who can participate in the proceedings in case the other members are unable to do so.

Among the members of this panel are known allies or relatives of Marcos. His sister Imee Marcos is part of the Senate contingent, while his cousin House Majority Leader Martin Romualdez co-chairs the panel. Romualdez is also poised to become the next House speaker under the next 19th Congress.

Senate Majority Leader Juan “Migz” Zubiri, who co-chairs the panel, sought reelection under Marcos’ ticket and publicly endorsed the presumptive president during the 2022 campaign. Zubiri is now among the top contenders for Senate president.

The complete list members of the canvassing committee are as follows:

Under the rules, each of the candidates are entitled to bring their legal team to the Batasan, but only two lawyers at a time can sit inside the plenary hall. In case a candidate’s camp wants to raise an issue, only one lawyer may speak to the joint committee for not more than three minutes.

Marcos’ lead counsel is his longtime spokesperson and chief-of-staff Vic Rodriguez, whom the presumptive president has picked to be his executive secretary.

Duterte will be represented by the legal team of her party, Lakas-CMD, said her spokesperson Christina Garcia-Frasco. This includes election lawyer Maria Bernadette Sardillo, who previously represented Robredo in the election case Marcos had filed against her after the 2016 vice-presidential contest. Robredo won this case in the Supreme Court.

Marcos listed Sardillo among his lawyers for the canvassing in his letter to House Secretary-General Mark Lleandro Mendoza. But Sardillo later clarified with Rappler that she does not have any engagements with Marcos.

Robredo’s legal team will be led by veteran election lawyer Romulo Macalintal, the lead lawyer who defended her in Marcos’ election case in 2016.

Her running mate Pangilinan will be represented by the Britanico Sarmiento & Ringler Law Office.

At 1:50 pm on Tuesday, it was announced that Marcos will be represented in the plenary by Rodriguez and Egargo, while Duterte will be handled by Sardillo and Firme.

Robredo’s lawyers who were physically present in the plenary hall were Reagan de Guzman and Jasmin Banal. Her running mate Pangilinan was represented by lawyer Renzo Ross Sarte.

Presidential candidate Senator Manny Pacquiao’s lawyers are Nikki de Vega and Lutgardo Barbo, former Senate secretary who ran but failed for senator in the May polls.

Robredo’s lead lawyer Macalintal and Moreno’s legal counsel Lumbera later made separate manifestations saying they are no longer making any objections to the canvassing of COCs, recognizing the integrity of the 2022 elections and in effect throwing in the towel for their respective clients.

The joint session of Congress was suspended before mid-morning on Tuesday to allow the opening of each ballot box containing the COCs. Senate Secretary Myra Villarica and House Secretary General Mark Lleandro Mendoza were tasked to check that all documents and election paraphernalia concerned are present.

Lawmakers must ensure the number of votes cast for each presidential and vice presidential candidate in the electronically transmitted COCs are identical with the physically delivered COCs.

Certain requirements must also be present, including the signatures and thumb marks of the PBOC and CBOC chairperson and members on the COC. The electronically transmitted COC must also contain the names of all candidates for president and vice president, as well as their corresponding votes in figures and or words.

A similar process is applied to counterchecking the votes cast via oversease absentee voting (OAV), local absentee voting, detainee voting, and the 63 barangays in North Cotabato that are part of the Bangasamoro Autonomous Region in Muslim Mindanao.

If there are any discrepancies, the joint panel will defer canvassing that COC and require the PBoC or CBOC concerned to appear before it within 24 hours to explain the issue.

If a physical meeting is not possible, then the PBOC or CBOC concerned may explain to the joint committee in a form of communication deemed “safe and reliable” by the members.

The joint committee may also order the production, examination, and comparison of the compact discs and the secure digital cards from the vote counting machines, consolidation and canvassing system machine, audit logs, or printed or generated statement of votes.

What if COC was delayed, lost, destroyed, unavailable?

A ballot box containing a copy of the COC that has not been delivered to Congress during the opening of the COCs will be considered delayed. The joint committee will order the PBOC or CBOC concerned to deliver that ballot box within 24 hours.

If it happened to a ballot box for OAV votes, the SBOC of the country or territory concerned may be compelled to face the joint committee physically or virtually to explain the cause of the delay.

If the COC has been lost, destroyed, or is unavailable, the joint committee will “immediately” order the Comelec to submit its authentic copy of the COC within 24 hours.

Proclamation of next president, VP

Once the canvassing is done, the joint committee will prepare a report and submit it to the joint session of Congress.

Both the House and the Senate will then separately approve the joint committee report. A resolution will then be penned proclaiming the winners of the 2022 presidential and vice presidential races. The winning candidates will each go to the Speaker’s rostrum and will have their hands raised by the Senate President and Speaker. – Rappler.com