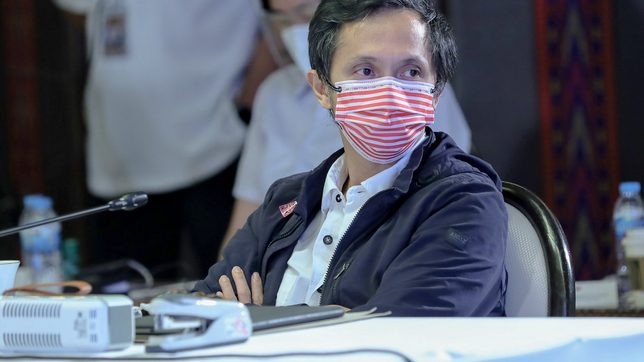 His other role in the team is “head of statistical research,” which puts him in charge of surveys and focus group discussions, Banayo said.

The day after Banayo’s remarks, Malacañang denied Dizon is with Moreno’s team.

“There is no truth to the reports circulating that Secretary Vivencio “Vince” Dizon allegedly joined the campaign team of a presidential aspirant,” said Cabinet Secretary and Acting Presidential Spokesman Karlo Nograles on Thursday.

He added that Dizon remains a member of Duterte’s Cabinet “as Presidential Adviser for COVID-19 response.”

“Secretary Dizon is focused on the vaccination efforts of government, and not with any political campaign,” said Nograles.

Banayo issued a statement later on Thursday saying Dizon has decided not to formally join the Moreno team yet in order to focus on the government’s pandemic response.

“We support his efforts even as we will welcome him in our team eventually,” said Banayo.

Dizon informed Duterte of his wish to join Moreno’s team back in October. He then resigned as Bases Conversion and Development Authority president and presidential adviser on flagship programs and projects then flew to the United States for a much-needed break.

However, Dizon continues to help with the Duterte administration’s pandemic response. He is doing this pro bono, said Banayo.

Rappler has sought comment from Dizon but is yet to receive a response as of writing.

There had been talk in some circles months before that Dizon had joined Moreno’s campaign team. However, Banayo had refused to confirm this then.

Like Banayo, Dizon was also involved in Duterte’s successful 2016 presidential bid. He was brought in by Taguig-Pateros Representative Alan Peter Cayetano, who was Duterte’s running mate then. Dizon was Cayetano’s political strategist.

In Duterte’s campaign, Dizon helped craft and organize the then-Davao mayor’s “messaging events.” These were small gatherings targeted to specific sectors – like tricycle drivers, urban poor families, and farmers – which Duterte’s campaign used to make up for a small budget.