The European Parliament on Thursday, September 17, approved a resolution urging the Philippine government to drop all charges against Rappler CEO and executive editor Maria Ressa, former researcher Reynaldo Santos Jr, and the news website’s other staff.

The resolution was adopted with 626 votes in favor, 7 against, and 52 abstentions.

In a statement, the EU Parliament said it is “alarmed about the deteriorating level of press freedom in the Philippines, and condemns all threats, harassment, intimidation, unfair prosecutions, and violence against journalists, including in the case of Maria Ressa.”

“All politically motivated charges against her and her colleagues should be dropped,” the EU Parliament said, citing the resolution.

In an email to Rappler, EU Parliament press officer Victor Almqvist confirmed that the resolution was adopted as a whole on Thursday.

The EU Parliament in its resolution noted the cyber libel conviction of Ressa and Santos. The lawmakers said the guilty verdict comes even as Ressa “has long been targeted for her criticism of the government’s ‘war on drugs’ and for Rappler’s critical reporting on extrajudicial killings.”

The complaint was filed in 2017 or 5 years after the cyber crime law was passed. It was well beyond the more typical one-year prescription period for libel.

In a speech hours before the voting, Hannah Neumann, member of the parliament, recalled her earlier conversation with Ressa.

“So I asked Maria: What can we do as members of the international community? And she said, ‘You know, Hannah, democracy dies in darkness so what you should do is shed light on the situation,'” Neumann said. 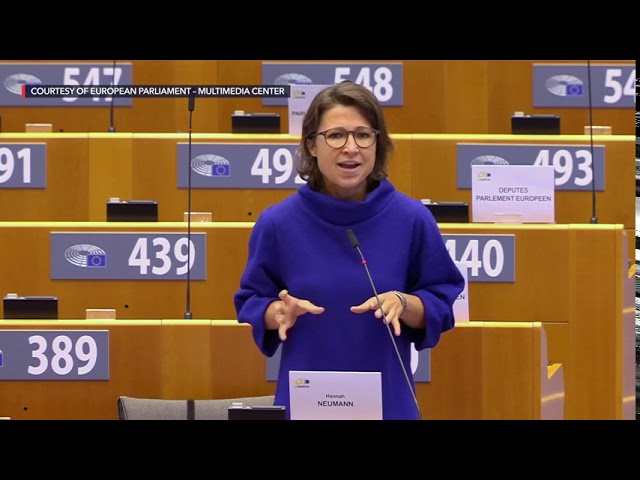 During the deliberations, Neumann also highlighted the need to withdraw the European Union’s financial assistance to the Duterte government following human rights abuses.

ABS-CBN, which drew the ire of Duterte, failed to secure a renewed license from the House of Representatives filled with the President’s allies.

The European Parliament also called on the Duterte administration to guarantee the physical and psychological integrity of all human rights defenders and journalists and to “ensure that they can carry out their work in an enabling environment and without fear of reprisals.”

This is in accordance with the UN Declaration on Human Rights Defenders, adopted by the General Assembly of the United Nations on December 9, 1998.

Members of the European Parliament’s (EP) Media Working Group earlier sent a letter to Duterte, calling for the dropping of charges against Ressa and Santos.

The European Union External Action Service and the United Nations independent expert on freedom of expression had also earlier condemned the conviction of Ressa and Santos.

Ressa, Rappler, and some of its directors and staff have faced at least 11 complaints and cases, mostly initiated by the government of Duterte. – Rappler.com