Presisdenrtial candidate Ferdinand Marcos Jr. at the steps of the Sorsogon City Provincial Capitol on March 4, 2022.

SORSOGON, Philippines – Presidential candidate Ferdinand “Bongbong” Marcos Jr, is now standing by Ukraine, a flip-flop from a statement he made three days ago that there was no need for the Philippines to take a stance in Russia’s invasion of its neighboring country.

In a statement sent to media Friday, March 4, Marcos said, “I stand united with the rest of the world for Russia to respect Ukraine’s freedom and its citizens’ democratic way of life.”

Russian leader Vladimir Putin ordered an invasion of Ukraine on February 24. Russia is now under investigation by both the International Criminal Court and United Nations Human Rights Council for possible war crimes and other violations. Asked by reporters on the sidelines of an event at a hotel in Pasay Tuesday, March 1, Marcos said the Philippines’ only stake in the issue was ensure the safety of Filipinos in Ukraine.

“I don’t think there is a need to take a stand. We are not involved except for our nationals,” he told reporters then.

In his Friday statement, Marcos this time said “I support the unconditional observance of human rights and fervently hope that there will be no more targeting of civilian communities and civilian establishments.”

His about-face on the issue messes with the logic of some of his supporters that neutrality is the way to go. Some even blasted Vice President Leni Robredo for siding with Ukraine.

While such commentary festered mainly on social media, a Marcos supporter who attended his rally in Sorsogon City on Friday had the same opinion. 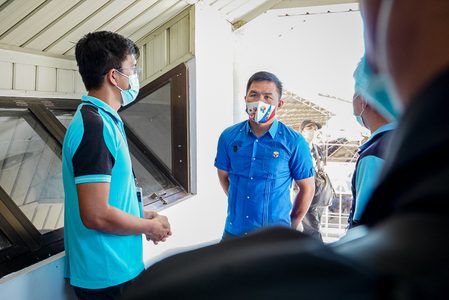 Ramir Regala Florese, who hails from Robredo’s home province of Camarines Sur, said the vice president’s pro-Ukraine stance was dangerous and would get us entangled in a war.

(She doesn’t have a good platform. Just on the Ukraine issue, we would be getting entangled in a war. We have to be neutral, be friends.)

It is not clear if Marcos supporters’ fear of taking a stand has something to do with Russia’s nuclear threats. But foreign policy experts have called out the flawed logic behind refusing to slam Moscow’s aggression, emphasizing it only served to fuel war.

Ukraine’s permanent representative to the UN, Sergiy Kyslytsya, had told countries considering abstaining to a UN General Assembly resolution it was a “mistake” to do so on the thinking “it is not my war.”

“It is a mistake. The evil will never stop. It requires more and more space to conquer. If tolerated it advances further and further,” Kyslytsya said. – With reports from Sofia Tomacruz/Rappler