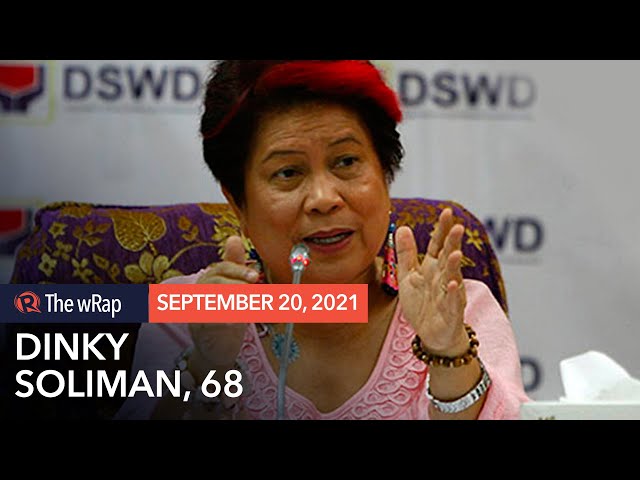 “We pray for the eternal repose of her soul,” said Soliman’s husband, public interest lawyer Hector Soliman. “We will share details of the wake later, and ask that the family be given some time and privacy for grieving.”

Soliman passed away at 7:32 am due to complications from renal and heart failure.

Soliman had contracted COVID-19 in August along with Hector and several other family members, but survived the disease.

In his piece for Rappler, “The day our house stood still: My COVID memoir,” Hector wrote that his wife, who had “many comorbidities,” was already confined in the hospital when she got the infection in mid-August.

Soliman was last seen in public during the wake of former president Benigno “Noynoy” Aquino III in June, and was among those who paid tribute to her former boss.

Soliman first headed the Department of Social Welfare and Development (DSWD) during the administration of Gloria Macapagal-Arroyo, but she later resigned, along with other Cabinet officials and heads of agencies collectively known as the “Hyatt 10,” when Arroyo was accused of fraud in the 2004 presidential elections or the “Hello, Garci” scandal, in July 2005. (READ: LOOK BACK: The ‘Hello, Garci’ scandal)

In 2010, Soliman returned as the DSWD secretary of then-president Aquino. She also headed the Human Development and Poverty Reduction Cabinet Cluster.

She steered the poverty alleviation program 4Ps, the Pantawid Pamilyang Pilipino Program, which was initiated by the Arroyo administration but was boosted and further institutionalized under Aquino. Soliman also helped lead massive rehabilitation efforts in the aftermath of Super Typhoon Yolanda (Haiyan) that devastated Eastern Visayas.

On June 29, 2016, a day before the Aquino administration was replaced by the Duterte administration, Soliman said in an interview with Rappler, “If there is one good thing that we can turn over to the new administration, it is evidence-based policy making, planning, and evaluation.”

At the time, she was referring to a study showing that the 4Ps helped perk up local economies. (WATCH: It’s a wrap: Dinky Soliman’s report card at DSWD)

Soliman, who hailed from Tarlac, obtained her bachelor’s degree in social work from the University of the Philippines Diliman, and her master’s degree in public administration at the Kennedy School of Government at Harvard University.

She spent decades in social work and activism, and worked with various nongovernmental organizations that assisted poor communities.

She is survived by Hector, their children Sandino and Marikit and their spouses, and their three grandchildren: Tala, Gujan, and Gianluca. – Rappler.com