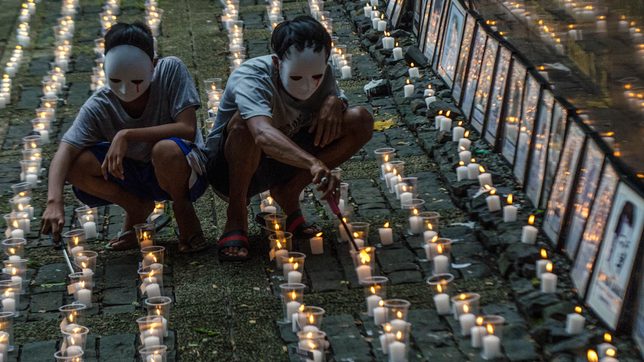 Facebook Twitter Copy URL
Copied
‘The situation we are in necessitates the restoration and rebuilding of the human rights culture that has been brutally decimated by Duterte,’ PhilRights executive director Nymia Pimentel-Simbulan says

MANILA, Philippines – The next administration will face the challenge of restoring the human rights culture “decimated” by President Rodrigo Duterte, a group said months before Duterte steps down from the presidency.

“The situation we are in necessitates the restoration and rebuilding of the human rights culture that has been brutally decimated by Duterte,” she said.

Simbulan’s statement was part of PhilRights’ documentation of the extrajudicial killings (EJKs), titled “The Killing State: Remembering is Resistance.” The document covered the EJKs that occurred in the country since Duterte rose in power in 2016 up to the present.

PhilRights is the research and information center of the Philippine Alliance of Human Rights Advocates. It mainly focuses on fighting for “just, democratic, peaceful and prosperous Philippines founded on a culture of human rights and gender equity.”

The report added that the so-called human rights crisis under Duterte would have longer impacts.

“The report concludes that this human rights crisis, ‘one that has caused and is continuing to cause suffering,’ will have ‘manifold impacts in the years to come.’ The damage ‘will be long-term, not only on the meltdown of democratic safeguards but also on civic behavior.’” the report said.

Since Duterte launched the bloody drug war in 2016, rights groups have counted at least 7,000 deaths. However, of all these cases, the Philippine National Police only opened 61 cases to the justice department for investigation.

Meanwhile, based on the numbers tallied by rights group Karapatan, there are at least 414 victims of extrajudicial killings in the country from June 2016 up to July 2021. Of this number, 211 were activists.

In September this year,  the International Criminal Court’s pre-trial chamber opened its investigation into the Philippine drug war. The scope of the probe would not be limited to the war on drugs launched in 2016, but would also cover the killings of the so-called Davao Death Squad when Duterte was Davao City mayor and vice mayor. – Rappler.com