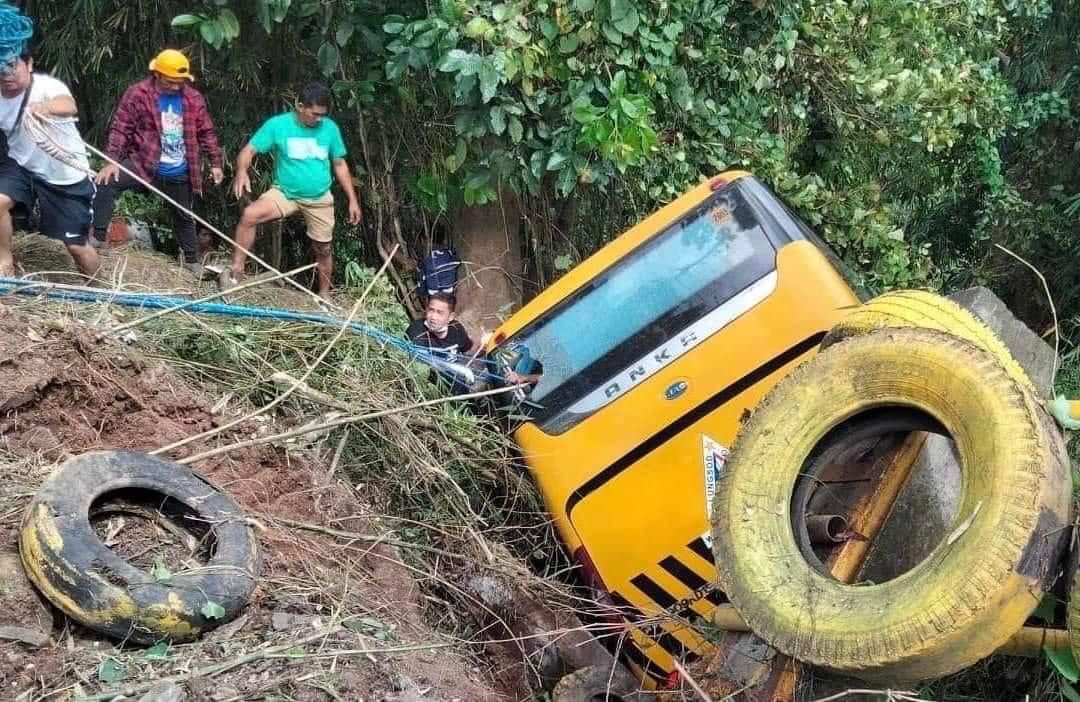 ROAD MISHAP. Responders at the accident site in Orani, Bataan.

Facebook Twitter Copy URL
Copied
'One of the participants, a teacher of Payatas B Elementary School, was declared dead on arrival at the Orani District Hospital due to a fatal injury,' says the School Division Office of Quezon City

MANILA, Philippines – One teacher died and over 20 others were injured when a bus carrying teachers from Quezon City had brake malfunction and fell into a ravine in Orani, Bataan, on Saturday, November 5.

The School Division Office of Quezon City (SDO QC) said in a statement that the group was part of the three busloads of public elementary and secondary school teachers that left the San Francisco High School Compound in Quezon City on Friday, November 4, to attend a Gender and Development activity in Sinagtala Resort in Orani, Bataan.

It said that 15 minutes after leaving the resort on Saturday, the bus, “while negotiating a very sharp curve, lost its brakes and plunged into a 15-meter ravine causing various injuries to the passengers.”

“One of the participants, a teacher of Payatas B Elementary School, was declared dead on arrival at the Orani District Hospital due to a fatal injury,” it said.

The bus driver was held at the Orani Police Station for questioning.

SDO QC said that another bus arrived on Saturday to fetch the rest of the injured passengers so they could be brought back to Quezon City for further treatment, and to be brought to their respective homes.

The Quezon City government and SDO QC said they will shoulder the medical expenses of the injured and will provide financial assistance to the family of the deceased.

The bus that figured in the accident carried a total of 48 passengers – 46 teachers, the driver, and his alternate.

A total of 141 public school teachers of Quezon City joined the out-of-town activity. – With a report from Randy Datu/Rappler.com