President Ferdinand "Bongbong" Marcos Jr., who was joined by Speaker Martin G. Romualdez and Caloocan City Mayor Dale Gonzalo Malapitan waves to his supporters to thank them for the warm welcome extended to him during the 159th Year Birth Anniversary of Gat Andres Bonifacio Wednesday morning at the Pambansang Bantayog ni Andres Bonifacio in Caloocan City. Photo from PPAB

MANILA, Philippines – On the 159th birth anniversary of the father of the Philippine Revolution, President Ferdinand Marcos, Jr. called on Filipinos to be “dutiful and law-abiding citizens” who work for a “bright and freer future” for everyone.

Marcos headlined the celebration of Andres Bonifacio’s birthday on Wednesday, November 30, at a monument dedicated to the hero in Caloocan City.

“The shackles that once held our forebears may no longer constrain us, but we must remain vigilant in protecting our country from social ills and other elements that threaten our liberties,” Marcos said in a written statement released before the morning’s events.

Bonifacio Day is a holiday in the Philippines. Across the country, labor groups and activists commemorated his birth anniversary with protests calling for better living conditions, higher wages for workers, and lower prices of basic goods. 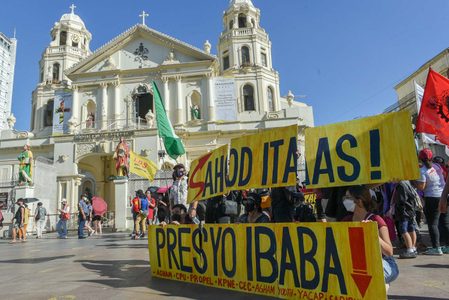 In a short speech before a crowd that included Caloocan City officials, the diplomatic crops, the defense sector, and other branches of government, Marcos said it was every Filipino’s responsibility to live out Bonifacio’s values.

(As beneficiaries of the freedom they had fought for, it is the responsibility of every Filipinos to ensure that the spirit of their goals remains alive, and to ensure peace, freedom, and prosperity in our land.)

(Let us strive to be our best selves; to be Filipinos whose loyalty to and love for the country equal that of heroes like Gat Andres.)

Unlike his contemporaries in leadership roles – upper middle class men who were educated overseas – Bonifacio was of lower middle class stature. “His educational attainment and military expertise may not have been equal to that of other heroes but his love for the country was absolute,” writes the National Historical Commission of the Philippines (NCHP) of the hero.

(As we continue to face modern-day challenges, we hope that Bonifacio and our heroes would become our models, then and now, so that we may succeed in our goals.)

In a statement, Vice President Sara Duterte called on Filipinos to emulate the courage and heroism of Bonifacio.

“May the fire he started in the name of freedom rekindle a deep sense of patriotism among us as we usher in a future strongly forged by our unyielding solidarity and our own acts of selflessness, courage, and bravery for our country and our fellow Filipinos,” Duterte said.

“May his extraordinary love of our country continue to inspire us to be constantly united in overcoming the difficulties we face as a nation and realize our shared aspirations of a better life for all,” she added. – Rappler.com