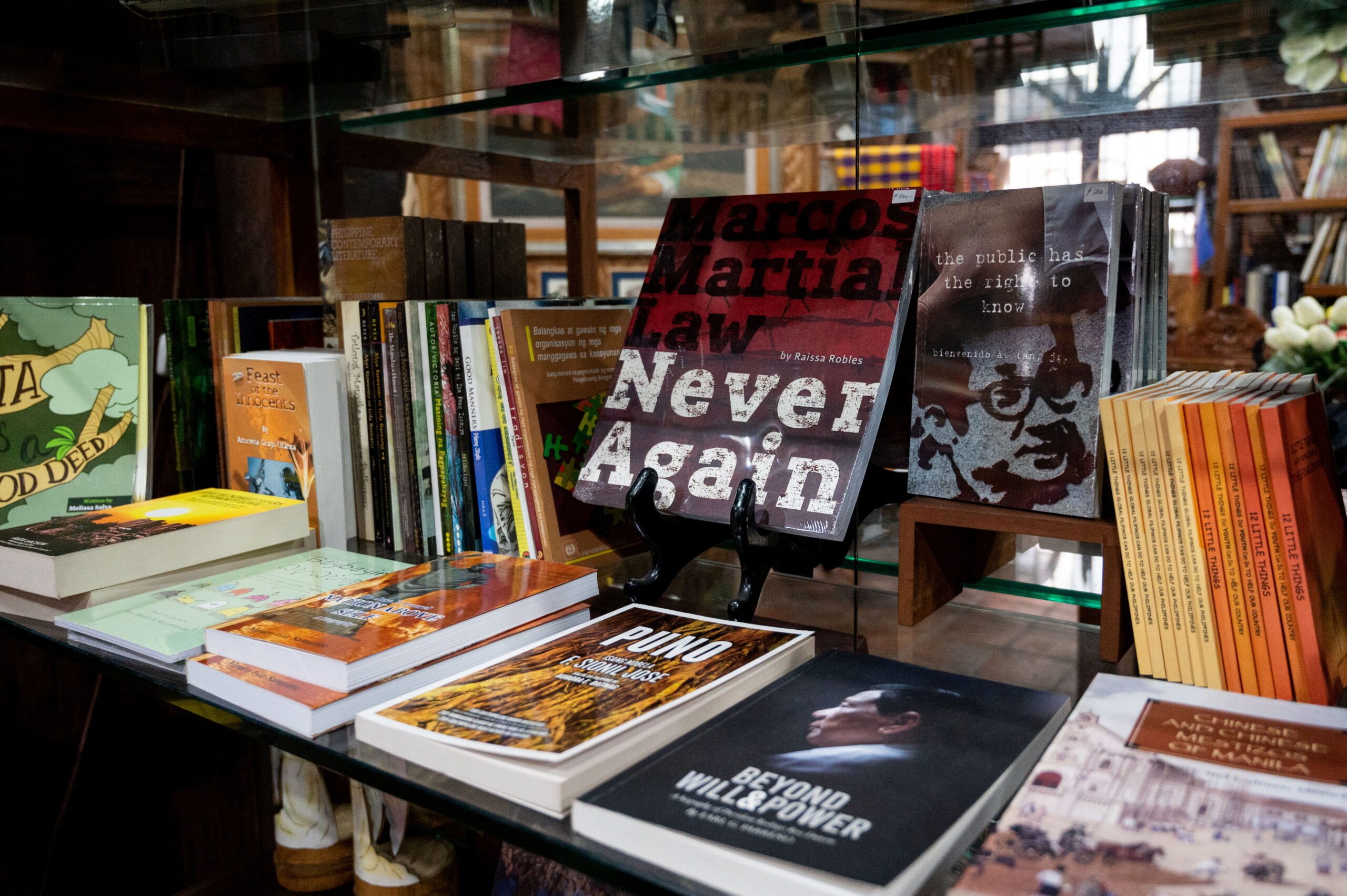 A book on martial law under the late dictator Ferdinand Marcos is displayed at a bookstore in Manila, Philippines, May 19, 2022. Picture taken May 19, 2022. REUTERS/Lisa Marie David

Facebook Twitter Copy URL
Copied
On the day it became clear that Marcos Jr. had won the presidency, a book published in 1976 detailing corruption and abuses during the Marcos regime sold 300 copies, its publisher says

MANILA, Philippines – Books about the late Philippine dictator Ferdinand Marcos and his brutal era of martial law are flying off the shelves, spurred by “panic buying” after his son and namesake won a May 9 presidential election.

Ferdinand “Bongbong” Marcos Jr.’s presidency, set to begin on June 30, has many people worried about losing access to books and other accounts of his father’s rule, given his family’s decades-long effort to rehabilitate its name through what critics describe as a campaign of historical revisionism.

“They are panic buying,” Alexine Parreno said of her customers, many them parents buying books about martial law aimed at children.

“They are really worried and scared that the books will be pulled out and that everything will be revised.”

One shopper was Faith Alcazaren, a mother of two, who picked up extra bundles of books to send to friends overseas.

“I felt like the smallest thing I can do and have control over is to protect the truth,” she said.

Thousands of opponents of the senior Marcos were jailed, killed, or disappeared during martial law, from 1972 to 1981, when the family name became synonymous with cronyism and extravagance as billions of dollars of state wealth disappeared.

The younger Marcos has called for a revision of textbooks that cover his father’s rule, saying they are teaching children lies.

“We already thought that textbooks and the teaching of history in basic education was woefully inadequate in terms of explaining to our youth and children what the martial law period meant,” said Ramon Guillermo, a professor at the University of the Philippines.

“If the Marcoses come back to power and Dutertes are supporting them, we could even have a more difficult situation in teaching what really happened,” said Guillermo.

Guillermo, with a group of fellow scholars, launched a manifesto last week pledging to combat attempts to falsify history to suit the Marcos narrative, and to oppose all censorship and book-banning.

“Never Again!” was the battlecry of millions of protesters who joined the historic People Power Revolution that toppled the 20-year dictatorship in 1986, when the senior Marcos and his notoriously extravagant wife, Imelda, fled with their children into exile in Hawaii.

“History cannot be bought, but books about history can be purchased,” one book buyer said on Instagram.

“We will continue to fight historical revisionism.”

Marcos and Duterte-Carpio did not respond to requests for comment. In a 2020 media forum, Marcos dismissed accusations his family was attempting to rewrite history.

“Who is doing revisionism? They put it in the books, the children’s textbooks that the Marcoses stole this, we did this … what they have been saying about what we stole, what we did, not all of them are true.”

Years of investigation and legal proceedings followed the rule of the senior Marcos. The Presidential Commission on Good Government set up in 1986 has retrieved about $5 billion of the Marcos fortune, its chairman, John A. Agbayani said. Another $2.4 billion is still caught up in litigation, he said.

The younger Marcos fought the election with the slogan “Together, we shall rise again,” invoking nostalgia for his father’s rule, which his family and supporters have portrayed as a golden age.

His campaign rode what academics called a “tsunami of disinformation” with social media flooded with narratives playing down rights abuses and corruption under his father.

On the day it became clear that Marcos had won, a book published in 1976 that details corruption and abuses during the Marcos regime sold 300 copies, its publisher said.

More than a week later, 500 copies of the book, The Conjugal Dictatorship of Ferdinand and Imelda Marcos, were sold within an hour of being posted online.

“I wanted to make sure that inside our home, I can keep a version of the martial law era that has not been tampered with by their hands,” said college student Jose Anonat, who got the book.

In an indication of the sort of history re-writing that Marcos supporters want, Juan Ponce Enrile, the late dictator’s defense minister, said in a conversation with the younger Marcos that appeared on YouTube in 2018, that not one person was arrested for political and religious views, or for criticizing the elder Marcos.

The clip has been viewed more than 1.5 million times.

There were also attempts to remove the terms “dictator” and “kleptocrat” describing the elder Marcos on Wikipedia, said Carlos Nazareno, of the Wiki Society of the Philippines, part of a movement against disinformation.

Carmelo Crisanto, who heads an agency memorializing martial law victims, is digitizing documents relating to 11,103 survivors who were awarded reparations from seized Marcos family wealth. He hopes the database will be online by September, in time for the 50th anniversary of the declaration of martial law.

“These archives will be alive,” said Crisanto. “They will never be suppressed.” – Rappler.com