Michael Yang goes to Supreme Court to make Senate back off 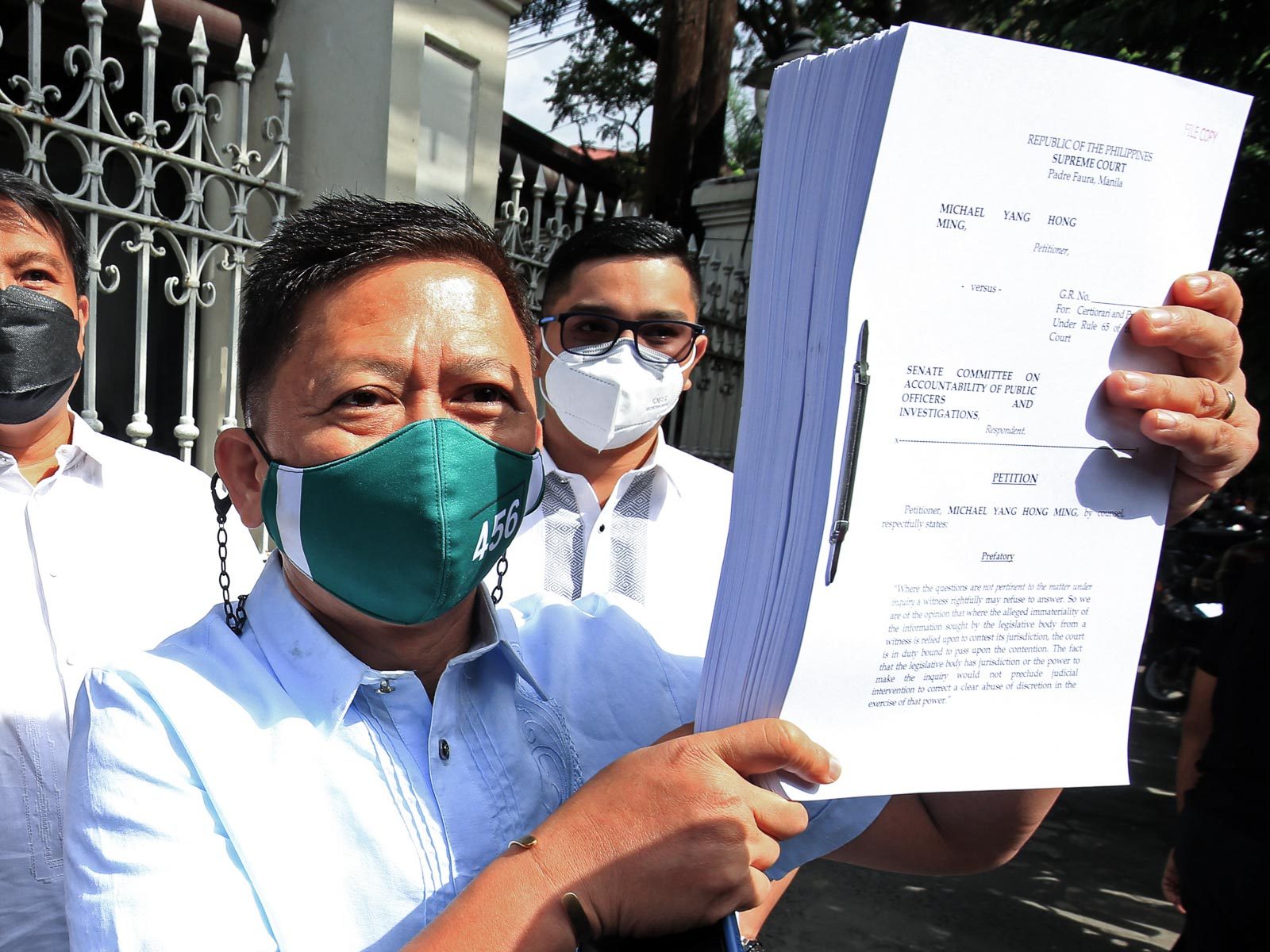 Atty. Raymond Fortun files shows to media a petition of Pharmally Corp's Michael Yang, that he filed before the Supreme Court on November 25, 2021, asking the higher court to declare as null and void the arrest orders issued by the Senate committee and a Lookout Bulletin issued by the Bureau of Immigration. 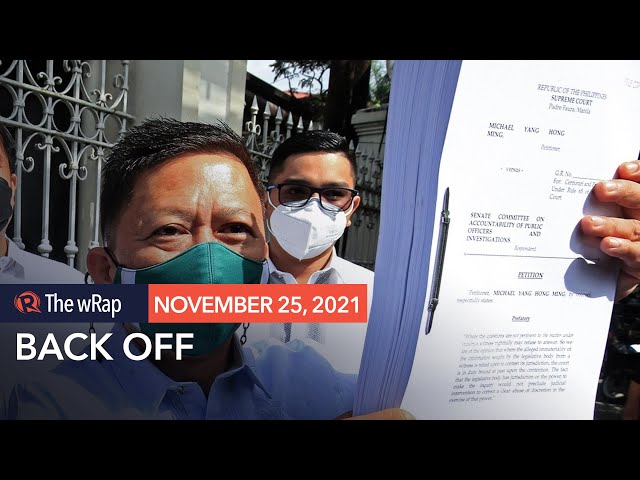 Chinese businessman Michael Yang, former economic adviser to President Rodrigo Duterte, filed on Thursday, November 25, a petition with the Supreme Court asking to void the Senate’s arrest orders and subpoenas against him.

“[The Senate] has now engaged in a veritable fishing expedition by asking for documents about Petitioner’s properties and business dealings,” said the petition.

Represented by Raymond Fortun, Yang anchored his petition on his right against self incrimination, right to privacy, and right to liberty.

Yang was ordered arrested by the Senate using the upper chamber’s contempt power to compel the businessman to attend the investigation into Pharmally Pharmaceutical Corporation, the biggest winner so far in the Duterte government’s pandemic procurements. Yang was the guarantor and sometimes financier of Pharmally, a newly opened, undercapitalized company that cornered a big chunk of contracts.

Yang’s petition is more personal, because the first petition filed before the Supreme Court asked to void a Senate power. It was filed by Pharmally executive Linconn Ong, who is under Senate custody on the basis of similar arrest orders.

Ong asked the Supreme Court to void the Senate’s power to hold in contempt witnesses it considers to be evasive, saying that it is very subjective to determine if a witness is being evasive.

Yang’s petition is more focused on his arrest orders, which has not been executed for difficulty of the Senate’s sergeant-at-arms in locating his address. Yang was last known to be in Davao City, where Pharmally executives Mohit and Twinkle Dargani were intercepted as they tried to leave the country.

Yang said in his petition the Senate cannot compel him to reveal details about his properties, assets, and even the addresses of his staff.

The monthslong and ongoing investigation had reached a point where it alleged that Yang, Pharmally officials, and former budget undersecretary Lloyd Christopher Lao did not file proper income tax returns.

“Unless and until it can therefore be shown in the proceeding that the acquisition of his private personal properties is related to his alleged involvement in, knowledge of, or complicity in the alleged misappropriation, or where the inquiry occurs in the setting of official law enforcement or prosecution, then the mantle of privilege must remain so that disclosure cannot be compelled,” said the petition.

Senator Risa Hontiveros, among the senators who steer this long-running investigation, said on Thursday she stands by the power of the Senate.

“The resource persons’ evasiveness and their resistance to cooperate with our investigation come at actual great cost to the government,” said Hontiveros.

Yang’s is the third Supreme Court petition related to the ongoing Senate investigation into the allegedly anomalous pandemic procurements of the Duterte government.

The second after Ong’s is a petition from the Senate itself challenging President Rodrigo Duterte’s ban on Cabinet members from attending the investigations.

The Supreme Court has so far just been requiring respondents to answer these petitions.

In earlier rulings, the Senate’s power to investigate had been upheld, but in a more recent ruling, the Court limited the Senate’s power of detention to only the period of hearings. Afterwards, the person must be released. – Rappler.com