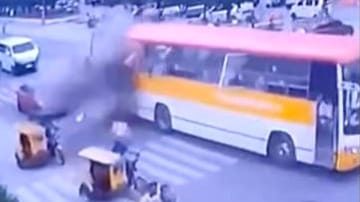 BLAST. A bomb goes off at the rear of a moving bus in Koronadal City in South Cotabato on Thursday, May 26.

GENERAL SANTOS CITY, Philippines – The military has linked the Dawlah Islamiya to explosions in Tacurong and Koronadal cities on Thursday, May 26.

The two cities are about 35 kilometers apart.

Police said a bomb went off at the rear of a moving bus in Koronadal City, hurting tricycle driver Wilfredo Iligan Tino who was behind it.

Another explosion near an eatery in Purok Paraiso, Barangay New Carmen in Tacurong City, injured no one but startled residents.

For days now, the military has been pounding with artillery and air strikes identified lairs of the Dawlah Islamiyah-Turaife Group in Sitio Patawali, Barangay Ganta, Datu Salibo, Maguindanao.

“We received reports that the leader of the group was seriously wounded,” Gubat said.

He referred to Abu Turaife, leader of a Dawlah Islamiyah faction who, according to the military, was wounded along with 17 other militants.

He said the remains of the slain BIFF members were turned over to local officials in Datu Salibo for burial. – Rappler.com