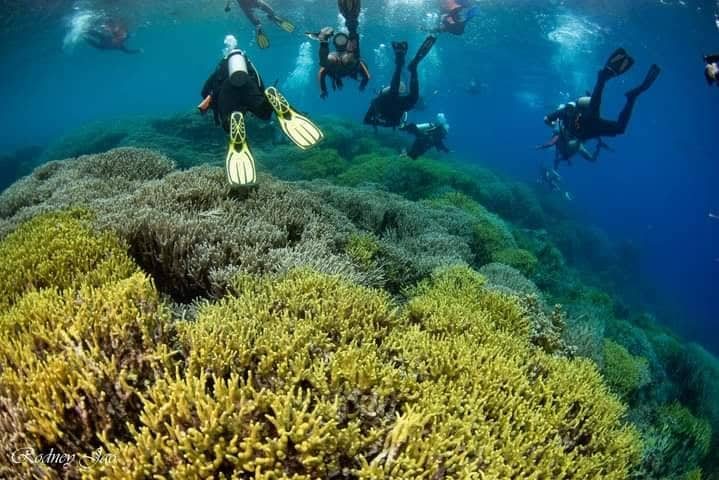 DIVE. Divers check coral reefs at a section of the Pujada Bay in Mati, Davao Oriental.

Facebook Twitter Copy URL
Copied
Organizers expect many freediving enthusiasts from all over the country to take part in the two-day diving event in Mati City, Davao Oriental

DAVAO ORIENTAL, Philippines – The Department of Tourism (DOT) and the city government of Mati have teamed up to hold the first-ever two-day diving festival in the city to promote Pujada Bay as a major tourism destination.

The “Bay Deep Mati Freediving Festival” in Mati City, Davao Oriental, would be staged on September 25 to 26, and would be open to certified freedivers in the country, Dondon Uyan, one of the organizers of the event, said on Friday, September 9.

The DOT’s regional office has also stepped up the campaign. Its teaser read: “Get your fins and masks ready, and discover the hidden gems beneath one of the most beautiful bays in the world, the Pujada Bay, located in the City of Mati.”

The DOT in the Davao Region is headed by Tanya Rabat-Tan, a scion of an old and politically influential landed family in Mati.

Uyan said organizers expected many freediving enthusiasts from all over the country to take part in the two-day diving event.

Freediving is going in the water, even in the deep, without breathing equipment.

“This will surely be a big boost to Mati tourism,” Uyan said.

The diving festival was organized to assure the public that the waters of Pujada Bay have remained generally clean despite findings about high levels of bacteria and other pollutants in certain sections of the bay due to human and industrial activities.

Local officials have downplayed the problem but have assured that measures were in place to keep the waters of Pujada – adjudged as one of the world’s best bays – pristine.

Uyan said the freediving festival would also be a part of a campaign to “raise consciousness, especially among locals, to protect and preserve our world-renowned crown jewel, Pujada Bay.”

The city government said it has instituted measures to protect the bay. These measures include the following:

City hall has also built a water treatment facility at the densely populated coastal village of Barangay Sentral to keep polluted water from reaching the bay.

But in the study “Nutrient Mapping of Pujada Bay” by a group from the state-run Davao Oriental State University (DOrSU), researchers warned of “reduced productivity and declining marine life diversity” in Pujada Bay because of pollution.

They also said levels of disease-causing microorganisms such as E.coli were “higher than the standard of <1.1 MPN (most probable number) on declared protected areas.”